Bev advised we had some broccoli we needed to eat and I had just saved a recipe for Beef And Broccoli from Cathy over at Wives With Knives. We had some flat iron steak in the freezer and all of the other ingredients on hand, so we were ready. We followed Cathy’s recipe as written except Bev decided she wanted the steak grilled. So after removing from the marinade, I grilled it to an internal temp of 110* and put on a cutting board to rest while I heated the wok. After about 5 minutes, I sliced it thinly cross grain. 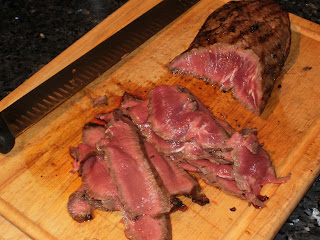 Bev had blanched the broccoli earlier in the day and decided she wanted to add some water chestnuts to the mix. Rather than beginning with the meat in the wok (since it was grilled), I started with the onions and ginger, then the sauce (to which I added 2 tbsp of the marinade), and finally the meat, broccoli, and water chestnuts. I stir fried this mixture for a couple of minutes and we served over rice. 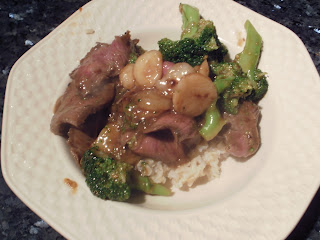 I rarely want to cook Chinese because I don’t have the recipes to make a really good dish, but I have one now – thanks Cathy, it was delicious.