When I saw the recipe for this over at Thibeault’s Table, I new I had to try it soon - Cathy over at Wives With Knives blogged about it yesterday. Ann used ham in hers, but since I had no ham, I substituted bacon (my very favorite meat) and if you know me at all, you know I made it for breakfast.

When I went to the potato basket, I had a choice between a very small Yukon gold and a pretty big russet potato, so I opted for the russet and cut it in half for two meals. After scooping out the potato, I put the white part of the scallion, some cheese, butter, and crumbled bacon in the hole. I added the egg, topped with more cheese and bacon and baked until the egg was set, then topped with green onion (I forgot the cream). 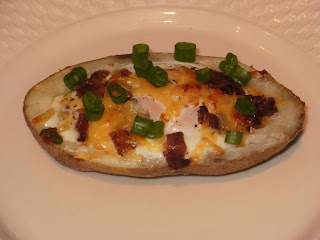 I thought it was delicious with the only hard part knowing when the egg is just right. Next time I’ll make sure I season the tater prior to adding anything to it.

And what did I do with the other potato half and the scoopings from the first half. Same ingredients, different presentation plus a few drops of garlic Tabasco. 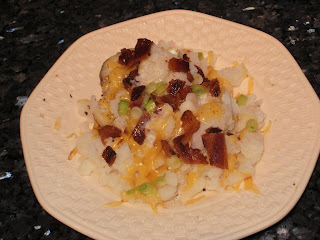 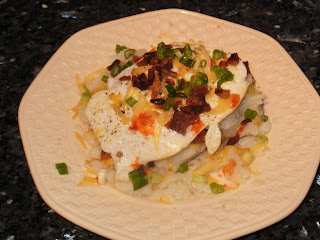