Last year, I was asked if I could support a local Lions Club with a fundraiser to raise money to buy glasses for those in need, and I ask how I could help? They said they were going to sell BBQ dinners but they needed a donation to rent a building in which to have it. I said I could help but then asked where they were getting their BBQ, to which he replied that he and a couple of other members had big crock pots to make it in. I think he said some other words, but I’d quit listening when he used the words barbecue and crock pot in the same sentence.

Let me get on my soapbox for a few sentences. If you’ve been around this blog for at least a month, you probably know I’m a BBQ’er, and I’m somewhat of a purest about it, which for me means, BBQ is meat cooked low and slow over indirect heat with the heat provided by wood or charcoal and everything else isn’t BBQ – like I said I’m a purest but I realize some good que is made in electric and gas smokers – but not ovens or crockpots. I admit that a pork butt cooked in a crock pot and topped with BBQ sauce or a slab of ribs cooked in the oven can be very good eats - I just wouldn't call them BBQ (my opinion again).:) So, he and I discussed it a little more and we decided I’d provide the BBQ rather than the building and all the feedback says it was a hit.

The above two paragraphs were written with tongue in cheek and intended to be humorous. Bad thing about the internet is you couldn't see my grin as I wrote it.

So when they called to see if I’d be interested again this year, I said of course and the very next week the local stores put there chicken and pork butts on sale – a good omen. The Lions like to furnish big sandwiches, so I only figured three per pound of meat and for the tickets they sold, it works out to about 44 pounds of raw pork and 16 pound of raw chicken, which really isn’t a large amount. I smoked the pork one day and the chicken the next. I like to “doctor” the meat after pulling with a few goodies so I pulled it myself.

I made sure I collected all of the meat juices and defatted them. After mixing the juice back in with the meat, for the first time I made no other adjustments (ie – dry rub, BBQ sauce, salt) - it was delicious as is.

This is the first butt off and we ate part of it for supper. Click on these shots to blow them up and I’ll bet they make you hungry. 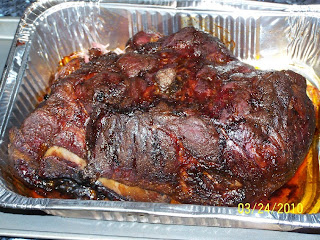 This is the part we pulled right off the butt to eat for dinner – when it’s at it’s absolute best. 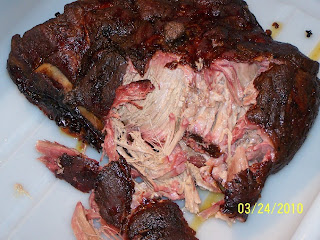 This is one of the two pans of pulled pork. 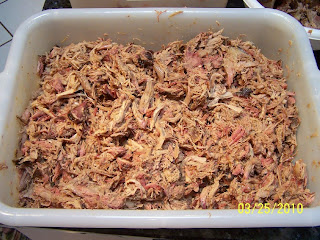 Here are pics of the chicken to be pulled and the wings. I used Texas Rib Rangers rub on the chicken and cooked the wings plain since they will get wing sauce later – I salted them when I took them off (forgot beforehand). 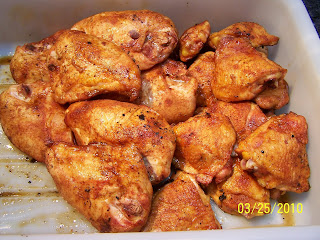 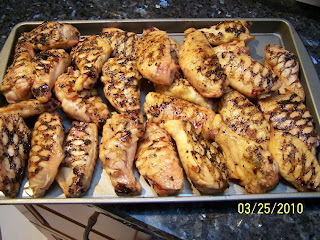 Nice grill marks huh. Now that they are smokey, we'll either grill or deep fry them to crisp up the skin, then toss in wing sauce. 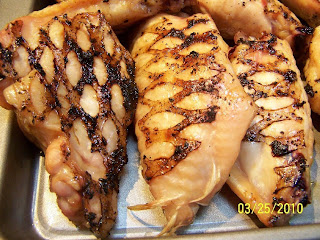 Back to dinner, this is Bev’s plate – she’s a slaw on top person. 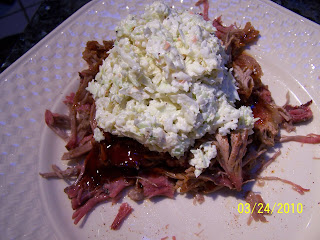 As you can see I’m a slaw on the side person although I can eat it both ways. We topped it with some Blues Hog BBQ Sauce – I usually don’t use that much sauce but I hadn’t had the opportunity to do my post-pull doctoring of the meat. 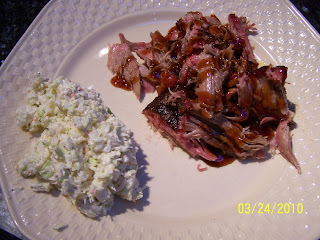 This sure is a winner for me as it provides an opportunity to give back to the community and do something I really enjoy in the process.