I’ve always loved fried green tomatoes and when I was growing up, my family often had them in simple fashion – sliced about ¼“, S&P, dusted with flour, fried in Crisco, eaten as an open faced sandwich on a slice of white bread.  They’ve come a long way since then and are now featured on many restaurant menus as appetizers, side dishes, and sandwiches usually with much more sophisticated coatings than mom’s simple flour.

I’ve tried many versions in restaurants and enjoyed most of them but have never been able to create a satisfactory coating at home so I decided to give Roz’s “The Best Fried Green Tomatoes With Garlic, Bacon, And Buttermilk Sauce” a try from her La Bella Vita blog.

I won’t reprint the recipe here but encourage you to stop by her blog for the details and some great photos – you really need to see her shots – then you’ll likely be heading to the store to pick up some green tomatoes.  I borrowed one of her pics to whet your appetite. 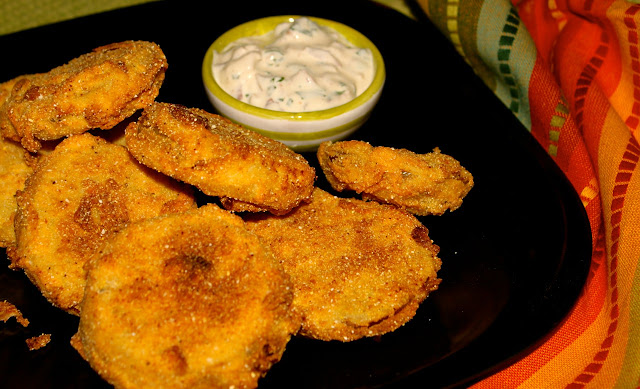 The only change I made to her recipe was in cutting the tomatoes about 1/3.”

Her blog also includes a dipping sauce recipe and a photo of tomatoes stacked with pimento cheese.  Since we had some smoked gouda pimento cheese on hand, I opted to try them both ways. 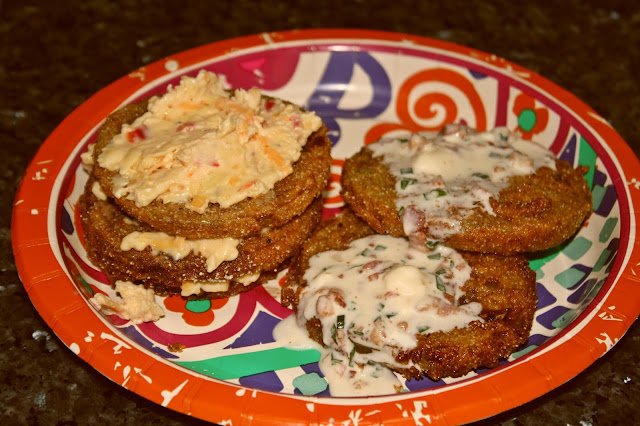 The tomatoes were delicious without any toppings so I have found my coating recipe and will make this the go-to version.  I deep fried them at 350 degrees but after reading this in Wikipedia – “Shallow frying is preferred, as the tomatoes do not float in the oil, which allows the weight of the tomato to press the cornmeal to the underside of the tomato.  This negates the need for a wash” – I’ll still use Roz’s wash but I’ll try pan frying next time to see which I prefer.

I followed the sauce recipe as written and next time would make two changes – First, I thought the bacon was a little overwhelming so next time I will use half as much and second, the sauce was overly salty, which may have come from the bacon so next time I will mix and let it set a while then salt to taste.  While I enjoyed the pimento cheese stack, I preferred the dipping sauce.