I could have included the lobster breakfast with these, but decided to leave it as a standalone – it was already in the queue. I had a lot of things that needed to be eaten including a lobster tail from Wende’s dinner, a piece of top round and four pork loin end pieces from my meat butchering day, a red pepper that was getting soft, an onion that was beginning to rot, a piece of boiled potato, and an unbaked mac & cheese that Bev made before leaving on vacation that I forgot to put in the freezer. I made them into three meals – four if you count the lobster breakfast.

Up first was a stir fry using the lobster, the top round, some of red pepper and onion. I cooked everything in the normal stir fry order, then stirred in the lobster at the end to just get warm.  Since there was plenty, I omitted a starch under it. 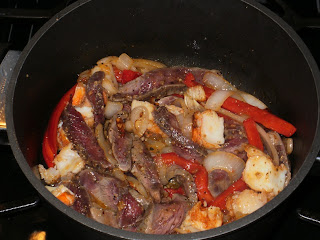 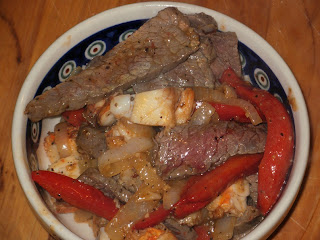 Meal two was pork loin hash using two of the pork pieces, the potato, some of the onion and red pepper. I just diced everything and tossed it in the pan with olive oil for a quick sauté, then you guessed it. 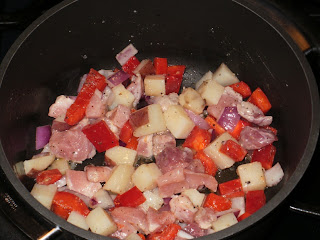 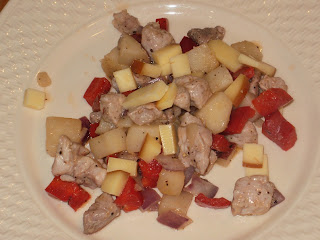 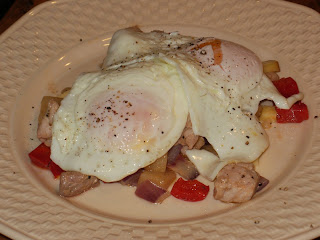 Meal three was the other two pieces of pork loin, some mac & cheese, and asparagus sauteed in butter with a topping of grated cheese.  I consided the chicken fried version of the pork, but I just seasoned it with S&P and Goya Seasoning, dusted with flour, and fried - don't need the extra calories. 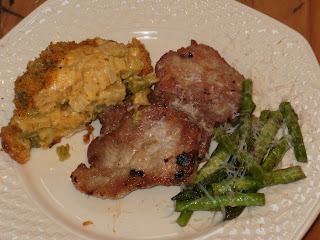 Not a bad way to clean out the fridge and I still have some beloved mac & cheese for other meals.

One year ago: Meatloaf and Basketball