On Monday, I posted about Katherines Bacon Cheddar Meatloaf and as good as it was, there is something I like better. 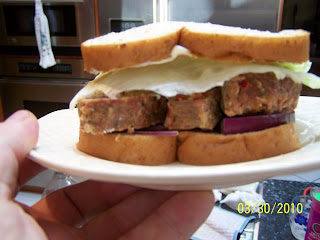 Thinly sliced onion (it’s a little hot), mayo, and lettuce – no need for other stuff as it’s already in the meat. Need I say more.

Several good sandwiches this week - fortunately one of my favorite meals.

I don’t know how the rest of you are making out, but over the past 2 to 3 weeks, I’ve won about $50 million, or at least that’s about what my email notifications add up to. I think I’ll wait til I get up to about $100 million and just collect them all at once.

AND NOW FOR A LITTLE SPORTS TALK

How good of a basketball coach is Bob Huggins? WVU has traditionally been a second tier, or lower, school when it comes to athletics. It’s located on the side of a mountain in nowhere West Virginia where the weather is usually rain or snow and, compared to many Universities, there is little to offer student athletes to entice them to come there. For whatever reason, the state of West Virginia does not seem to produce many top-notch high school atheletes and according to the football roster there are only 16 in-staters on the team - Florida and LSU each have about 60 in-staters. As a result, many of WVU's top players come from talent rich Florida, except WVU gets the players that are left after Miami, Florida, Florida State, and the rest of the local SEC schools take their picks.

The 16 man basketball roster has only one in-state person and six from the New York metropolitan area – I guess Morgantown may look pretty good to the inner city kids. But I suspect, these are not the area's top players but those who weren’t recruited by one of the big time programs.

So how good is Bob Huggins, he’s convinced some pretty decent players to come to Morganhole (as it’s affectionately called by many students – sorry Diane) and has coached them into the final four of the college basketball tournament. No matter what happens tonight, it’s been a great season and he’s done a superb job; and as a WVU alum, who came home (he was born in Morgantown) to coach his alma mater, he’ll hopefully retire from this job, and have many more good seasons before he does.

As someone who’s always been a supporter of the underdog, I’m hoping for a Butler- WVU championship game.

There must be a fishing tournament today. I have the doors and windows open and as I write this at 7:30am, I can here the 200hp bass boats screaming up the lake. I've never figured out how they can catch much at 70mph :).