Valentines Day In The Smokies - Part 1

For Valentine’s Day, Bev and I were alone and did one of the things we enjoy when we’re up in this area - we headed over the mountains to Cherokee, NC to make a little donation to the Eastern Band Of Cherokee Indians via a visit to their tribal owned Harrah’s Casino.  While we had limited cooking options, I did manage to whip up a little breakfast for My Valentine before we started our adventure. 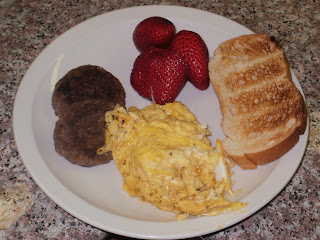 When we started up the mountain it was 50* in downtown Gatlinburg and when we got to the top, at Newfound Gap, it was 42* with a very brisk wind - going up 3600' made a big difference.  Here's a shot over into NC, but the sun was wrong. 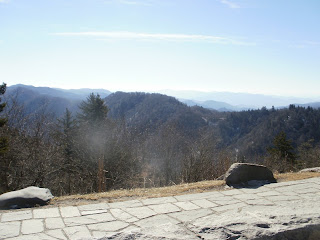 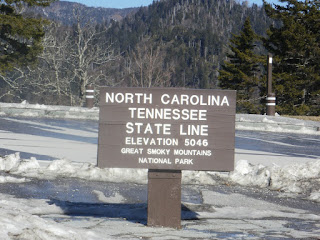 Note the large number of dead trees on the mountain in the background - they are hemlocks being ravaged by a little critter called a wooly adelgid.  When we got down into Cherokee, the temp was back up to 51*.

The casino was an impressive structure located just out of downtown Cherokee toward Maggie Valley, NC.  I'd planned to take a picture of the beautiful front entrance, but it was gone as they are remodeling to build a big new hotel and increase the gaming floor to one of the largest in North America, with what I'm sure will be an even more impressive entrance.  What's it tell you about the amount of money casino's make when they're spending $633 million to remodel.  As I understand it, every member of the tribe gets a significant check as a result of the casino, in addition to the jobs it provides. It’s easy to see from the increased prosperity of Cherokee why the Native American communities are choosing to do this.

The complex also contains the newly opened Paula Deen's Kitchen, which we had to give a try, even though we were underwhelmed by The Lady & Sons in Savannah.  From my web search, this is the third marriage of Paula and a casino (second Harrah's).  I had fried green tomatoes, which I liked and will look for her recipe, and a crabcake sandwich, which I won't try to find.  Bev had a shrimp Po'Boy which had a giant roll and 4 fried oysters.  Even though it was reasonably priced, I'd call it typical tourist food and will likely skip it on our next visit.

Tune in Saturday for the return trip to Gatlinburg and thanks for stopping by.