I had a few salmon scraps left from Wende’s birthday dinner and decided to turn them into breakfast. I first sautéed some red onion and when softened, added the salmon and some capers. 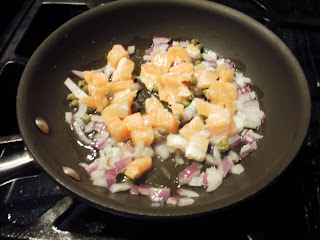 When the salmon was about done I added some diced pepper jack cheese, for a little heat, and two beaten eggs containing a little cream and dill weed. When I was thinking about this meal, I’d planned to use some lemon pepper, but I forgot it - damn CRS. 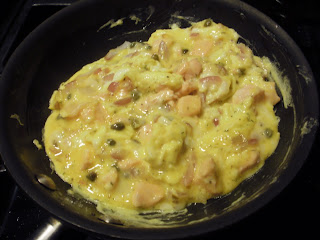 When the eggs were set, but still moist, I added them to the only bread I had – a pre-warmed flour tortilla. I rolled it up and topped with a dollop of my salmon spread, which I spread across the top after taking the photo. 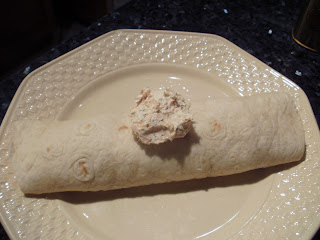 It was delicious. I tried a bite without the spread and thought it was better with it. The previous day, I’d made a similar scramble, less the tortilla, using the shrimp left from the same meal, except I seasoned with Emeril’s Essence as with the dinner meal.