We rarely have a February dry spell of sufficient duration to get the soil dry enough to till, but it happened this past week. Since I had no idea when I might get another chance, I just had to till the garden and plant a little.

I’d spread some composted horse manure on part of the garden last fall and as a result, I grew a healthy crop of Henbit (weed) over the winter. Previously I’d tried just tilling it in and it basically chopped each weed into 10 pieces and replanted them, so this time I gave them a dose of Roundup a few days prior to tilling. I’ll still have to deal with all of those seeds I turned up to the surface and it’ll likely take me a couple of years to get rid of all of them.

Here’s the before shot with so much green it looks like I sowed a cover crop - click on photos to enlarge.  When I remembered to take the picture, I'd already started tilling with my little Kubota mini-tractor .  It's basically a 4WD, diesel, lawn and garden tractor with a PTO and 3 point hitch - I love my little machine - a man's got to have a few toys. 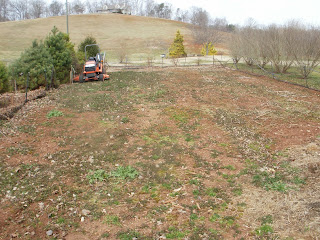 and the after shot – you can tell from the blacker soil where the compost went and why I like my little tractor. 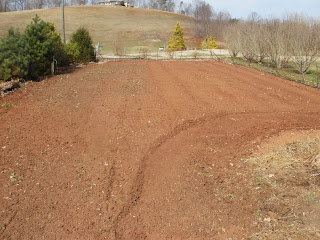 I love the look of fresh tilled spring soil.  Down in the far left corner, I planted some radishes, spinach, green onions, lettuce, cabbage, and kale.  If the weather holds, I may be able to get my whole spring garden in over the next week.  The garlic, planted in November, looks like it's ready to take off, so I fertilized it and the asparagus with composted turkey doodoo.

I rarely plant this early, but it seems to be getting hot earlier each year and I'm going to try to get things in the ground sooner so they don't bolt and deal with the cold and frost that will likely occur.

I got my tomatoes and eggplants sowed in the greenhouse, a few days late, but they'll be ready by the last frost date.  I often sow my seeds in individual pots so I don't have to transplant them but tomatoes benefit greatly from being tansplanted.  They are unique in that any part of the stem that gets buried will put out roots, making the plant stronger and healthier - so always plant them deeper than they were.  I filled each cell with Miraclegrow potting soil and set the tray in water so the soil could begin getting wet.  I firmed the soil a little and put 9 seeds in each 3"x3" cell then pushed them each a little to be sure I had good soil contact.  I topped with an eight inch of sphagnum moss, misted to wet it, and added the clear domed top.  I keep them in the warm green house during the day and bring them into the house at night. 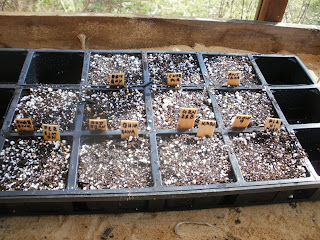 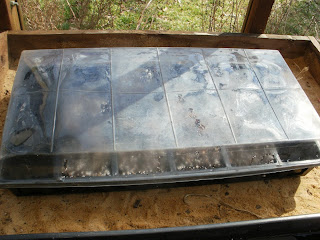 I also began the hardening off process for my lettuce and brassica's and cut my seed potatoes into pieces with 2-3 eyes each and set them in a shady spot in the greenhouse.  This will encourage faster sprouting than cutting and immediately planting them in the cool soil and it allows the cuts to scab over a little for protection.  They'll be ready to plant in a few days. 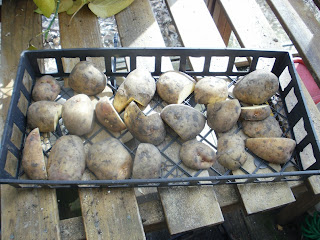