With the daffodills coming up in the woods beside the house, I decided it was time to replace the snowy dock scene.  Spring can't be too far away.

Since its pretty much same-ole-same-ole, I usually don’t post much about my barbecuing anymore, but this month was a little different. I didn’t have a lot to cook, but I did it in a way that took longer than normal so I could use multiple temperatures. I cooked poultry in the morning at 275*, sausage and pork tenderloin mid-day at 250*, and venison jerky & salmon in the evening at 200*.

While at Sam’s a couple of weeks ago with Bev and our friend Kathy, she picked up some canned chicken breast and asked how I thought it would be for chicken salad, etc. I asked her to please put that back and I would provide her the same amount of good smoked turkey on BBQ day – I wanted some turkey for myself for the delicious salad it makes.  It's not as pretty, but I like to season the cavity well and smoke the bird brest side down allowing the flavors in the cavity to moved down into the breast. 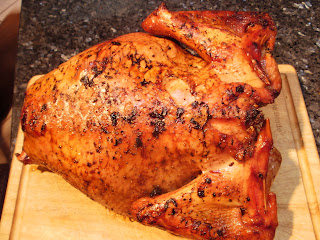 The dark meat from smoked turkey is more pink than brown. 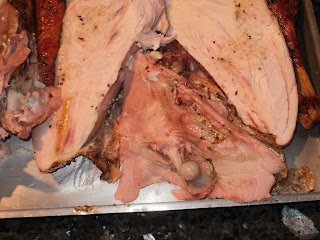 The mid-day items were just store bought breakfast sausage and pork tenderloin rubbed with my pork rub. I could have cooked them with the chicken, but wanted to cook them slower to provide more time in the smoke.

I had a venison hind quarter taking up space in my freezer for a while because I didn’t want to deal with all of the small muscles and silver skin to make it into jerky. But I decided the time had finally come and spent a couple of hours getting about 4 pounds of clean meat, then I partially froze it and sliced into 1/8” slices. I used Hi Mountain Seasonings Jerky Kit which contained the flavoring and cure. This brought on two new absolutes for my life – I will never again accept raw venison, unless it is back strap or made into a product like sausage and I will never again make jerky from a dry cure. It says sprinkle the cure on both sides of each of the slices, which is way too much work – it’s wet cure from now on.  It turned out pretty good. 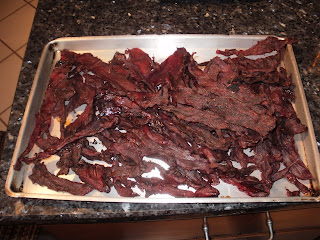 I was very pleased with the salmon spread I made a few days ago, but I did not like paying $1.25 an ounce for the salmon, so I bought some salmon and smoked my own and not only was it way cheaper, it was better – it was salmon spread for the Superbowl. I used the process from The 3 Men’s Fish Smoking Process except I took mine to 145* as it didn’t look right at 140, so it took about 3 hours. 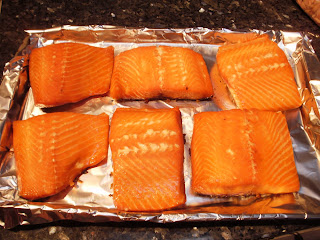 It was delicious and my new go-to smoked salmon process - I can only imagine how good it would be with fresh, wild-caught, Pacific salmon vs. the farm rasied in Chile version I used.