I had about 5 spears of peppers in a tablespoon or so of marinara sauce leftover from Friday nights pepperoni rolls and some Canadian bacon, pepperoni, mushrooms (which I forgot to use), and provolone cheese in the frig, so I thought my first ever pizza scramble was in order. I diced up everything and sautéed in a little olive oil for a few minutes to warm it – added the cheese at the end. While this was cooking, I beat up two eggs with a little cream, and when the cheese started to melt, turned down the heat and added them to the pan. I slowly scrambled them until set but still moist and they were ready to go. Sided them with a couple of slices of cheese toast from some French bread that needed to be used. 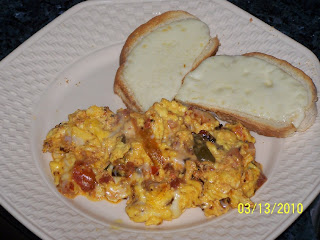 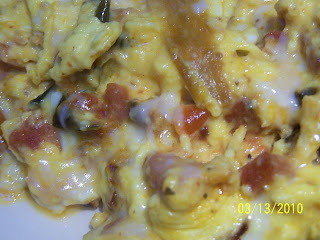 I hate I forgot the mushrooms and will add a little onion next time as well (maybe some olives too), but I still got to test the basic concept which was marinara in the eggs - I already knew the other ingredients worked. I have to say I thought it was absolutely great and it will be a regular feature on the breakfast menu around here from now on. You know what would really be outstanding - serve the scramble atop a hot piece of Cowgirl Jeanie's frybread - I can hardly wait to try it again. You really should consider trying this, using whatever pizza toppings you prefer.


Have a great day.