When I thawed out the package of tuna for the previous meal, I still had a 14oz. and an 8oz. piece left which I decided would feed three people so I saved it for our Friday get together – Joe, Cindy, and I ate tuna and Bev and Pat leftover Pasta Di Angelo.  I found another Asian recipe for Six-Minute Seared Ahi Tuna Steaks on the "Bowl Of Deliciousness" blog.

I increased the marinade amount by 50% to get the recipe below.

I had mentioned in the previous post that most tuna is gassed (with carbon monoxide) to achieve the bright red color and it's easy to understand why as ours looks like beef liver. 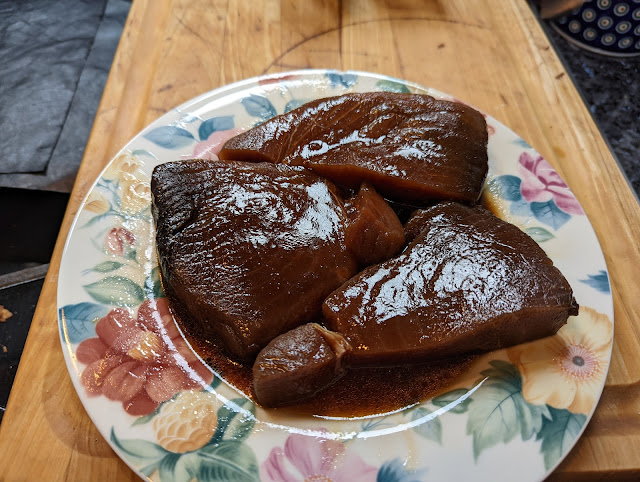 Seared Ahi Tuna Steaks – Adapted from A Bowl Of Deliciousness

1. Pat the ahi tuna steaks dry with a paper towel. Place on a plate or inside a plastic bag.

2. Mix the soy sauce, toasted sesame oil, and honey until honey is fully dissolved. Pour over the ahi tuna steaks and turn over to coat completely. Allow to marinate for four hours (in the fridge for an three hours and at room temp for an hour). 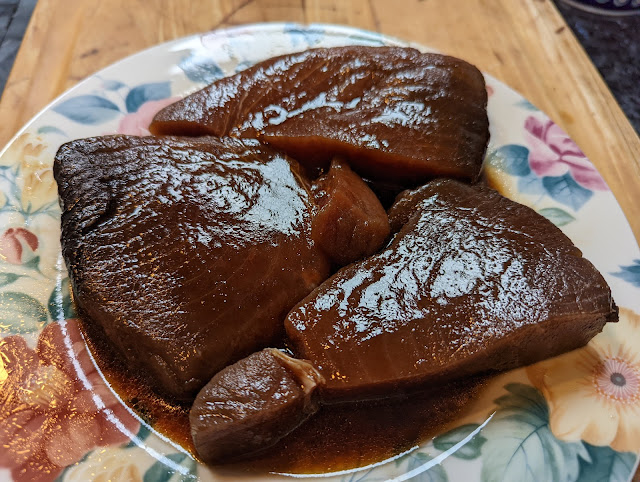 3. Reserve a spoonful or two of the marinade before coating the fish for drizzling on top after you've cooked it.

4. Heat a large skillet on medium-high to high until very hot (cast iron preferred but I used stainless steel)

6. Remove to a cutting board and allow to rest for at least 3 minutes. Slice into ½ inch slices and serve garnished with green onions, toasted sesame seeds, and a lime wedge. (Got too busy with the quick cooks to take pics)

We had a little under 1½ pounds of asparagus in the fridge and I decided to cook it Asian style and found a recipe for Grilled Soy-Sesame Asparagus at All Recipes.  I decided I didn’t want to grill it so I cooked it on the stove.

Soy-Sesame Asparagus – Adapted from All Recipes

1. Remove tough ends from the asparagus and cut into bite sized pieces.

2. Use a steamer insert in a sauce pan with water to cook until asparagus is nearly done (I did this ahead of time). 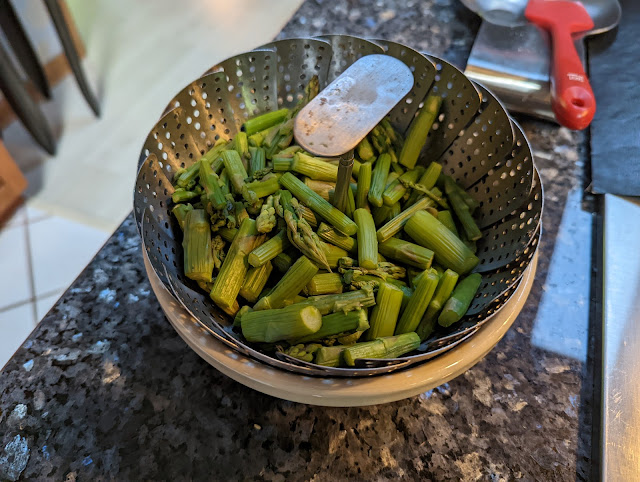 3. In a bowl, mix sesame oil, soy sauce, garlic, and brown sugar and set aside.

4. When ready to cook, add the sauce and toasted sesame seeds to a skillet and bring to a simmer. 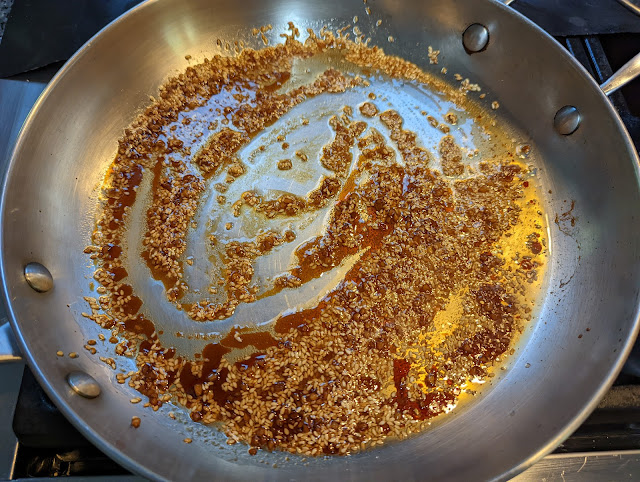 5. Add asparagus and cook until it is reheated, tossing often to coat with the sauce. (Got too busy to get a pic)

Plate everything and enjoy. 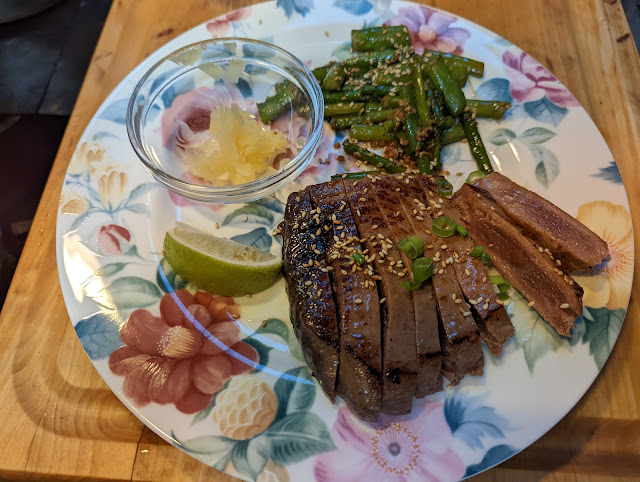 We all liked the asparagus this way and it went very well with the tuna but I could have used two pounds for the four of us.  We tuna eaters were really pleased with this dish as it was tender and very tasty - Cindy, who eats a lot of restaurant tuna, raved about it and Joe said this was the most memorable meal he has had in a long time so I think I would call it a hit in spite of the darker color.  While Cindy and I liked the previous tuna dish, we both liked this one a little more.

During the first 3½ months of 2022, I was on a pretty strict pre-hip surgery diet that didn't include eggs on many leftovers but I can do that now.  The other day, I topped some leftover Pasta D'Angelo with two fried eggs and it was delicious but the eggs completely covered the pasta so not much of a pic.  So today, I used the last of the pasta, made a well and added a single poached egg for another delicious meal and believe it or not, the egg could be tasted. 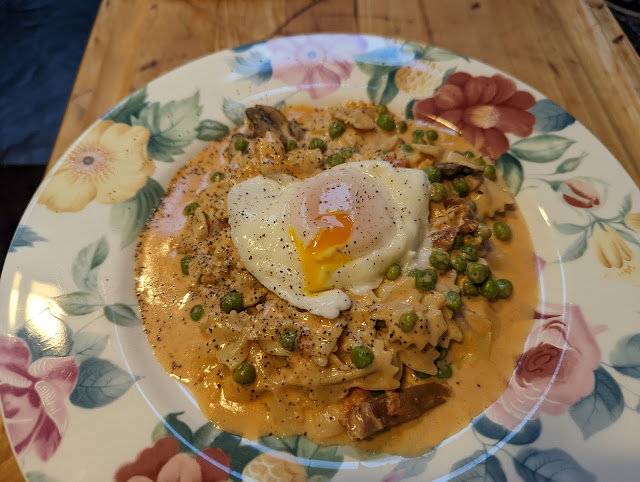