I’ve been wanting to make some Canadian Bacon for a while as I really like it and it’s a great meat for my diet – about 30 calories per ounce and no carbs.  I couldn’t believe it when I looked back and discovered that my last batch was in 2013.  In the past I have used a dry cure but this time I opted to use a liquid brine and after research I decided on the recipe from “Serious Eats” for “Maple Cured Candian Bacon.”  I followed the recipe as shown below which is half of the original.  I prefer to use the single muscle half of the loin but the one with two muscles on part of it is all we could find. 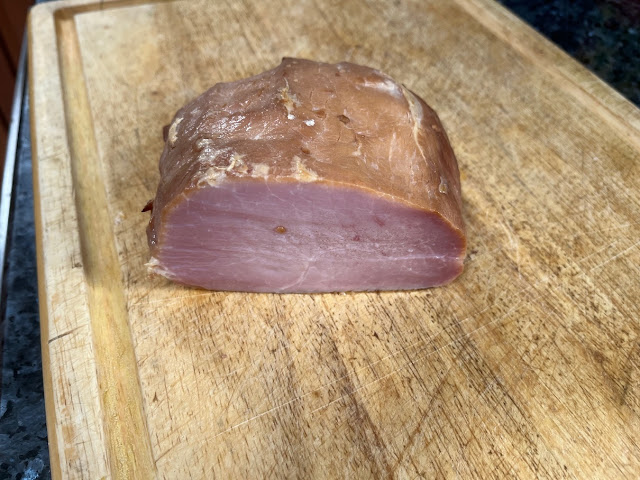 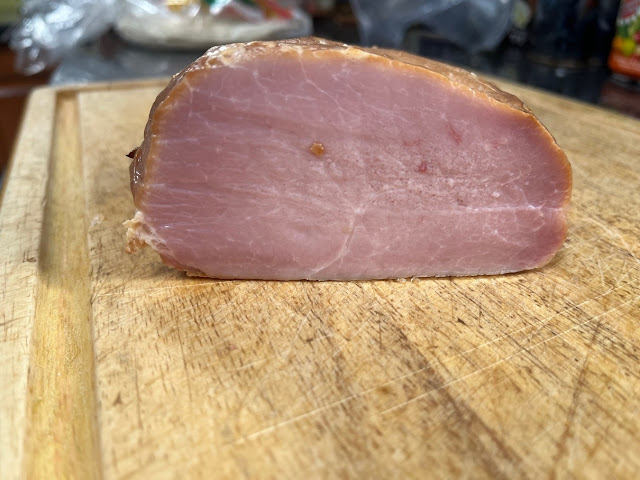 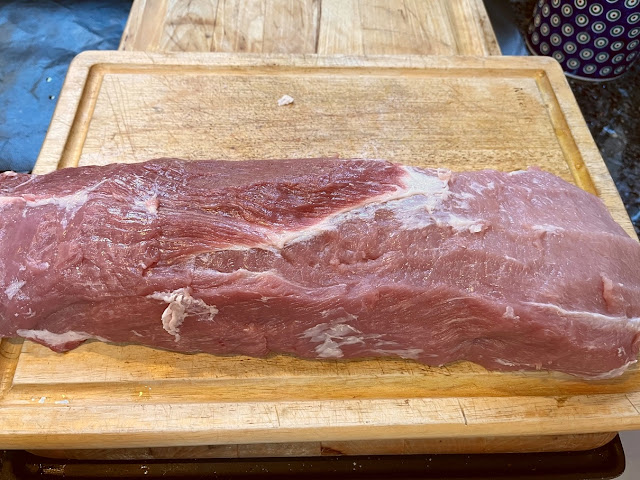 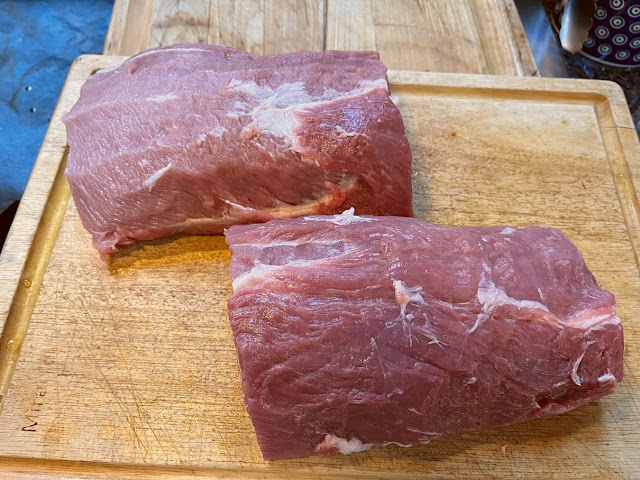 1. To make the cure, combine 1 quart of water, Kosher salt, maple syrup, brown sugar, pink salt, bay leaves, garlic, and peppercorns in a medium saucepan. Bring to a boil over high heat, stirring to dissolve salts and sugar. Boil for 1 minute, then remove from heat.

2. Add the second quart of cold water and place in refrigerator until completely chilled.

3. Using ½ gallon plastic bags or a large enough container, fully submerge pork loin in cure and let sit in refrigerator for 4 days.  If using a container, twice as much brine will likely be required.

I forgot a pic in the brine but it looked just like this except the water was brown. 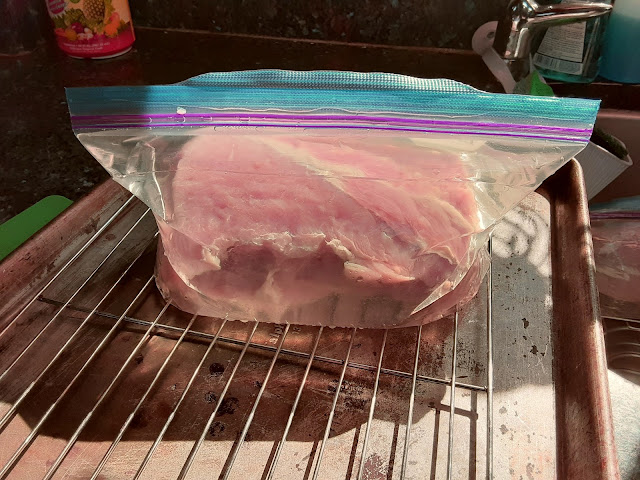 4. Pour out the cure and rinse the bags and the loins.

5. Return loins to the bags and add enough fresh water to fully submerge them. Let sit for 30 minutes, then repeat for another 30 minutes.  Remove pork from water and pat very dry with paper towels or air dry in the fridge. 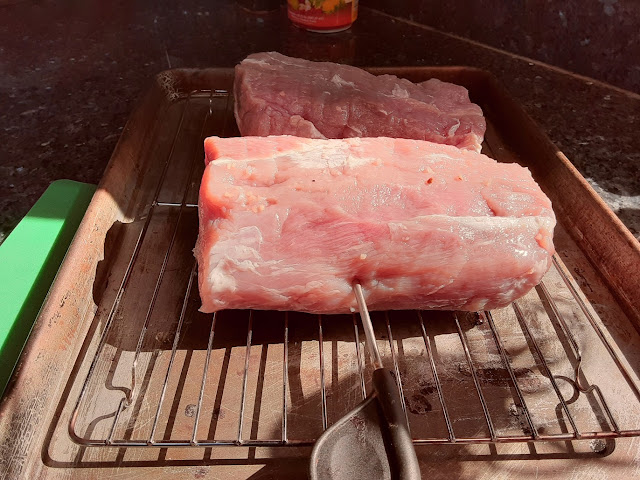 Fire up the smoker or grill to 225°F and cook until an instant probe thermometer registers 145 degrees, 3-4 hours.

It didn't get as brown as previously so I'll be sure the surface is very dry next time. 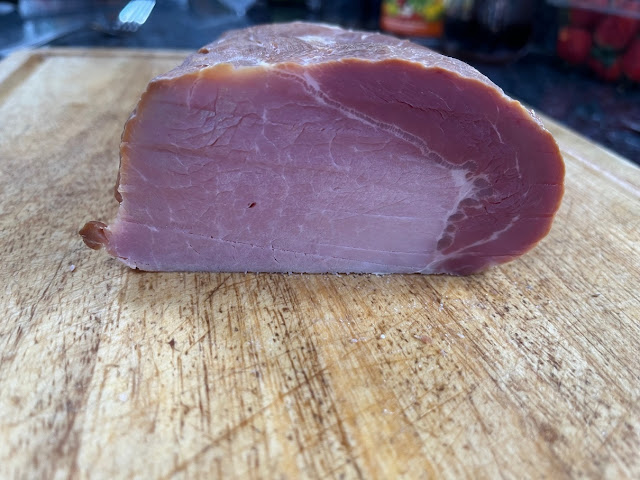 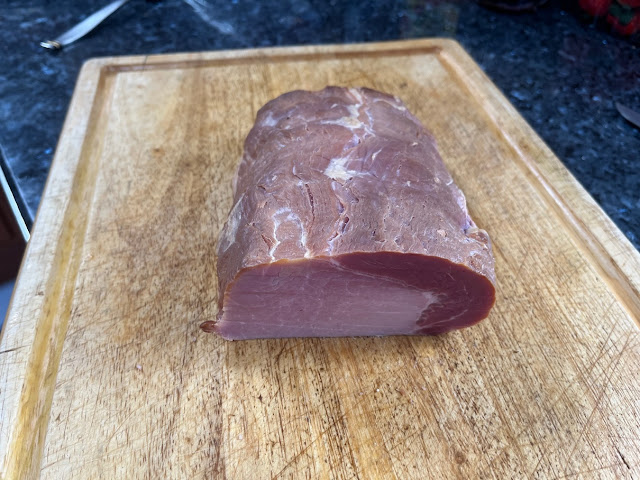 It turned out very good but it was a little salty so I added a second soak to the above directions.

Sliced 1/8" thick and just warmed in the microwave, the bacon went very well with a couple of sunny side-up eggs for breakfast. 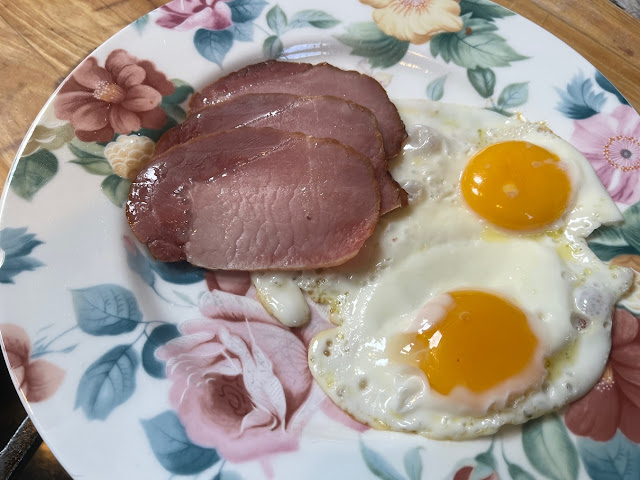