Many years ago, I used a recipe for French Onion Soup that cooked the onions in the oven for hours and it made a delicious soup.  When we wanted the soup again recently, I couldn’t find the recipe (I must have made it pre-blog) so I used another one and it wasn’t very good.  After a warm spell, a cold front came through and it was once again soup weather, so I went on line searching in earnest for the recipe and I found it.  The recipe is titled “French Onion Soup: The Cook’s Illustrated Way”  and it is shown below.  I followed the soup recipe as written but deviated for the crouton. 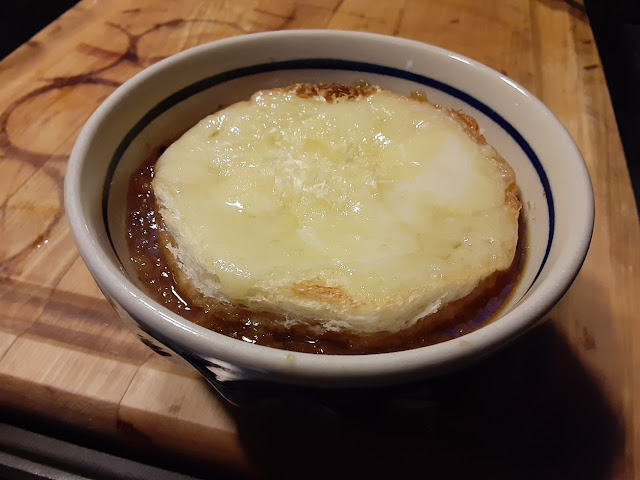 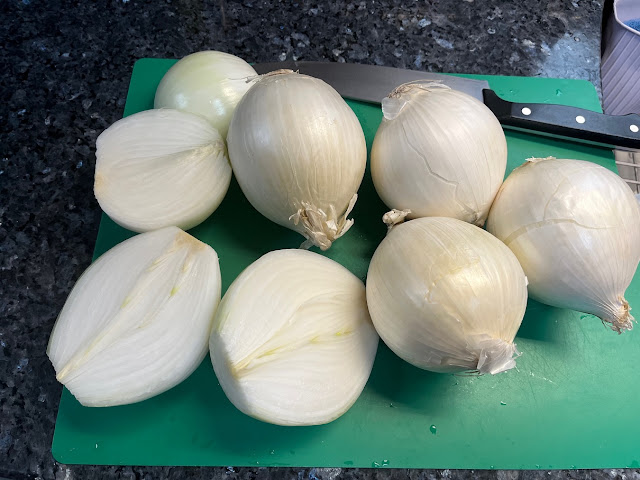 2 cups water, plus extra for deglazing

1 baguette, cut into 1/2-inch slices (homemade bread for me) 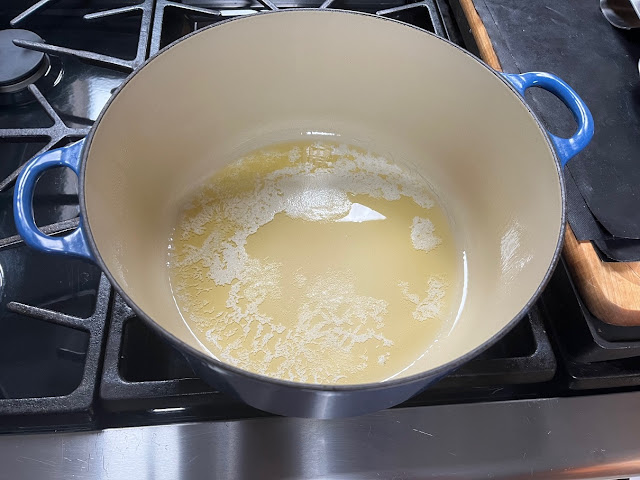 2. Place butter in pot and add onions and 1 teaspoon salt. 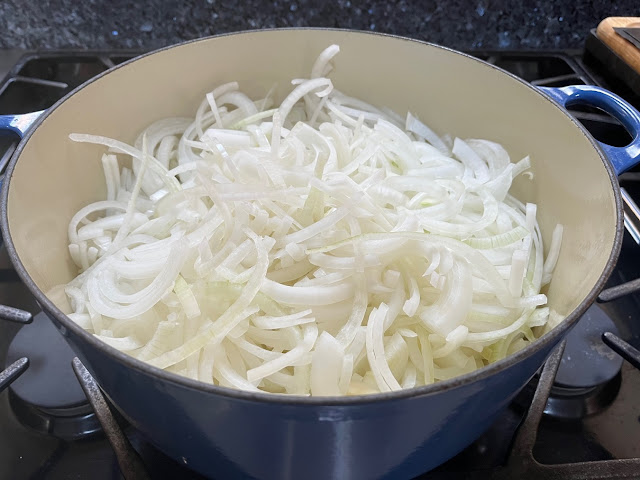 3. Cook, covered, 1 hour (onions will be moist and slightly reduced in volume). 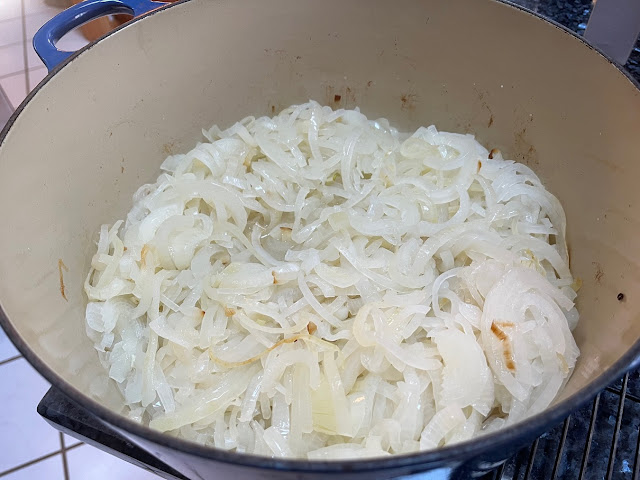 4. Remove pot from oven and stir onions, scraping bottom and sides of pot. Return pot to oven with lid slightly ajar and continue to cook until onions are very soft and golden brown, 2 hours longer, stirring onions and scraping bottom and sides of pot after 1 hour (I stirred every 30 minutes and ran the onions around the sides to get all of the fond). 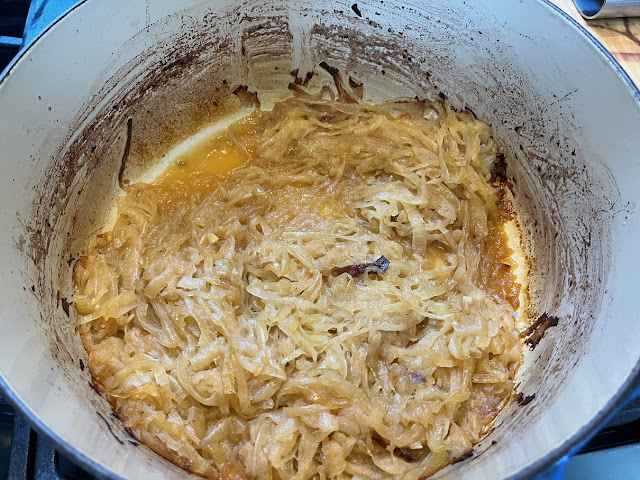 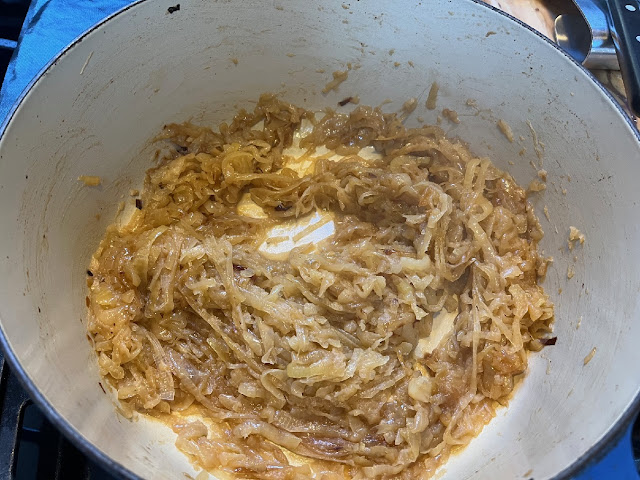 5. Carefully remove pot from oven and place over medium-high heat.

6. Cook onions, stirring frequently and scraping bottom and sides of pot, until liquid evaporates and onions brown, 15 to 20 minutes, reducing heat to medium if onions are browning too quickly.

7. Continue to cook, stirring frequently, until pot bottom is coated with dark crust, 6 to 8 minutes, adjusting heat as necessary. (Scrape any fond that collects on spoon back into onions.) 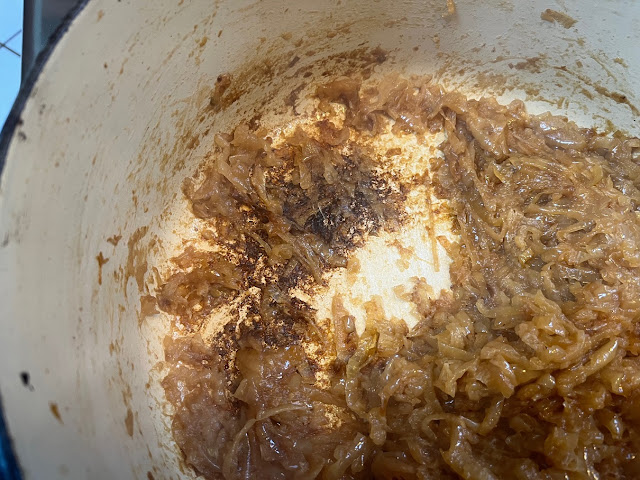 8. Stir in 1/4 cup water, scraping pot bottom to loosen crust, and cook until water evaporates and pot bottom has formed another dark crust, 6 to 8 minutes.

9. Repeat process of deglazing 2 or 3 more times, until onions are very dark brown (I used my flat bladed fish spatula for all of the stirring and fond removal to this point). 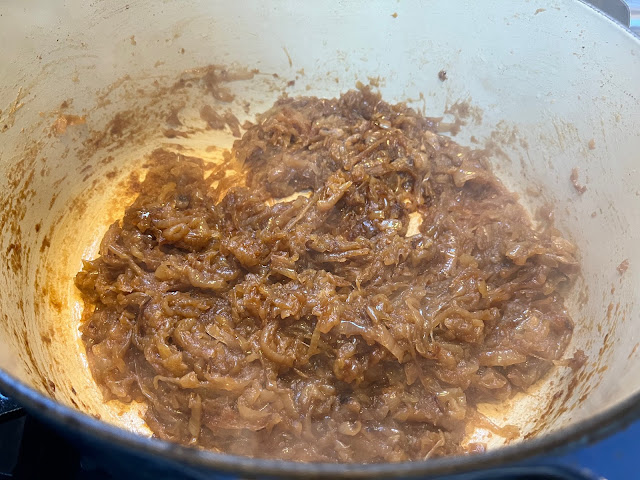 10. Stir in wine and balsamic vinegar, stirring frequently, until wine evaporates, about 5 minutes.

11. Stir in broths, 2 cups water, the thyme, bay leaf and parsley (tied with twine or wrapped in cheese cloth for easy removal from pot) and 1/2 teaspoon salt, scraping up any final bits of browned crust on bottom and sides of pot.

I forgot this pic

12. Increase heat to high and bring to simmer.

13. Reduce heat to low, cover, and simmer 30 minutes. Remove and discard herbs, then season with salt and pepper to taste.

14. While soup simmers, cut slices of (homemade) bread into circles that fit the bowl tops.

16. Add Swiss cheese slices and grated parmesan (or Asiago ) to the top of the toasted bread and broil until the cheese it melted.

17. Ladle soup into the bowls, add the crouton and serve. 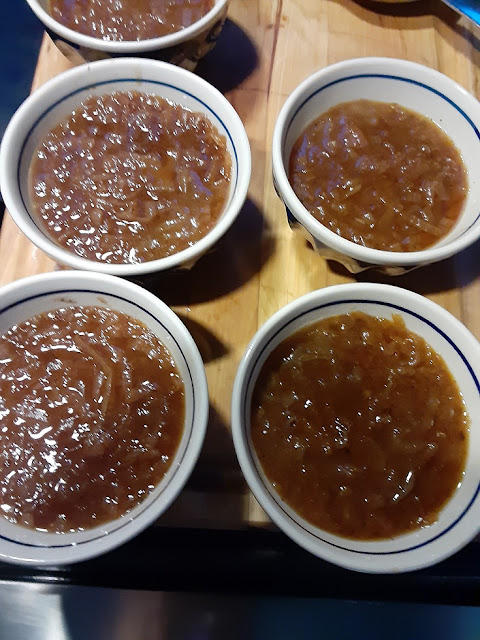 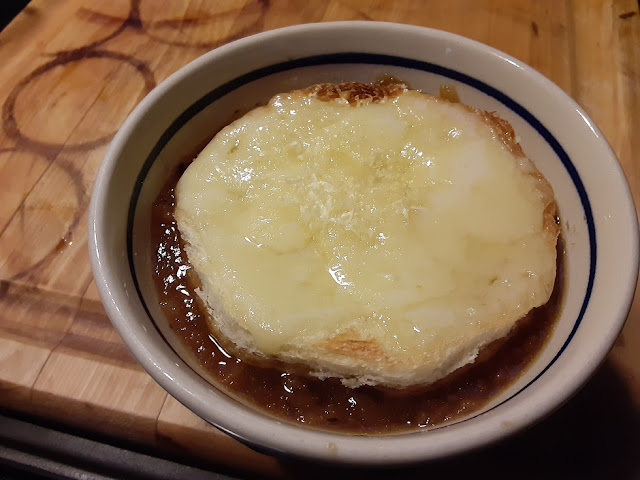 The consensus from the diners was “best French onion soup I ever had” and I agree.  The cooking process took four hours but it was well worth it (the first three hours were oven time).  If you really like French onion soup, this is the recipe for you.  The recipe made eight servings.

While not low-carb, without the cheesy crouton on top, it is low-cal and it was perfect for a cold day watching the super bowl.

As for the game, like most of the playoffs, it was close & exciting to watch but I wish the underdog Bengals would have won for their first time.