As I mentioned in the last post , I made carnitas so I would have them to make the Chuy’s Burritos that I had seen on Diners, Drive-ins, and Dives.  The secret to this burrito is the inclusion of a chile relleno in the stuffing and we started making them with our home grown poblano peppers.  With our first predicted freezing weather, Bev picked our remaining peppers and all of the poblanos on top came from a single plant. 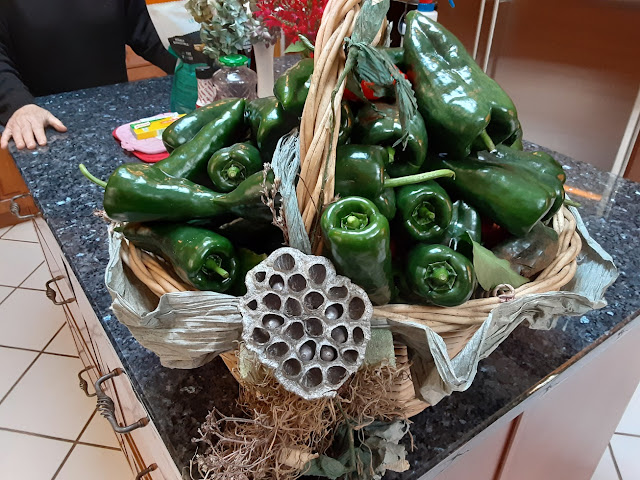 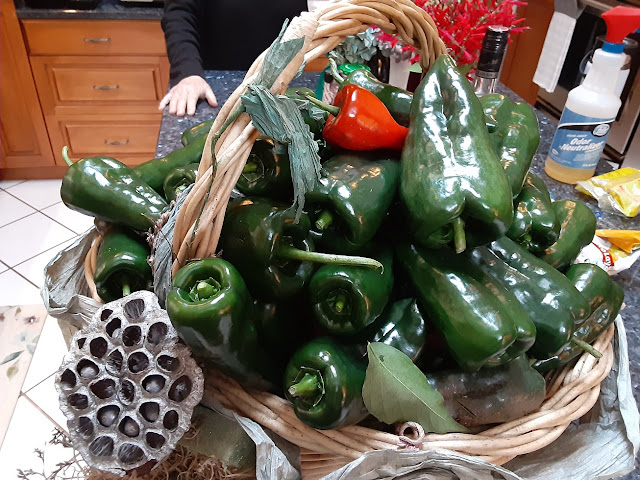 I picked out the six largest ones and the first step was to peel them. To remove the cellophane-like peeling from the peppers, we have always used the grill to char the skin to make it removable but this time I removed the stem and seeds first.  Here they are after charring. 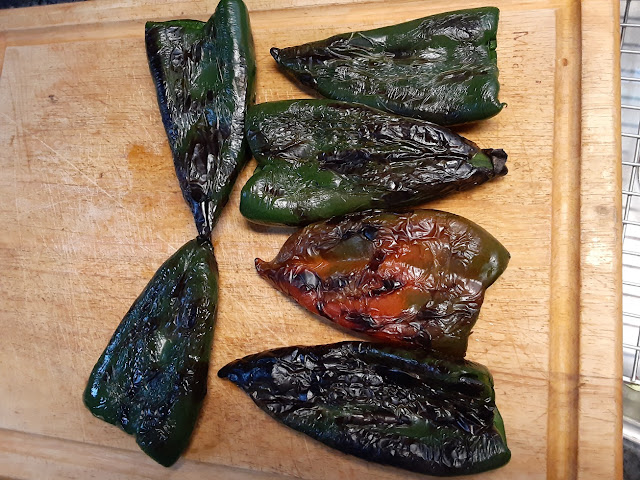 We used our own recipe for the pico di gallo, the relleno recipe from Isabel Eats, and we purchased some Molcajete Guacamole from the local Cielto Lindo restaurant.  This guac is chunks of fresh avocados, onions, tomatoes, cilantro, and lime juice.

We pretty well followed Chuy’s burrito assembly instructions except we put the pico di gallo and more cheese on the outside, mostly for looks.

1. Give the tortillas a quick nuke to warm them.

2. For the rellenos, I stuffed the peeled peppers with cheese, battered them, and pan fried in a large skillet until the cheese was melted and the outer part of the relleno wss crispy.  Then I cut them in half lengthwise so they would fill the tortilla. 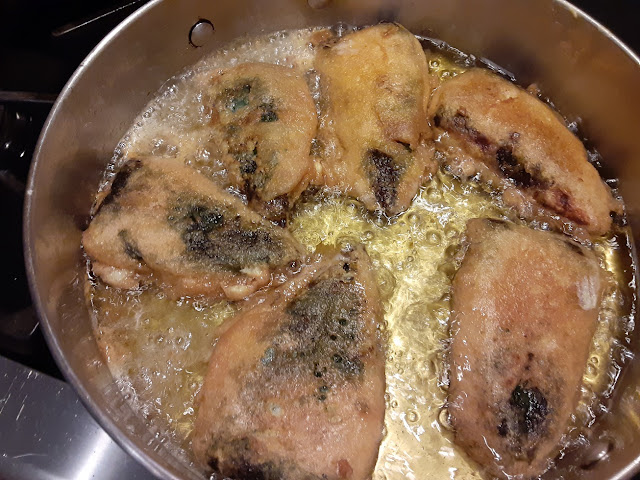 3. Add about 18 ounces of carnitas to another large skillet and fry until crispy edges form.

4. Evenly spread guacamole and carnitas, to taste, on the tortilla. 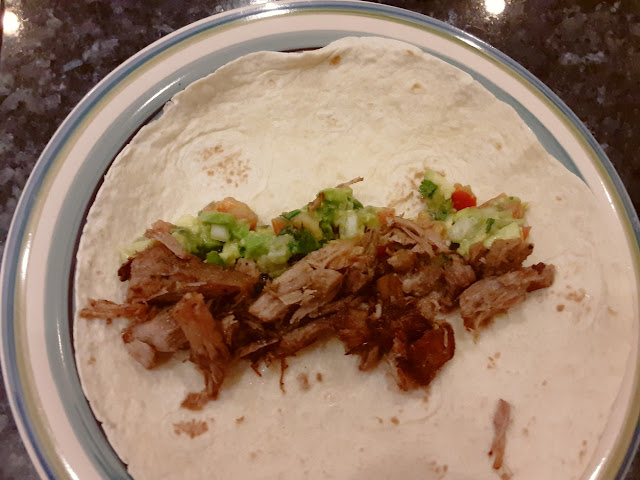 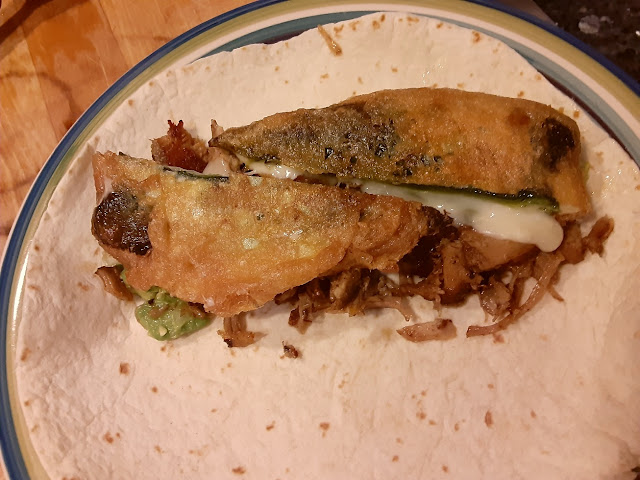 6. Roll up, top with cheese and nuke to melt it then top with pico/salsa as desired. 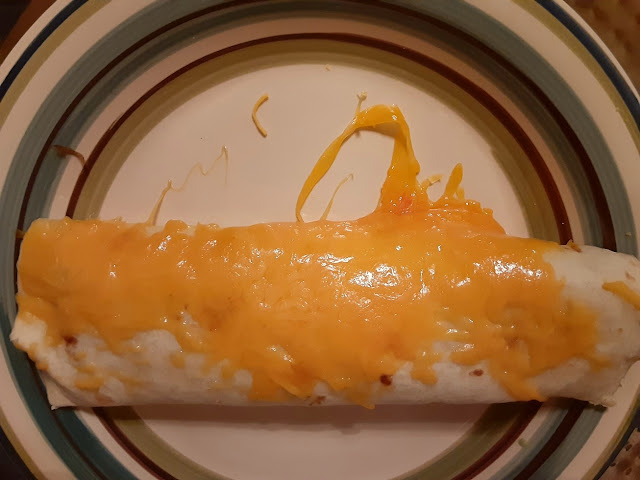 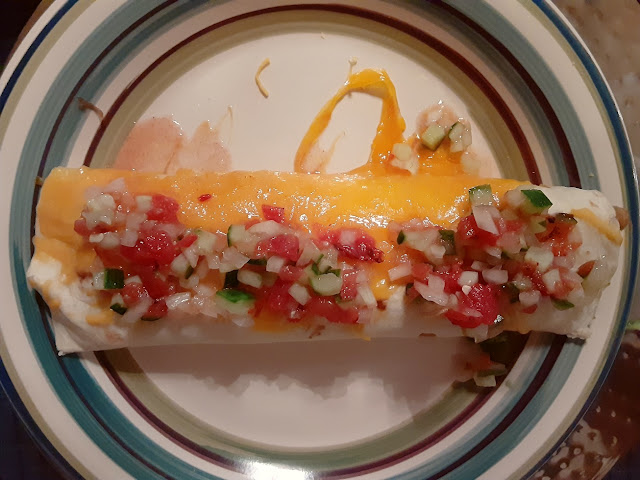 Since we eat our burritos with a fork, we leave them open-ended because I don’t like the big wad of tortilla that occurs when the edges and folded in.  Here is a shot of the inside from Chuy's. 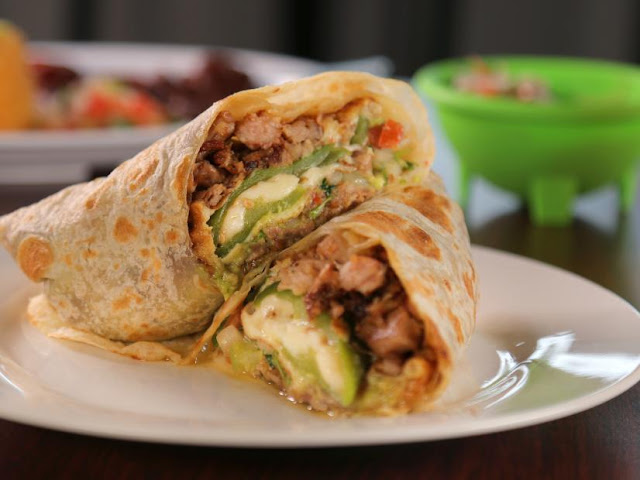 For a side dish, Bev turned the leftover Pinquito Beans into refried beans.

Since they are longer and thinner, Anaheim Chiles would be better for this application but the poblanos were a good alternative.  The meal got good reviews, even from friends Kathy and Russ who eat restaurant Tex-Mex several times a week.  While the Chuy’s version didn’t call for it, I thought the burrito was better with the pop added by the salsa which I added to part of mine

Earlier in the day, we pickled our jalapeno peppers from one plant and ended up with two quarts and a pint 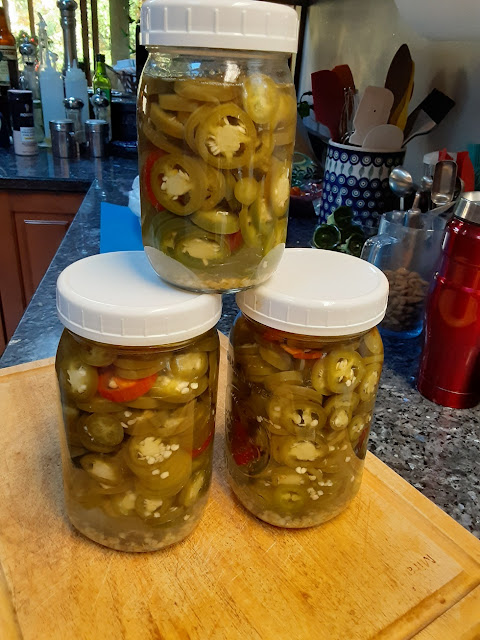 One final comment about the pork from the previous post.  I've been eating the leftover carnitas plain without frying and I believe this may be as good as any Boston butt (excluding smoked) that I've made and it will be my go-go oven version moving forward.