My Smokers Over Time

I’ve mentioned my new Masterbuilt Electric Smoker a couple of times lately and it got me thinking about those I have owned over the years so I decided to post about them.  I decided to get into barbequing after I retired because I could not buy a really good version locally and after eating some excellent BBQ around the country, I knew what I was looking for but I knew nothing about barbequing or what equipment to get.

My first smoker was a cheap offset unit bought from a big box store fired by either wood or charcoal and it looked similar to this one. 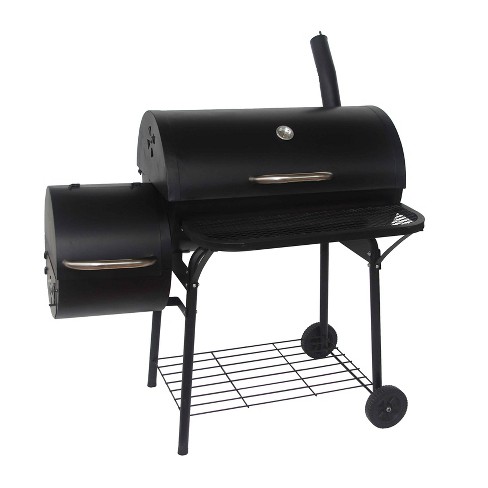 My first few efforts produced meat that was worse than what I could buy and I found that due to the thin steel it was made from, it very difficult to maintain a steady temperature and I soon realized that cooking great BBQ wasn’t quite so simple so I began reading several forums dedicated to the subject.

I decided this low end offset was okay if I wanted to say I cooked BBQ but not right for me if I wanted to cook great BBQ, so my next machine  was a bullet smoker that I bought from either Cabela’s or Bass Pro Shop and it looked similar to this one but it was stainless steel and it could be fired with charcoal or it could be set on a turkey fryer burner which made the box temp much easier to control. 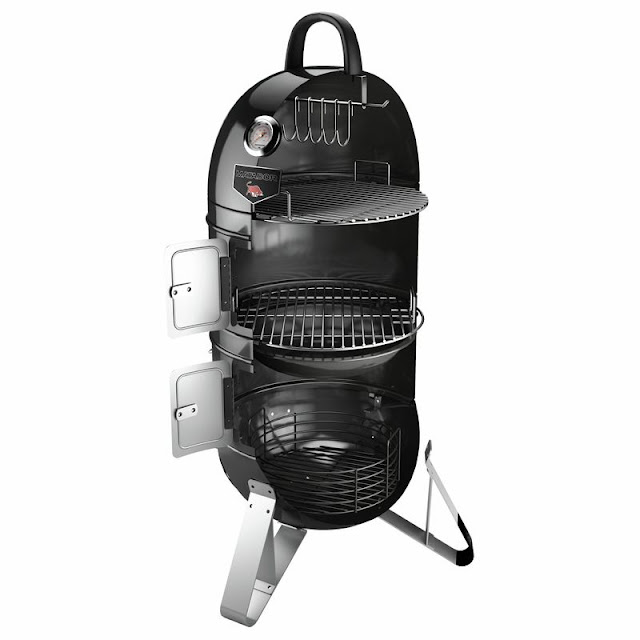 It made some good BBQ but it couldn't hold very much.  My most memorable cook on it was a whole turkey which was the best one I’ve done.  Thanks to the large water pan sitting above the fire containing fruit and herbs in the water, the turkey was delicious and the breast meat was very moist.

As I continued to read the BBQ forums, it became obvious that real men cooking real BBQ used an offset smoker fired with wood so I invested in a high-end heavy gauge steel offset BBQ pit (smoker) made by Dave Klose in Houston, TX and had it shipped to me.  It looked just like the one in this photo. 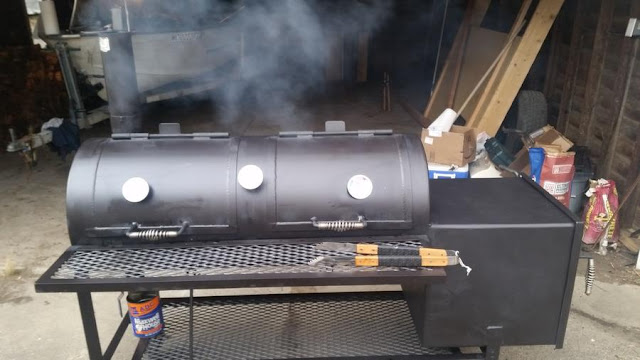 It was at this point, with the help of the forums and TV BBQ shows that I began making some really good BBQ – even brisket which may be the most difficult to get right.  Once I learned how to keep the fire fed and control the air flow maintaining temps was must easier and I could cook a good bit of meat.

However, after a couple of years, I realized that these offset pits were made for guys who wanted to set around, drink beer and play with the fire as it required a lot of attention.  It was then that I discovered Stumps Smokers which are box type smokers, so I ordered a Stumps Classic and we made the one-day round trip to Centerville, GA with a trailer to pick it up.  This is it just before I sold it. 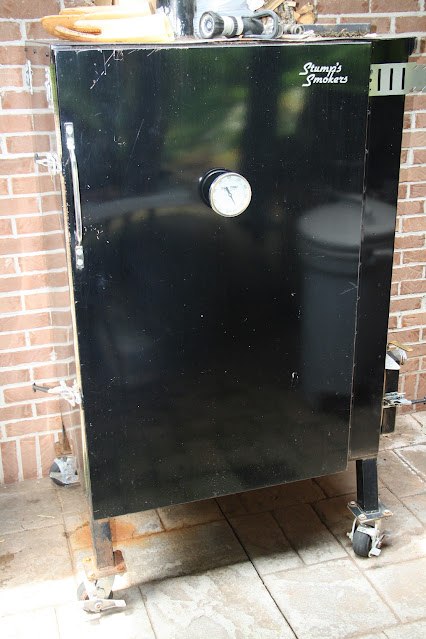 The fire source was a gravity feed chute to which charcoal and wood chunks were added and it would run 10-12 hours without addition of fuel.  With the addition of a DigiQ (thermostat and fan to control air to the fire), it would run overnight and maintain a precise box temperature so I could load the long cook time meats (butt and brisket) right before bed and they would be done about noon the next day.  With the large smoker, I began cooking for friends which expanded into their friends and pretty soon my hobby was a small business.

One 90+ degree summer day, while I sweated over this hot job, I asked myself why I was doing this as it was work rather than fun for me, so that was my last cook and the business was closed.

Since Stumps was too big for just cooking a piece of meat or two, it was rarely used and when I needed a new grill, in June 2017, I bought a Weber with a smoke box in it on the right side. 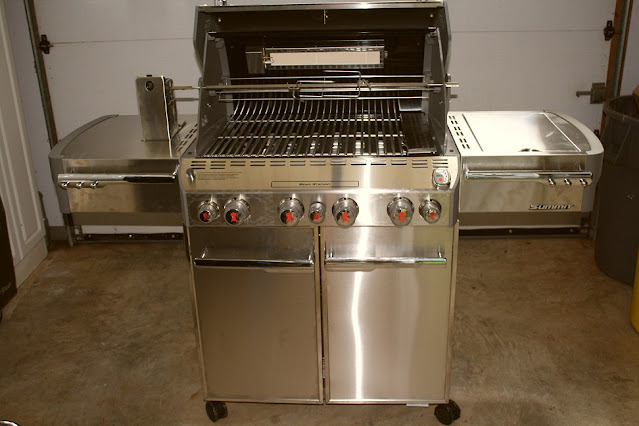 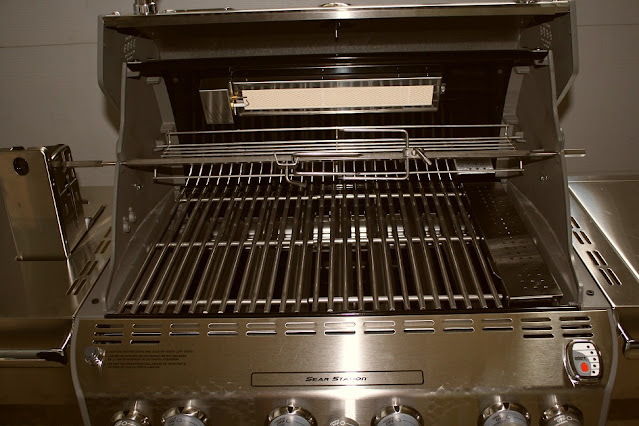 While it worked pretty good for some things and the temp was easy to control, I had trouble getting the BBQ quality I was used too so when we recently attended a BBQ cookout with friends and he cooked the meat on an electric Masterbuilt Smoker, I realized it was what I needed to meet my needs. 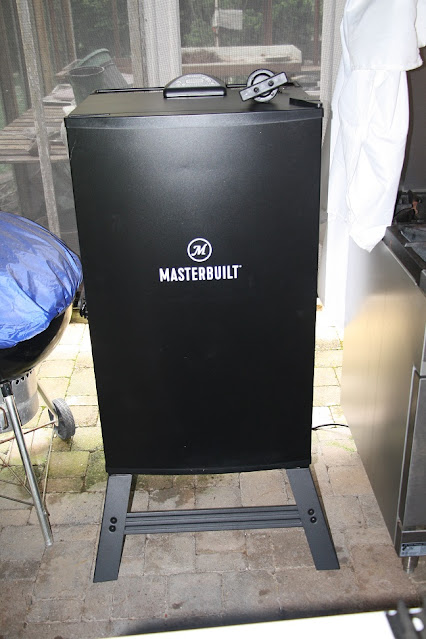 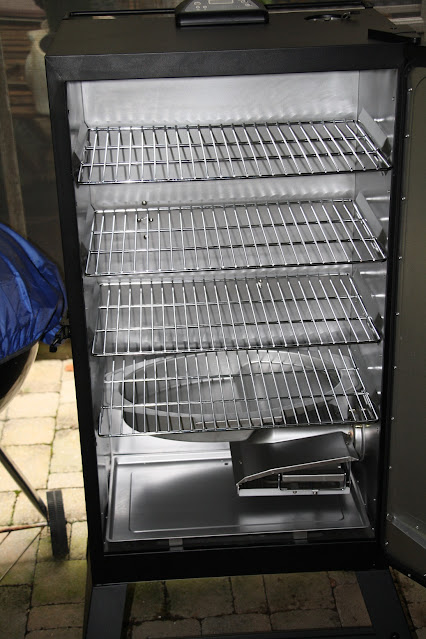 In my early BBQ days, using an electric smoker would have been BBQ blasphemy and I would never have considered it but over the years I realized that great BBQ was a function of the cook and not the cooker and some folks even use 55 gallon steel drums.

I still like the smoke box on the grill so I can get some smoke flavor on grilled foods but the Masterbuilt will be my last smoker unless it goes bad.  This was a fun trip down memory lane for me.

Some time early in this century until now event dates