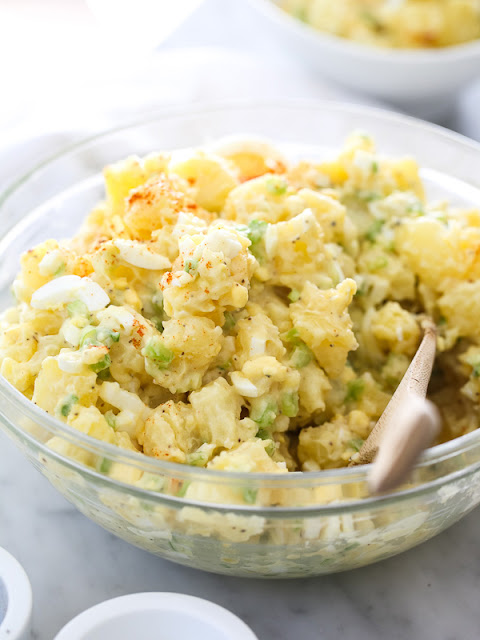 6 medium white potatoes or Yukon golds about 2 1/2 to 3 pounds, skin on and quartered

1. Bring a large pot of cold water to a boil. Reduce the heat to a lightly rolling boil over medium heat. Cook for 20-25 minutes or until the potatoes are easily pierced with a fork or pairing knife. Drain and allow to cool until just able to handle.

2. Peel the skins from the potatoes and cut into 1/2" to 3/4" square pieces. Transfer the warm potatoes to a large mixing bowl and sprinkle with the white vinegar. Toss the potatoes with the vinegar and set the potatoes aside to cool, about 15-20 minutes.

4. In a medium bowl, mix the Miracle Whip or mayonnaise, sour cream, yellow mustard, celery seed and salt and pepper. Fold into the potato mixture and season with more salt and pepper to taste. Slice the last egg into thin slices and place the slices on top of the salad. Sprinkle with paprika if desired. Chill for at least 1 hour or overnight before serving.

She made a very pretty presentation. 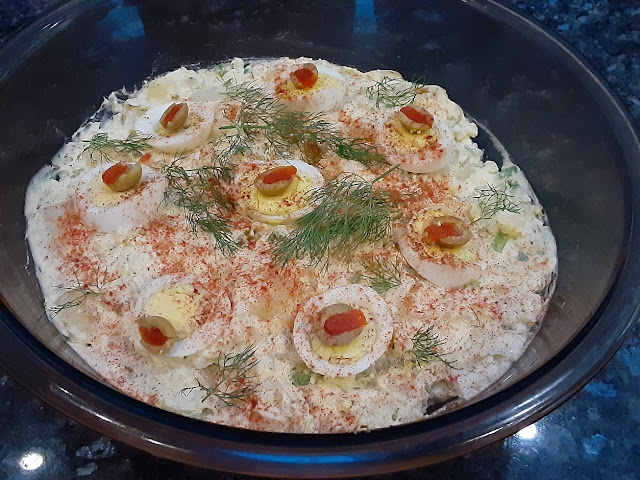 As mom did, Cindy left it out at room temperature until we ate it and I thought it was delicious, as did Bev and Cindy.  I liked it so well that I would have to do a side-by-side taste test to see if it was different from Mom’s version.  I thought the vinegar and sour cream might provide too much tang but that was not the case and I now look forward to a repeat performance making only one suggestion – make a double recipe next time.