On Thursday with the 96F temps, we elected to pass on a trip to the Kentucky Horse Park and opted to drive the 20 miles down to Lexington and try a restaurant that had been featured on Diners, Drive-ins, and Dives and the Rachael Ray Show.  The Parkette Drive-In opened in 1951 and the sign was erected in 1957. 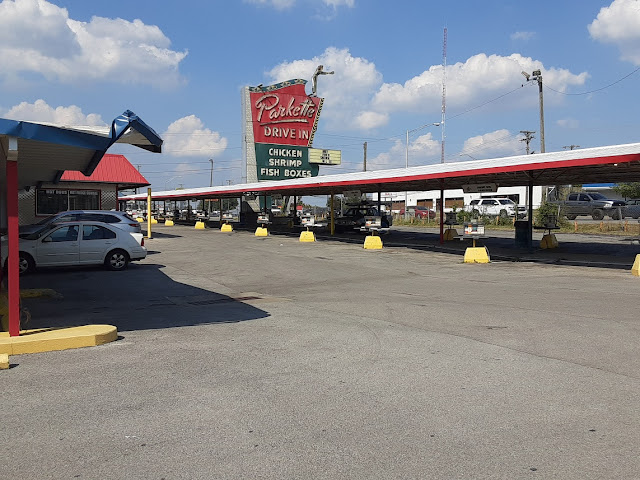 With the hot weather, we decided to forego the drive-in, enter thru the back door, and eat inside in one of the two dining areas which were pretty empty at three in the afternoon. 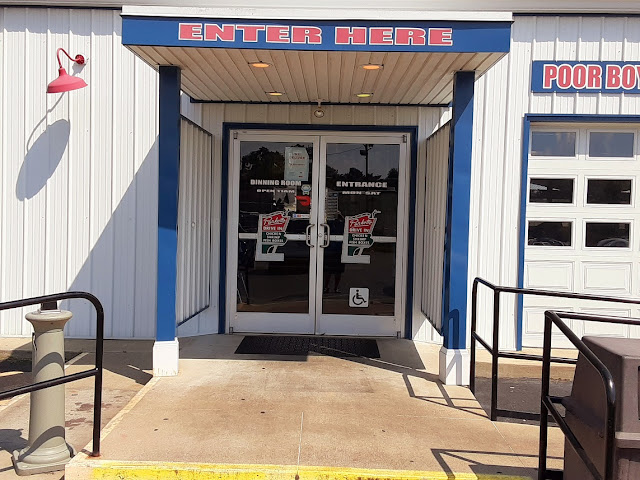 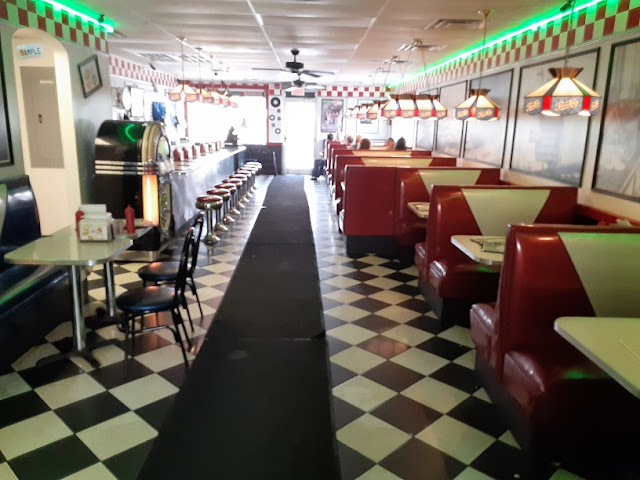 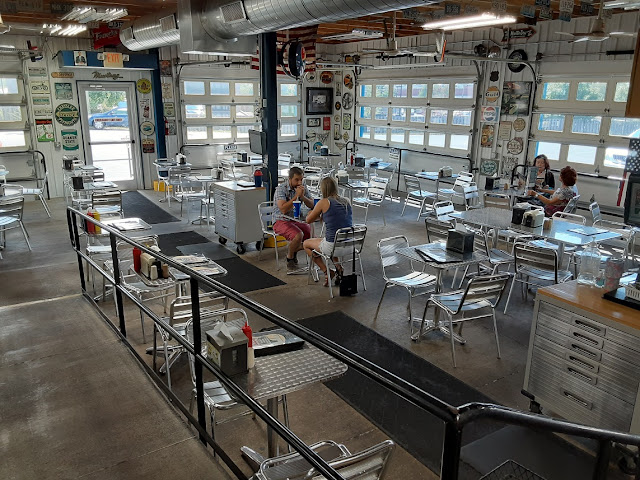 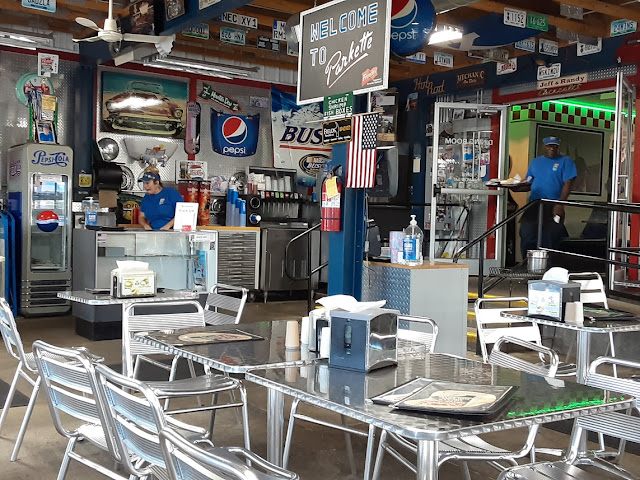 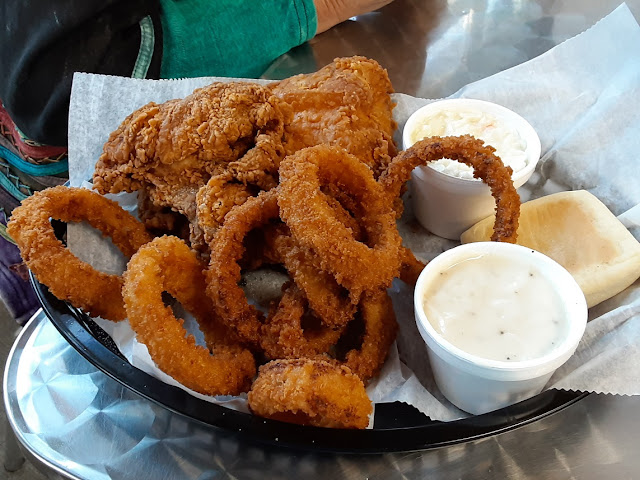 I wanted to try several things so I ordered the Chicken N’ The Sea with onion rings ($16.75) described as “2 Hand-Breaded Chicken Strips, 2 Golden 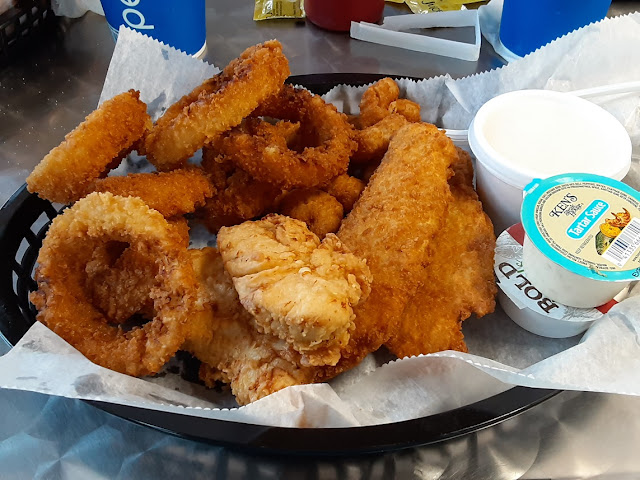 The food had the potential to be very good but it was mediocre at best and about what I expected.  Bev’s chicken and all of the onion rings were just warm when they got to the table and all of the deep fried items were cooked too long making them very crispy (my shrimp were hard) at the sacrifice of much of the flavor.  While Bev’s was hand breaded, I think all of mine came from a frozen bag which didn’t surprise me but I had hoped for better.  The place must be living on its celebrity as I can’t imagine it gets that much return business except maybe the folks who normally eat drive thru fast food – we wouldn’t go back.

While the rally went for another day, we elected to go home Friday so we would have two days to get ready for new flooring on Monday.  Let me first do a wrap-up of Whispering Hills RV Park by saying that everything we utilized worked well and they even had good WiFi but no cable, however the local TV channels came in well from Lexington.  My only negative was the unlevelness of nearly all of their sites but since they are full most of the time, I don’t expect them to do much about that.

We wanted to go to breakfast with the group on Friday morning so we got the coach ready to travel on Thursday evening and early Friday morning.  We drove the car about 10 minutes south for our meal at Cracker Barrel where I always enjoy their breakfast meals and since I also like fish, I had the grilled catfish with grits, hash brown casserole, eggs, biscuits and gravy.  As usual, it was all good but I forgot the pics.  The highlight of the meal was when the group surprised me with their rendition of Happy Birthday, a card signed by everyone, and a Powerball ticket with the stipulation that if I win, I owe them each a new motorhome.

As we drove up and down US-25 during the week, we were fascinated by the unusual looking stone walls and came to learn that they were called slave fences but they were apparently built by Scottish and Irish immigrants or freed slaved who were taught by them. 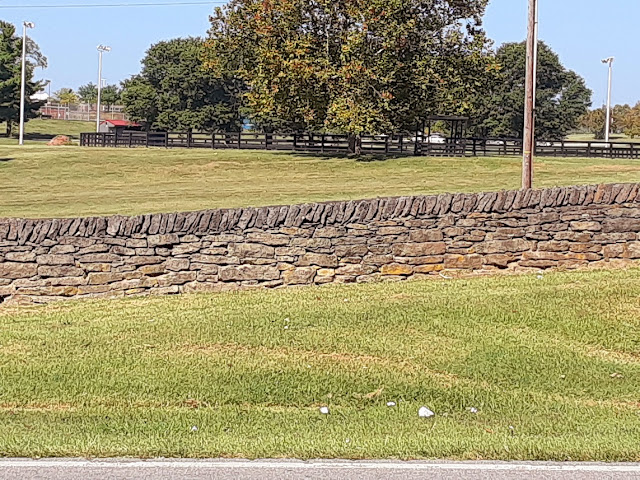 The trip home was uneventful even though the “check engine light” continued to go on and off but after some reading at the campground, I learned how to get the on board system to give me the fault code which I now can give to the mechanic so that was a big plus.  We rolled into Almost Heaven South about 3:15, unloaded a little, and relaxed.


Another successful rally is in the books and we owe a big thank you to our Rally Masters Barb and Marc.


I don’t know what happened with the verbage but I couldn’t seem to fix it.