Do you pay attention to drug ads on TV – us old people generally do and as I watch them, I can’t help but wonder “How do they come up with these names?”  Orillissa, Trelegy, Chantix, Epclusa, Taltz, Xeljanz, Jardiance, Vraylar, Stelara, Zicam, Brilnta, Dupixent, Cosentyx, Neulasta, Glucerna, Emgality  - they like to use X and Z.  Then here are a few of the largest sellers - Harvoni, Mabthera, Avastin, Herceptin, Sovaldi.  And the generic names are even worse.  This is what happens when you sit around the RV with nothing else to do.


On Friday, we had planned to go to Tubac for the arts festival but Teddy Bear has been ailing and we wanted to be sure he was okay plus Pat said she wanted a day off, so we just hung around, did a little cleaning and a small repair.  Since we were home all day, we decided we could cook supper and we had some potatoes that we wanted to scallop and fried shrimp is always a hit.  For the shrimp I used this recipe:

Mix everything together and let stand about 20 minutes, dip shrimp and let excess drain.  Deep fry for a minute or two – my girls like theirs to be well done.

Note: I only needed a half recipe of batter.

Bev used the following recipe for the potatoes:

Directions:
1. Melt butter in large sauce pan over low heat; blend in flour, salt, and pepper.
2. Cook, stirring constantly, for about 1 minute. Remove from heat gradually stir in milk.
3. Return to heat; cook until thickened and bubbly.
4. Fold in ham, onion, green pepper and 1 cup cheese. Pour over potatoes in a large bowl.
5. Stir gently then move into a buttered 13X9-inch baking dish; cover with foil.
6. Bake at 350 degrees for 30 minutes.
7. Uncover and continue to bake for ½ hour.  Add the remaining ½ cup cheese and bake for another 30 minutes.
8. Let stand for 10 minutes before serving. 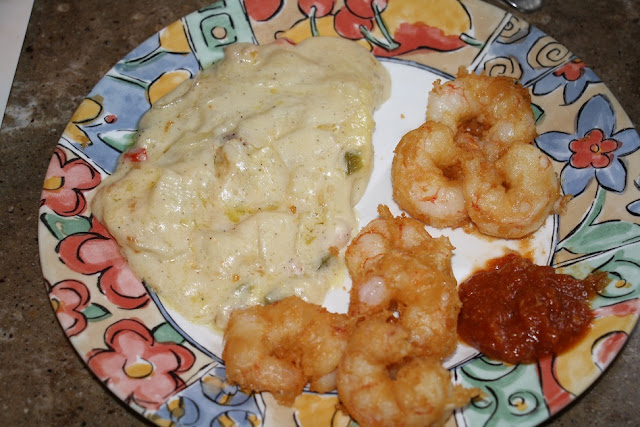 It was a good meal and the potatoes had a lot of sauce, which I liked but some may want to cut back on it.

Later, Bev and I went next door to sit by the fire with a couple of our neighbors.

On Saturday, the girls decided to do a little shopping in the old part of Tucson on 4th Ave then we went to the nearby El Charo Café for an early supper.  The restaurant looks very good from the outside and inside as well. 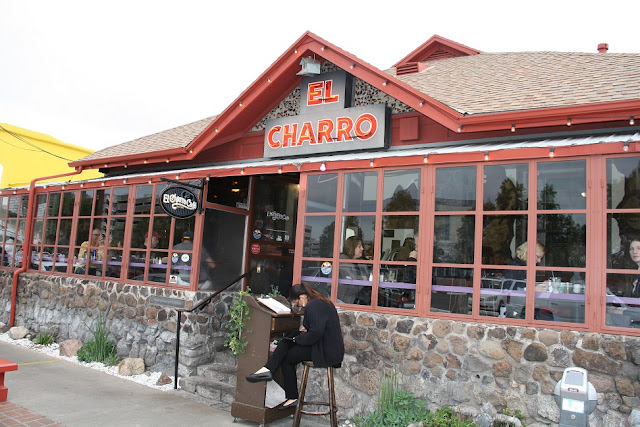 We began with a pitcher of Margaritas which the girls said they preferred to mine – not so for me but still a dagger to my ego.

I’ve decided to keep trying things I don’t usually order at a restaurant so for this meal I ordered Carlotta’s Clásico Chicken Mole - "A classic presentation of our chef’s chicken mole recipe using all-natural grilled chicken breast. Featuring arroz blanco & frijoles charros" ($16.95) but what I got was the Pollo y Mole Clásico ($14.95) - "Grilled chicken enchiladas in our mole clásico con chocolate." Since I really just wanted to try the mole and it was my second choice anyway, I decided to keep it. 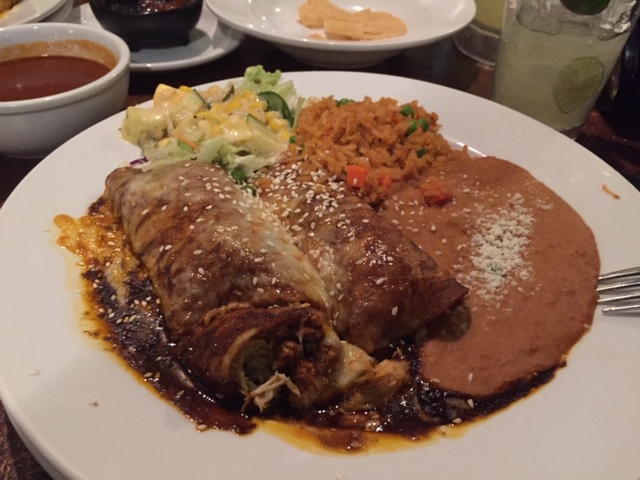 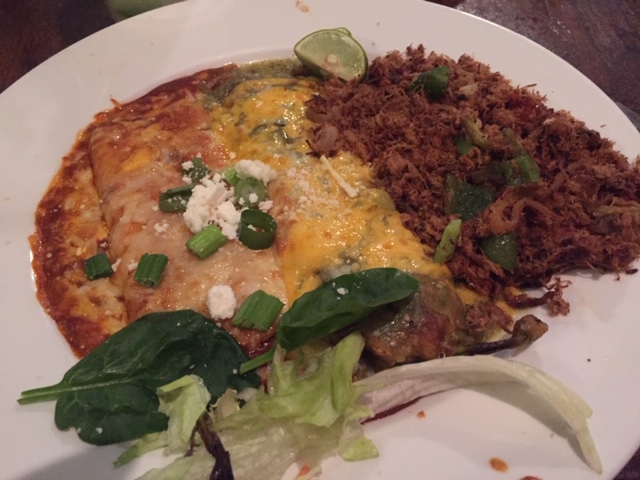 Pat had the Chicken Chimichanga which was the deep fried version of "Pollo Arizona-slow-cooked 100% natural shredded chicken ($14.20)." 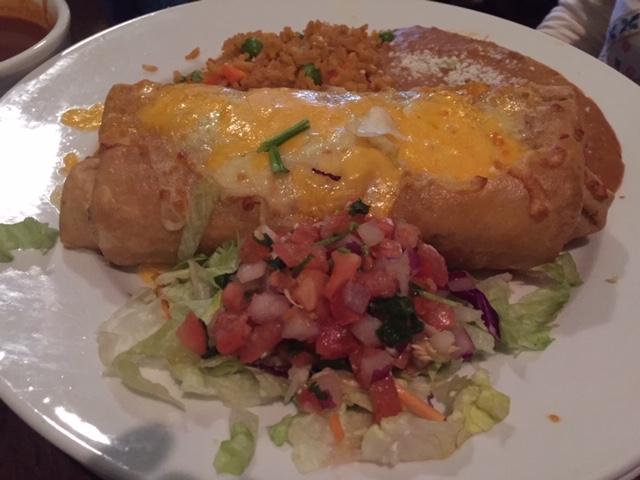 The plates were all looked very well presented but once again the girls said their meals were good but not great and I ate Pat' s leftovers and the chicken was pretty bland.  I thought mine was good and I'm confident this was very good mole, but I now know I prefer red or green sauce to it – hard for a choc-o-holic to admit.

While the food was good, our poor server seemed to be having a rough day.  She began by initially serving our meals to the table beside us to which our she said the guy who brought the food to the wrong table was new. Then I got the wrong meal to which the server said she had written down what she brought me – I guess she didn’t realize she wrote it wrong and the girls confirmed what I ordered – no big deal but very little tip for her.

I keep waiting to get some blow-me-away Mexican food but so far that has not happened and I think I know why.  Our primary, at-home Mexican restaurant is in No-Where (Vonore) TN and so far we like their food as well as any we’ve had in San Antonio or Tucson so we will now appreciate our Cielito Lindo much more as it seems that have been serving us pretty darn good food.

The highlight to the evening was when we departed the restaurant and a dressed-to-the-nines older couple was standing at the open door of a very stretch limo.  I asked if they had room for three more and said we would bring our own drinks to which they replied “we’d rather have you than who we are about to get.”  So funny.  All-in-all a good experience for the afternoon.