While Cindy was here for three days between her trips (now in FL with Bev), we had fish every night and I had it another night so I got my fix and then I ate the last of my casseroles so I was ready to move on to something else and pasta is always a favorite.  So after a night of chili, I went freezer and came up with a package of sweet Italian sausage from our favorite Wurst Kitchen and since I like the idea of casseroles to eat on for several meals I went in search of baked pasta dishes and found several that were pretty simple so I used them as a guide and made up my own.

Directions:
1. Slow cook the sausage in a skillet with a lid, browning on all sides, if possible, until cooked through then remove, cool some and slice into ½” thick rounds. 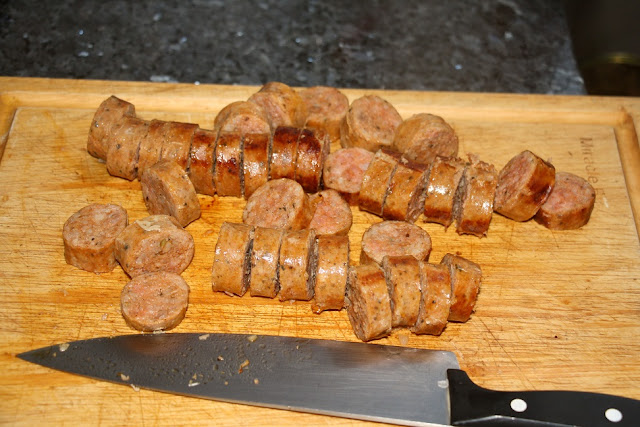 2. Start the pasta and cook until just al dente
3. Add the veggies to the sausage pan and sauté until most of the liquid is released,
4. Drain the pasta and return to the pot, add 2/3 of the Parmesan, and the sauce and stir until well combined then mix in the sausage.
5. Add the mixture to a 10"x12” greased casserole dish, cover with foil and bake at 350F for 45 minutes.  I cover mine because I don’t like the dried out pasta ends that results from baking uncovered. 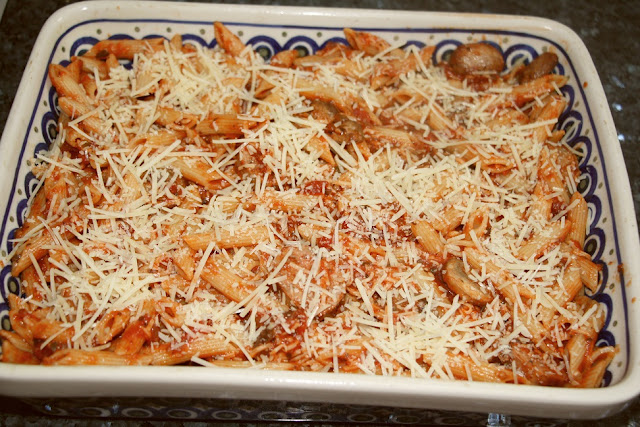 6. Remove foil, top with provolone and bake another 10 minutes or until cheese is melted. 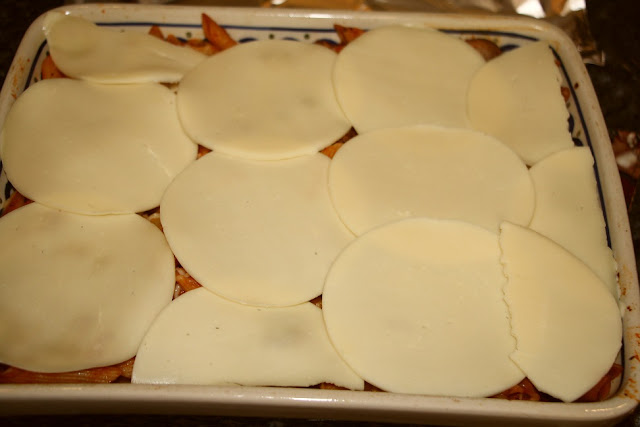 7. Remove from oven and serve immediately. 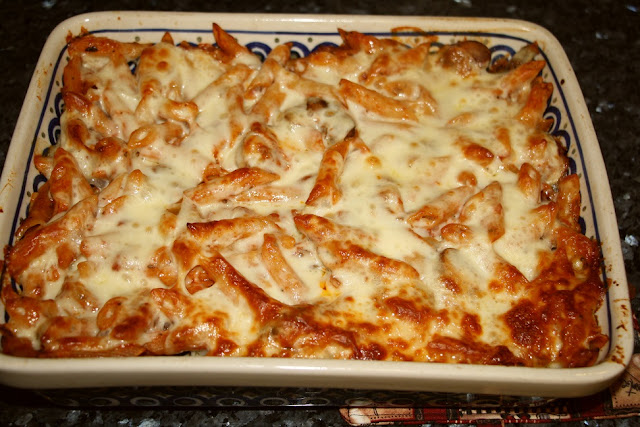 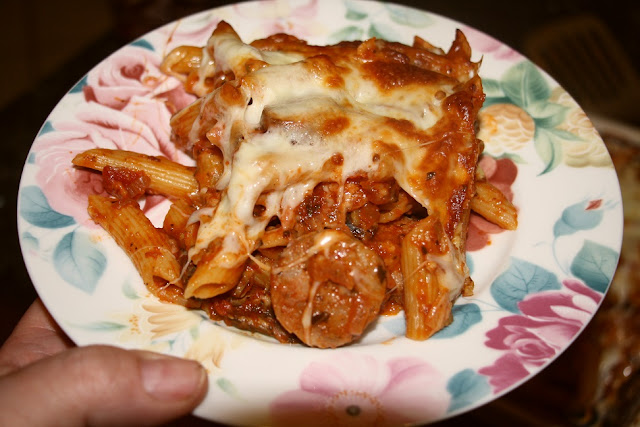 I thought it was very good but it would have been outstanding with about 1/3 more sauce, a better sauce (such as Rao’s Homemade Marinara), and about twice the garlic (can’t get too much garlic).  Some sauteed sweet pepper would likely have been a good addition but I forgot we had them in the freezer  - hey I’m an old guy.

I don’t know about you, but every now in than I like a good rant (even yours) and while most of you couldn’t care less about my opinions, it just makes me feel better to do it.  Awhile back, my buddy Chef Lea Ann at Cooking On The Ranch must have had the same issue as she did alittle rant on the difference between a burrito and an enchilada – it’s the type of tortilla used and I have a little rant myself but first, I continue to be surprised at how certain foods become big fads as it wasn’t long ago that fatty food was taboo and things like bacon were to be avoided.  But lately on the food shows we watch, fried pork belly (bacon is cured pork belly) seems to be the in-thing these days.

Another item that seems to be popular lately is Red Eye Gravy which is basically made by adding strong liquid coffee to a pan in which country ham has been fried with maybe another ingredient or two (butter & broth) and that’s all there is to it.  I hate to be the food police but sometimes it gets so ridiculous that I can’t help myself such as this case I saw on DDD where the cook was serving red eye gravy over biscuits which is very much a right thing to do.

The problem is his gravy was made with plenty of bacon, diced, roasted prime rib, ground pork, spices, ground coffee (not liquid), condensed milk, pork broth, chicken broth, garlic, honey, cream, and roux.  As you can imagine, it was a creamy meat gravy and nowhere close to real red eye gravy and while I can imagine it was delicious, adding a coffee flavor to gravy does not make it red eye gravy anymore than calling a drink a martini is correct just because it is served in a martini glass.  It won’t be long before words don’t mean what we think and miscommunication will run rampant – more than it already does.  So if you ever come to my house and asked for red-eye gravy you can expect country ham fat flavored coffee. J