Back in 1980, Goldie Hawn and Chevy Chase made a really cute movie named “Seems Like Old Times” and one of the things that got played up in the movie was a dish called Chicken Pepperoni.  I’m not sure it even existed prior to the movie but there are now several recipes for it and we’ve made one of them previously.

We decided we’d like to make it again and I found a write up about the movie that included a recipe for the dish on Kelly's "Wildflour's Cottage Kitchen" blog, so we decided to give it a try – be sure to click on the link for a background of the dish, the original recipe, and some great shots.  Here is one of Kelly’s pics showing the single recipe. 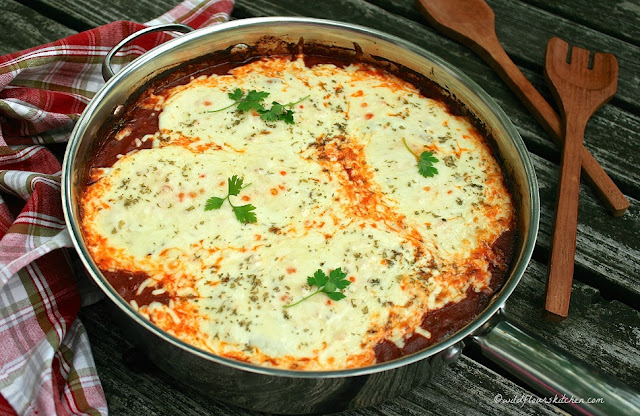 I wanted to have leftovers so I doubled the recipe to get the following:

Instructions:
1. Trim the chicken pieces and pound to about ½” thickness (I used a Jaccard) then salt and pepper to taste. 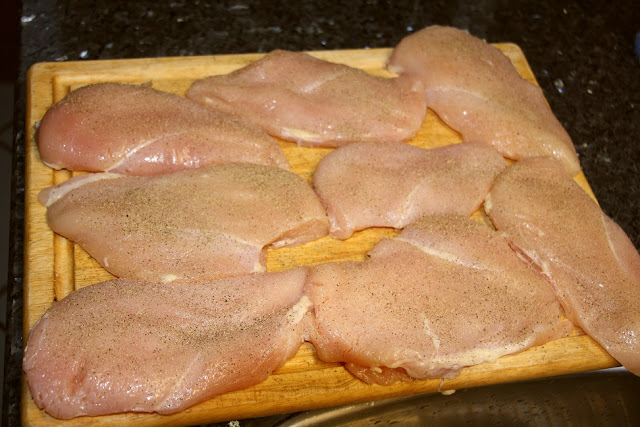 2. In a large deep pan (I used a 12” sauté pan), heat butter and oil over medium-high heat, stir to mix. When hot, sear chicken breasts until lightly browned on each side. 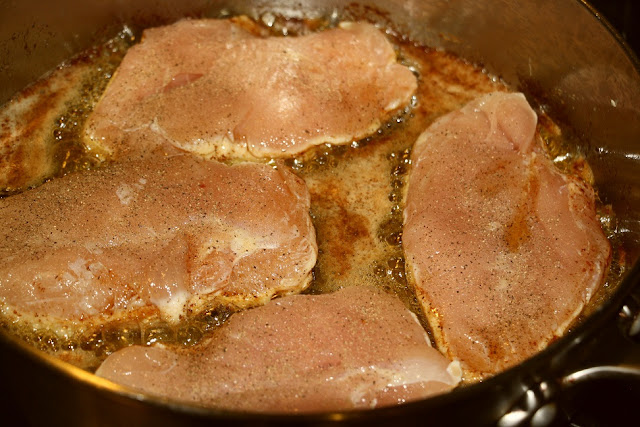 I did this in two batches as not to overcrowd the pan. Remove to a plate or baking dish, cover, set aside. (I put mine in the larger pan for baking). 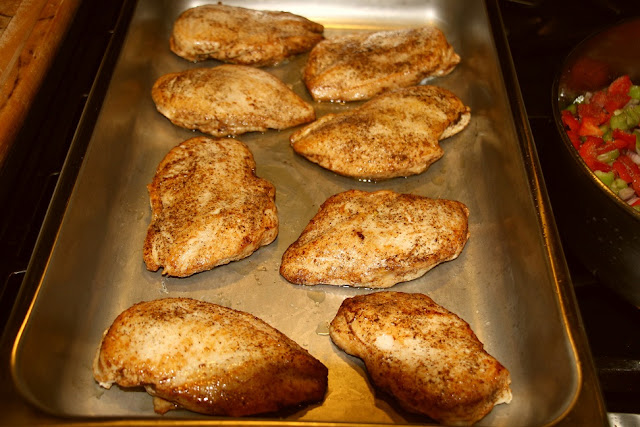 3. Remove pan from heat (do not drain oil and butter), add wine carefully, let steam subside and stir and scrape bottom of pan.
4. Return pan to heat and lower to medium, add onion, peppers, seasonings (except parsley), S&P, and sauté for 10 minutes adding pepperoni after 8 minutes, stirring occasionally.
5. Preheat oven to 350ºF.
6. Add all tomatoes, breaking up whole tomatoes with your hand as you add them (Note 1), stir well, bring to a low boil, reduce heat to a simmer, and simmer for 20 minutes, stirring as needed, occasionally, making sure there's no sticking on the bottom of the pan.
7. Add the cooked chicken to the larger pan and pour the sauce over it.  I lifted the chicken pieces a little so I would know where to put the cheese. Pop into fully heated 350ºF oven and bake, uncovered for 30 minutes. 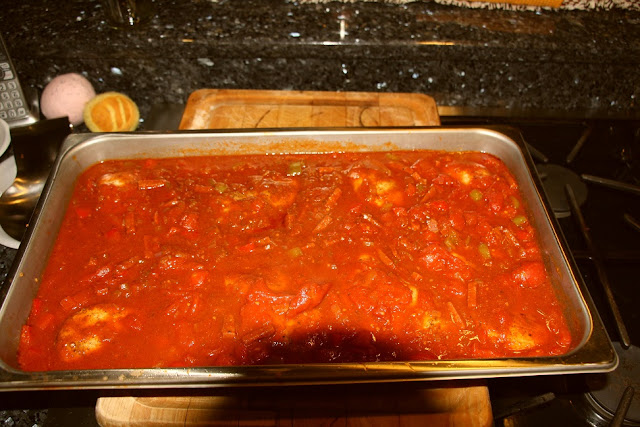 8. Remove from oven and turn on broil.
9. Top each piece of chicken with large handfuls of cheese using all of it. Sprinkle top with dried parsley, and pop back into oven and broil until cheese has fully melted - about 5 minutes, but watch it carefully. 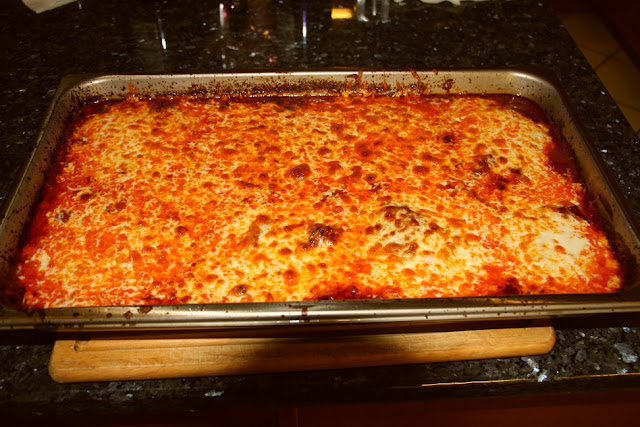 Note 1:  As I broke up the tomatoes in my hand, the juice shot out everywhere, so next time, I’ll give them a few pulses in the food processor.
Note 2:  I didn’t have any dried chiles so for more heat I would use Chimayo Chile Powder but left it out due to the eaters.  The dish had just a little heat and could have used more for me.

We served it with angel hair pasta and we all thought it was delicious and a definite keeper recipe. 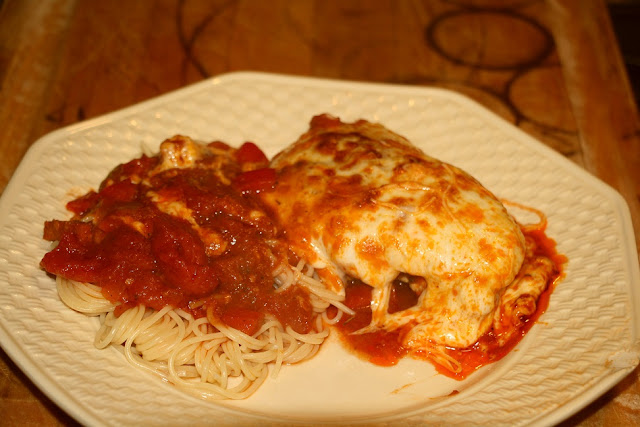 For the leftovers, I froze the individual chicken pieces on a sheet pan with the extra sauce on top and individual pasta servings topped with sauce & cheese on another sheet pan then added each to a quart freezer bag for freezer storage.  Looking forward to how they turn out - never froze pasta like this before. 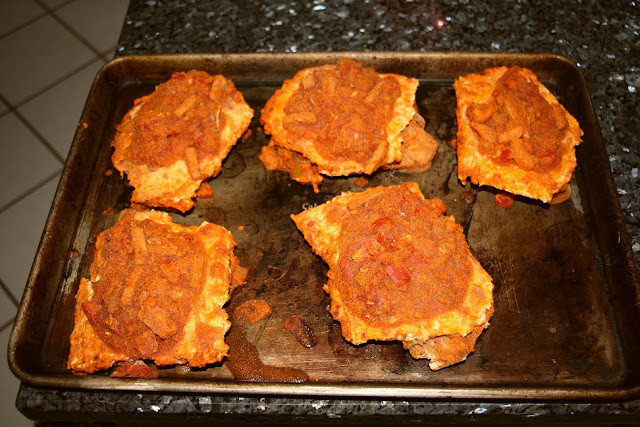 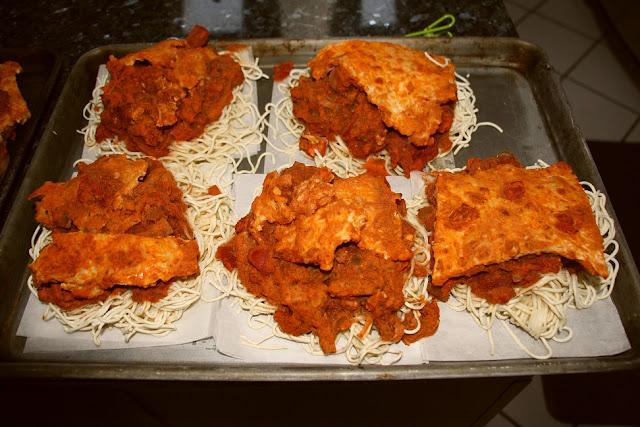