When we travel out west, Bev’s favorite thing to eat is green chili on just about anything – usually a breakfast burrito.  After a lot of looking at recipes I think I understand the difference between Salsa Verde and Chili Verde with the former being made mostly from tomatillos with a couple of hot chiles and frequently used as a dip.  The later includes pork chunks, and about equal parts mild green chiles and tomatillos and like most chili, it’s eaten with a spoon.  You experts feel free to correct me here.

While we were in Denver on our recent trip, fellow blogger Heather (Rocky MountainCooking) gave us several quart bags of roasted Hatch green chiles and we decided to turn some of them into a green chile sauce.

What we were looking to make was more of chili verde but to be used as a sauce (like we get in western restaurants) without the big chunks of meat so after reading many recipes, I decided to just amend Lea Ann’s (Cooking On The Ranch) recipe which we had made and loved.

The biggest changes to her recipe were I used only 1½ pounds of shredded smoked pork, substituted 16 oz of tomatillos for the red tomatoes, and changed the spice amounts a little.

Chili Verde – Adapted from Cooking On The Ranch

Instructions:
1.If you don’t have roasted chiles this will be the first step – see link here for the grill - can also use the oven broiler.
2.Cut the tomatillos in half and place under the broiled until they get charred on top – ours took about 12 minutes based on the distance from the oven element – can also be done on the grill. 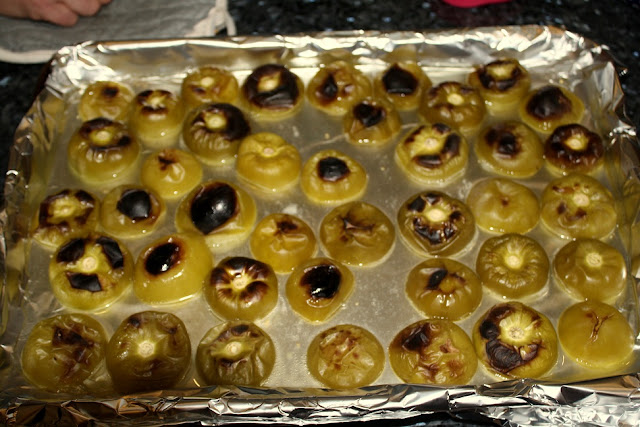 3. Heat the oil and the bacon drippings in a large pot, add the onion and cook until soft, about 10 minutes . Add the garlic and cook until fragrant.
4. Add everything else but the water and cornstarch, bring to a boil and then simmer on low for 2 hours.
5. In a bowl combine water and cornstarch and stir until combined and towards the end of cooking, add this to thicken the sauce.
6. Adjust seasonings as needed.

Note – Lea Ann's recipe calls for 1T salt but since our pork had a lot of spices on it, we began with 1 tsp. then added more to taste.

It turned out perfect for what we wanted and we both liked the tang that the tomatillos brought to the party.  Our friend Karen works with the local Hispanic ministry and eats lots of real Mexican food, sampled and said it was very good.

For supper, we slow cooked a beef roast and shredded the meat, then Bev added a few goodies and made a burrito topped with the chili and it was delicious. 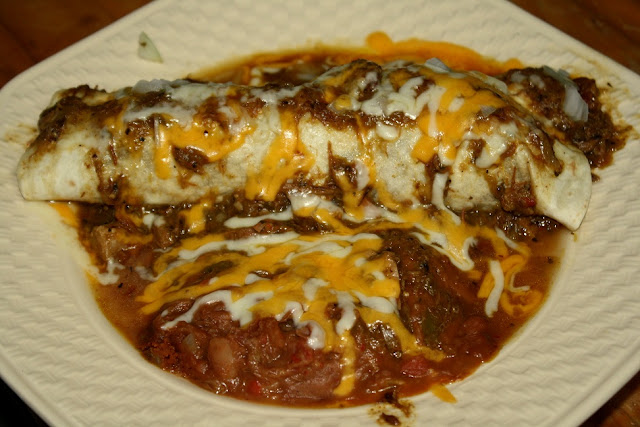 We made a double recipe of the above recipe and ended up with around three quarts of the sauce.