If I read the maps correctly, Cedar Key is the only real development along the west coast of Florida between Hudson and around the bend that begins the panhandle.  I assumed it was because it was protected land but after a closer look, it appears to be the lack of beaches.  Nearly all of the beaches north of Naples are on the barrier keys that line the coast ending at Tarpon Springs.

We went to Cedar key a couple of times and I’ll save that for a later post.  On this day, we went north of Cedar Key with the first stop being Shell Mound.  As we started up the trail, we ask an oncoming group how far it was to the shell mound and they chuckled and said we were on it.  As it turns out, the mound is 28 ft. tall, and covers five acres, and is the accumulation of 6000 years of shells and other bones. 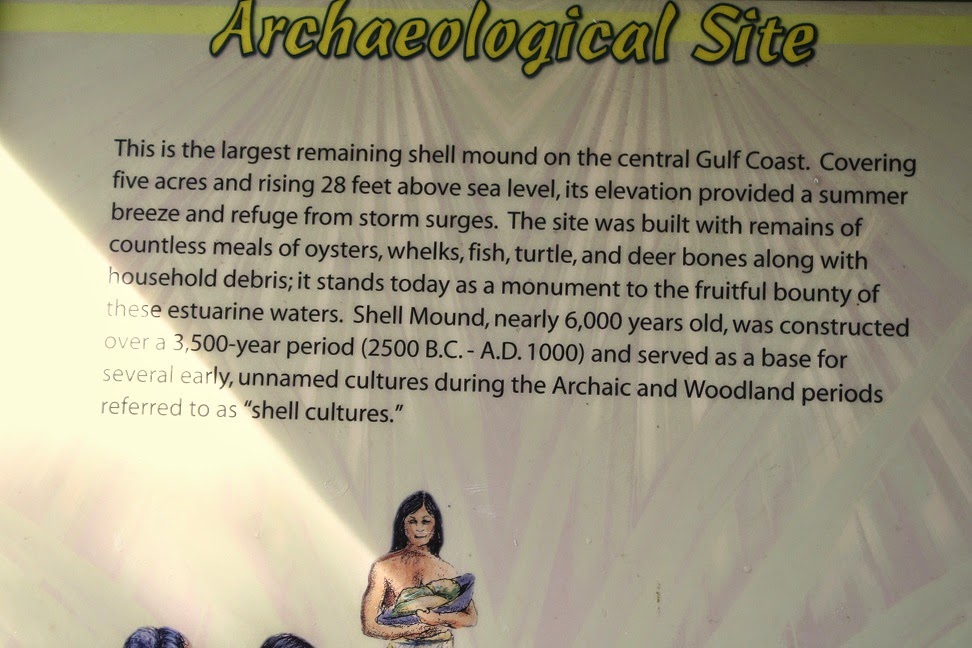 We were expecting to find a big pile of shells but not what appeared to be just a hill covered with plant life, but plants that like high calcium levels.  These are shots up and down part of the trail. 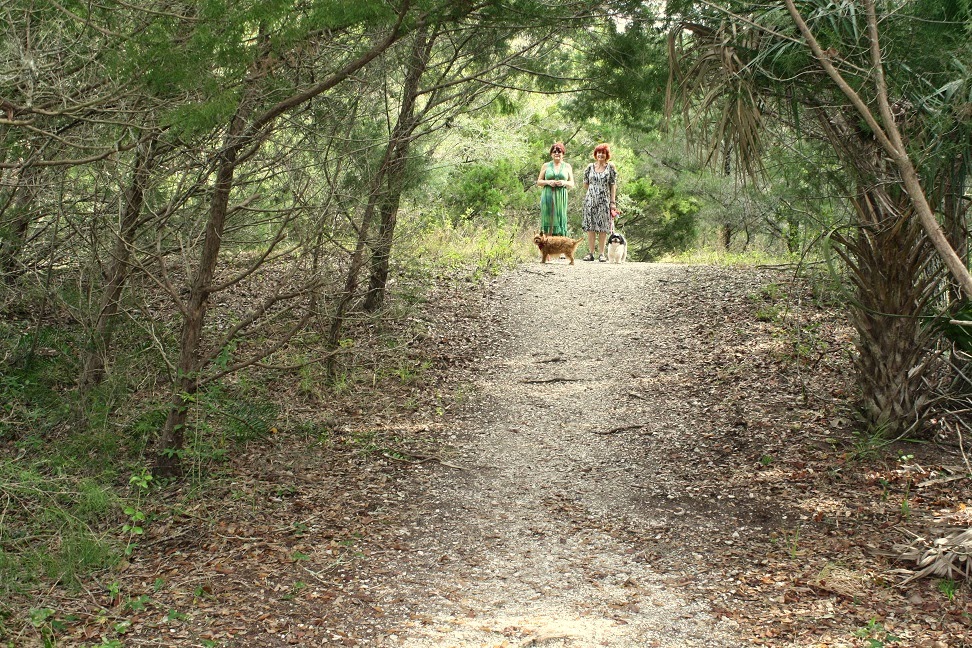 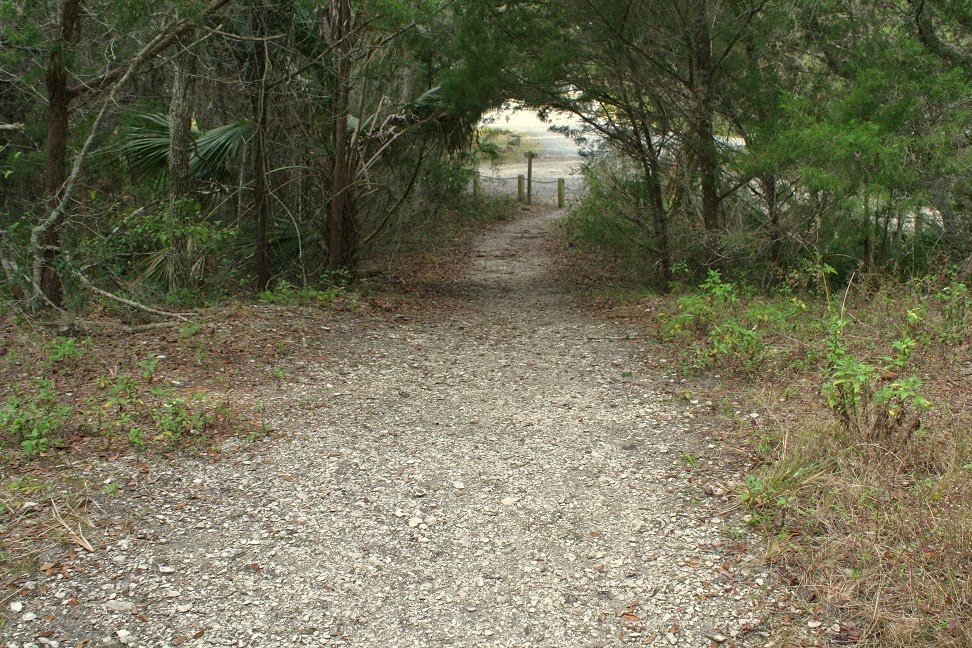 These are from the mound top looking out on the water and down the slope of the mound. 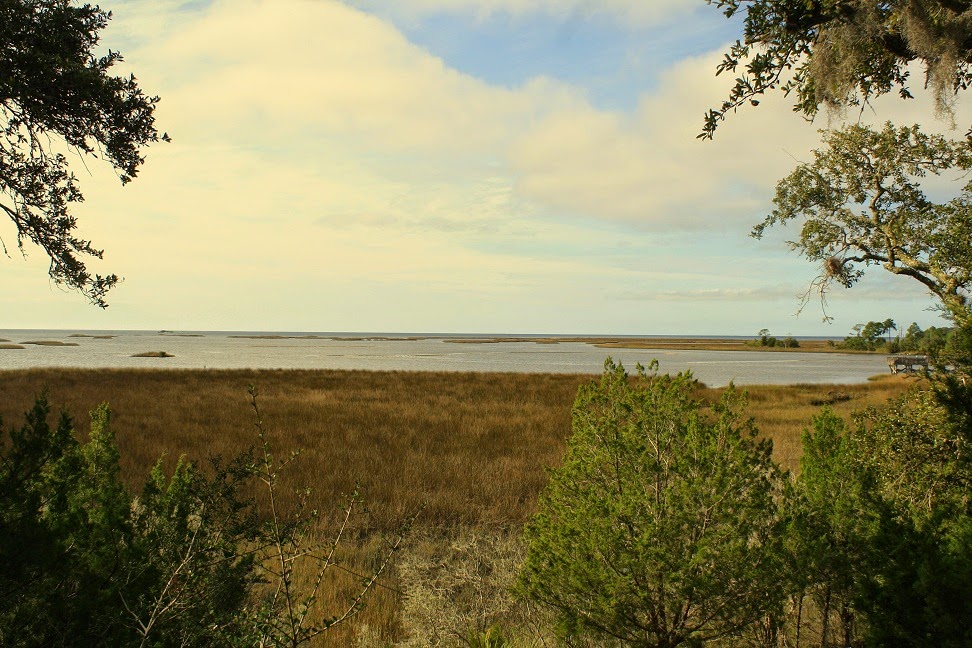 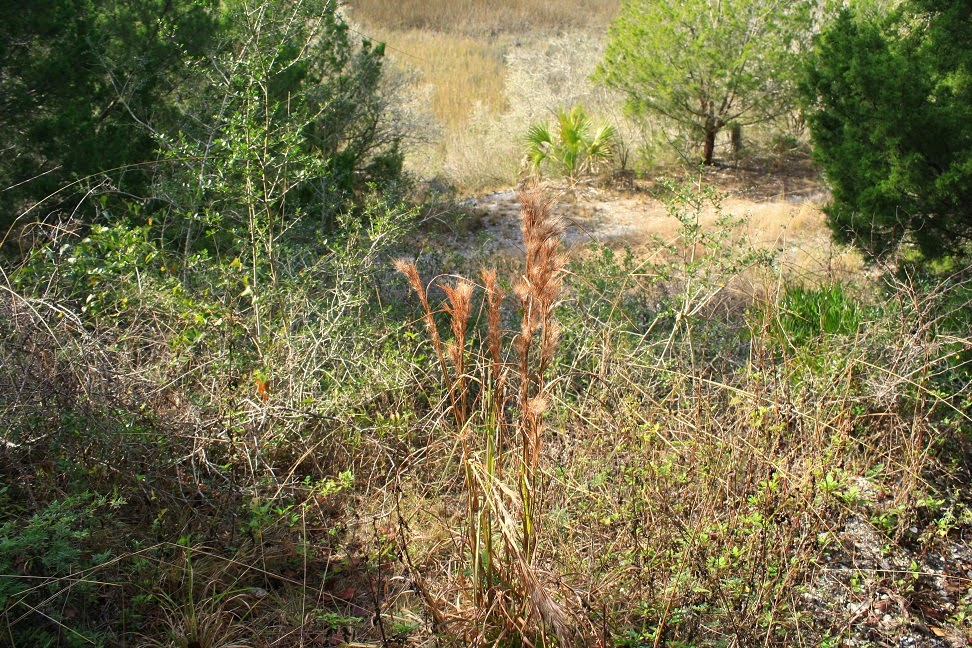 This shot is along the road where the soil has eroded, clearly exposing the shells. 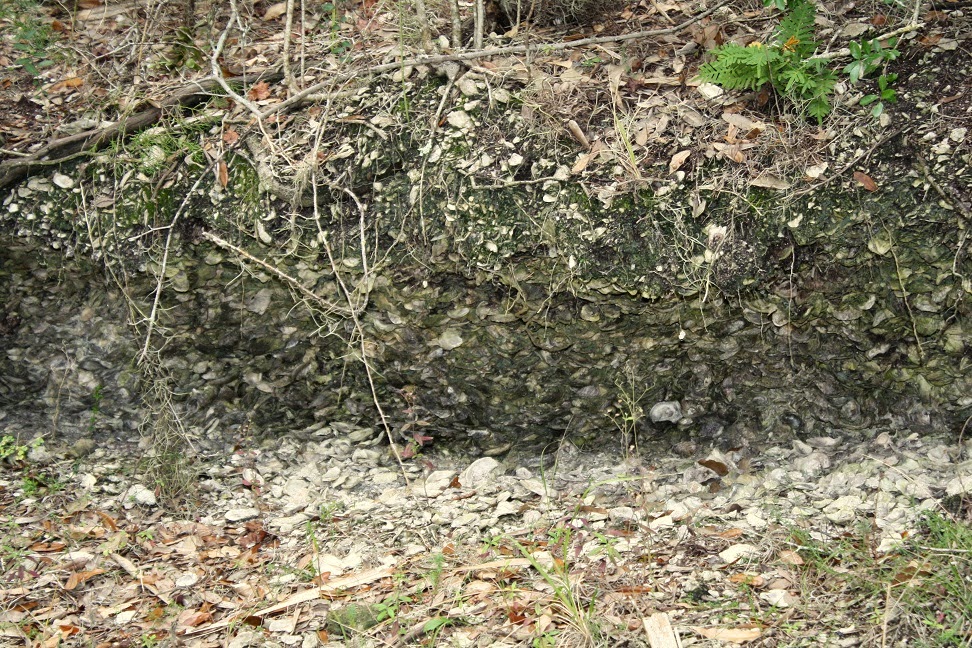 It's hard to get a real perspective of the mound due to the plant growth, but just imagine the amount of shells required to build a 28' high hill covering five acres - my granddaughter would say it took a ginormous number.

From there we drove the Lower Suwannee Nature Drive but saw only one bird the entire trip.  After that, we stopped for lunch at a seafood dive named Treasure Camp on The Suwannee, where we dined on fried seafood.  I thought it had a great location alongside the river with the dining area open on three sides  - here are shots of the outside, the dining area, and out at the river. 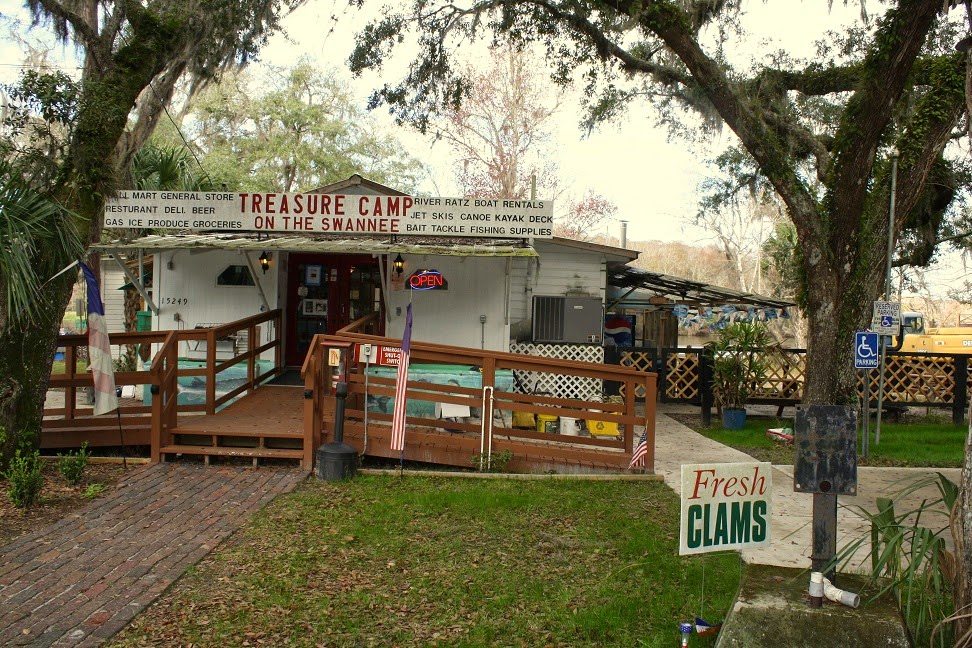 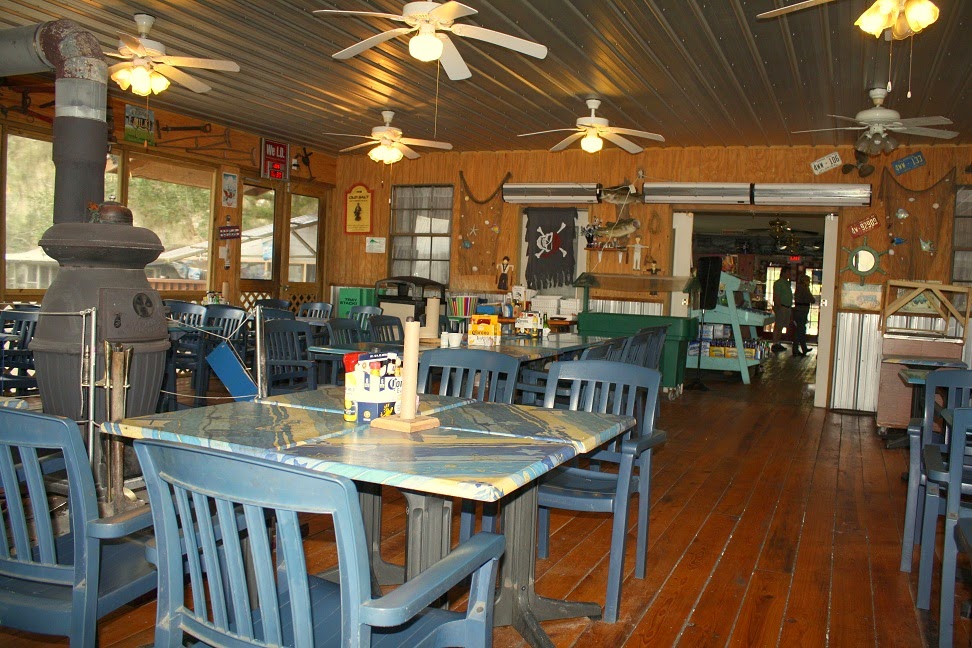 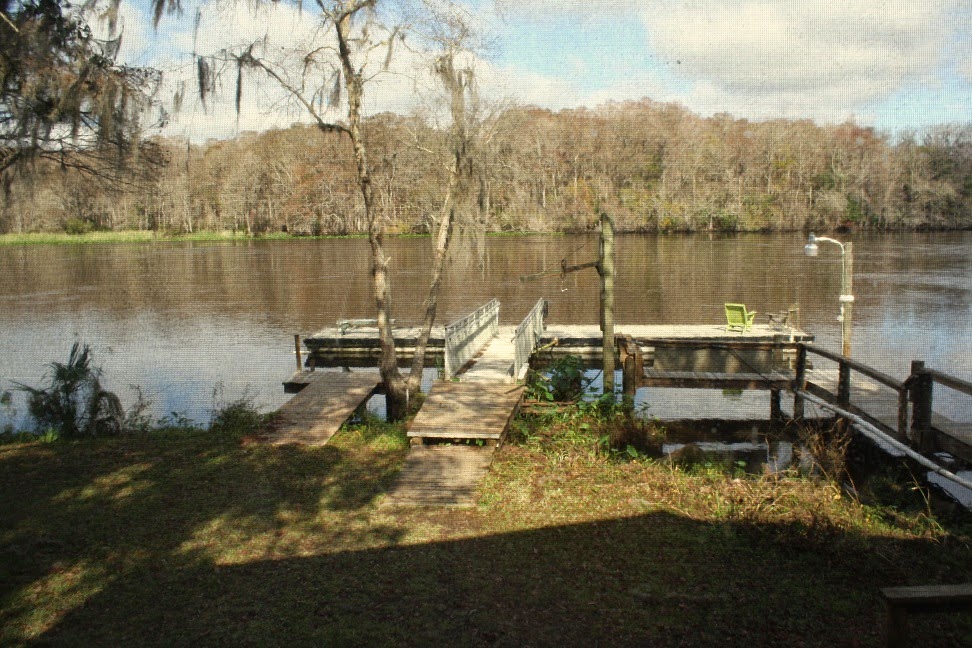 I forgot to get shots of the food, which was good, but not impressive and we were pretty sure that little of it was made there but purchased already breaded.  We would eat there again but not make a special effort to do so.

From there, it was off to check out the town of Chiefland and make a grocery stop.  On the way home we stopped at Robinson’s Seafood Market  for a half sack of fresh oysters and 100 little neck clams to cook up for New Years. 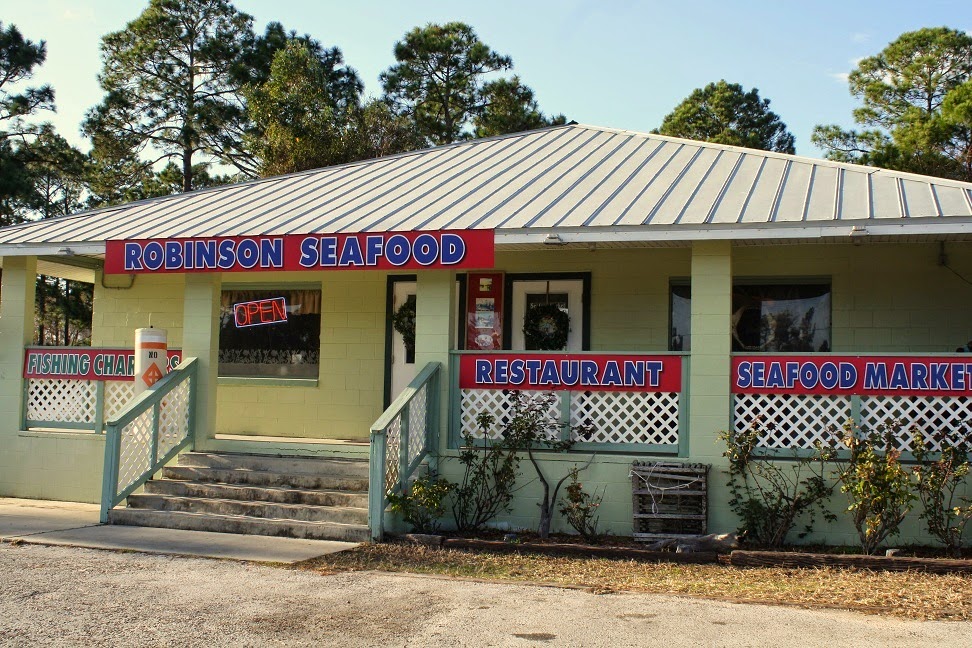 The fresh fish side on Robinson’s is run by a fourth generation area fisherman who catches most of what he sells.  When I tried the clams and oysters raw, they were very salty and I was advised that this was because they were so fresh - sounds good to me.

A very good day spent relaxing in the 30 degree-warmer-than-at-home temperatures.