As I said on my St. Patrick’s Day post, it’s the things we make with the leftover corned beef that we really like and for supper on Monday, it was an almost-a-Reuban sandwich.  A Reuben is made from corned beef, Swiss cheese, kraut, and Russian dressing on rye bread and grilled but we had no Swiss cheese and opted for pepper jack instead and we used 1000 Island dressing, which is a normal substitution.

The ingredients for our sandwich were:

We’re not big fans of the NY deli versions that pile a half pound of meat in the middle of the bread so it looks impressive when cut in half (photo from the Net), 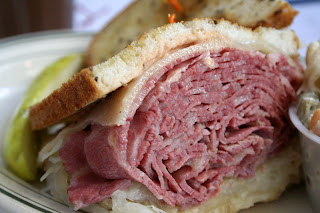 preferring a thinner layer of meat spread evenly over the bread.  I grilled it with just the meat and cheese so the cheese would have a better chance of melting, then added the kraut and dressing when it came out of the skillet. 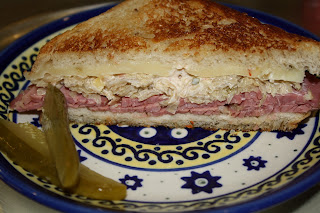 I’ve posted about Reuben's and corned beef sandwiches in the past but added this one because of the different cheese.  The pepper jack provided a nice heat, which I really liked, and it may be the standard around here from now on, or maybe Swiss with a little crushed red pepper.

Have a great day and thanks for stopping by Almost Heaven South
.
Larry