After Susan, at Savoring Time In The Kitchen, posted about Mamma Agata’s Eggplant Parmesan and the cookbook it came from, I had to order one – even though I’m not a big user of cookbooks, preferring your blogs instead.  So for $53, I now have an inscribed copy for us to use and pretend we’re overlooking the Mediterranean from the Amalfi Coast rather than overlooking Tellico Lake from Almost Heaven South, which really isn’t too bad.


Bev had bought a couple of links of fresh-made hot Italian sausage from The Market in Maryville and we had the last of our garden peppers in dire need of being used, so I opted to use Mamma Agata’s Sausage and Peppers recipe, but made the dish with what we had on hand.
Marie over at Proud Italian Cook made the dish back in May if you want to see it made by Mamma’s recipe – I had saved it back then to try.  She also has more and better photos than me.
Sausage And Sweet Peppers
Adapted from Mamma Agata


Directions:
1. Saute peppers in oil until softened, 10-15 minutes, remove and drain on a paper towel. 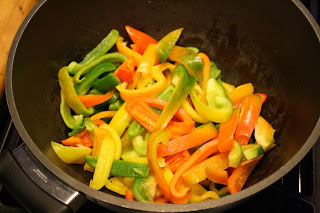 2. Melt butter and EVOO in another pan over low heat, add chopped onion and cook until golden brown.  (I cleaned out and used the same pan).
3. Add the sausage to the pan and sear on all sides, cover the pan, and cook for two more minutes. 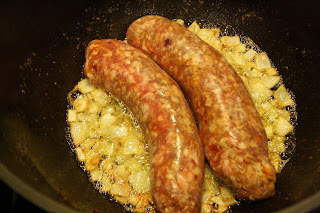 6. Add the chopped cherry tomatoes, salt, dried basil, and tomato sauce, cover pan and cook on low for 30 minutes.
7. Remove the sausage, cut into smaller pieces and return to the pan.
8. Meanwhile cook the pasta al dente in salted water, drain and add to the sausage/pepper pan.  Toss and cook for a couple of minutes to marry the flavors. 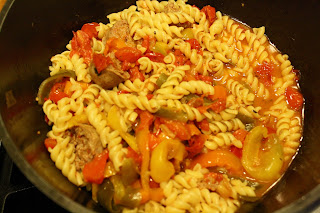 9. Serve and top with fresh grated parmesan.  (My plated shot was a bust).


For pasta dishes with chunky ingredients, I find shaped pasta easier to eat so I used rotini.  The three of us who ate it all thought it was delicious but mine didn’t look like the other two I’ve seen as my sauce had more liquid – enough that I added the entire pound of pasta I’d cooked.  While I cooked it the specified 30 minutes, I may have cooked it a little too long and should have gone by appearance rather than the clock.


The sausage wasn’t overly hot and worked very well in the dish.  I had trouble getting it to sear in the onion pan so next time I think I’ll sear it in a little oil before adding the remaining fat to cook the onions.  I’ll remove it while the onions cook than add back at the appropriate time.  It is definitely a keeper recipe and I can only imagine how good it would be made by Mamma Agata - I look forward to the next one from Mamma's book.