I’m so excited because of what Bev called me outside to show me, but let me back up. I searched, but couldn’t find where I’d ever blogged about this, but sometime last year, I inoculated six logs with three kinds of mushrooms – Maitake, Shiitake, and Pearl Oyster. I drilled about 300 hundred holes in six logs, drove in the inoculated plugs I bought from Fungi Perfect, and sealed the holes and log ends with bees wax. I’d been checking on them regularly but not much was happening until today. I don’t know how fast they grow, and most of these got too big, but while we were off to NOLA, we got our first shiitakes - that's a dinner plate they're on. I'll try to remember to get a photo on the log next time. 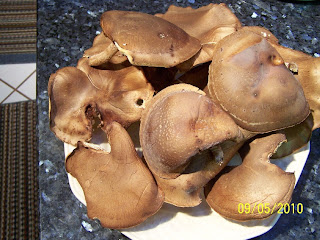 I haven't seen anything out of the other two varieties and I think it's due to their location. I'll move them to the shiitake area where there is more shade and they get more water from the sprinkler system. I checked pictures of them in a couple of places and when I was satisfied they were the real thing, I ate a raw one and didn't die, so they're good to go.

For breakfast the next morning, I cut up one of the smaller ones and sautéed it in olive oil. I can’t remember if I’ve had fresh shiitake’s before but they are flavorful and don’t shrink up as much as button mushrooms. 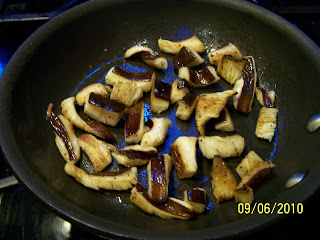 I poured in a couple of beaten eggs to which I’d added a few shots of Tabasco Garlic Sauce and some Tillamook cheddar. Here’s the finished dish, sided with a piece of the green onion sausage from NOLA - I split and grilled it, then shared with Bev after I took the picture. 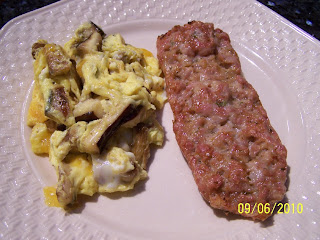 Good start to the day I'd say. Have a good one and thanks for stopping by.