For those of you who’ve read this blog from near the beginning, you may recall that as an ex-engineer, I’m pretty anal about many things and having a plan has always been one of them. But I continue to get better and we started this trip with only a route plan and decided what to do as we went. I did come equipped with some gulf coast suggestions from southern Mississippi resident, Mary at Deep Dish South Dish and ex New Orleans area resident Katherine at Smoky Mountain Cafe and a map of Diners, Drive-ins, and Dives (DDD) places along the route and in lower La.

When we got up Friday morning and knowing we couldn’t check into New Orleans (N.O.) before 4pm, we decided to hit the Mississippi gulf coast. Just before Mobile, it began raining hard, so any pictures are in the rain and it made beach pictures worthless. We like to do a little entertainment gambling, so we put that on the afternoon’s agenda. We got off of I-10 west and drove to the beachfront road in Biloxi and headed west - the road runs between the beach and the ocean front property. It was unbelievable the amount of vacant land for sale where fine homes stood 5 years ago (pre Katrina) and there doesn’t seem to be any new building going on – which I sure wouldn’t do either. I can only imagine the sadness felt by the residents as they drive through the area.

We got to the area about lunchtime and decided to try a DDD place called the Blow Fly Inn – which has also been rebuilt since Katrina. Here's the outside and inside. 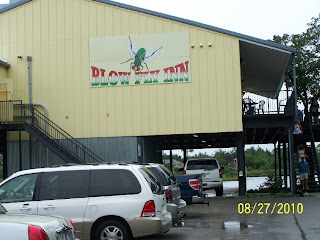 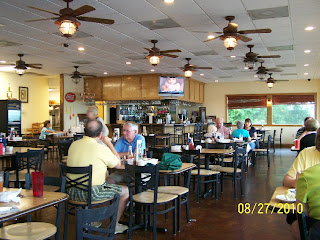 It was located at the end of the road in a not very prosperous residential area – odd place for a restaurant I thought. I had the chef’s special of fried soft shell crab (a first) atop angel hair pasta. I forgot the camera until half way through it. 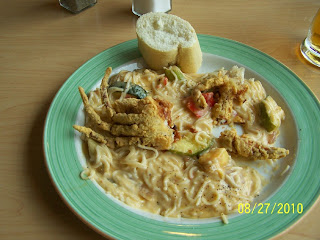 Bev had fried green tomatoes topped with jumbo lump crabmeat and creole hollandaise. Since the server said the whole fried crab was an acquired taste, I was expecting a flavor explosion, but found very little flavor, especially when pared with the tangy pasta sauce. I’d have to say the meal was good but nothing special, except I really liked the remoulade salad dressing. Bev’s was just ok as well – I think we were both expecting much more flavor. In hind site, I should have done my normal and asked about the house specialty or the most requested item on the menu.

After lunch, it was off to the casino in Gulfport for a couple of hours of penny slots – of course by the time you play a penny or two on all 30 lines, a dollar only gives you three pulls. I was lucky and Bev not, but we had about 2 ½ hours of fun for $30 – about the same as two movie tickets and popcorn.

We rolled into N.O. about 6pm and the interstate became a parking lot. Little did we know we had to pass the Superdome where the Saints were playing a 7pm football game. But we were settled into our room on St Charles Street, in the Garden district, by 7:30 and set about relaxing.

Tune in tomorrow for more and thanks for stopping by.