IF YOU HAVEN’T, PLEASE READ ABOUT THE BLOGGER PARTY AT LINK

I mentioned in the BLT post last Wednesday that Bev makes great sandwiches, in part, because she’s willing to go the extra mile to make it special. While she does this with most of the things she cook’s, the other dish she is renowned for in our family is her salads. This is the one we ate for lunch after the breakfast BLT and in addition to the hard boiled eggs that she made just for the salad, it had lettuce, cucumber, broccoli, cauliflower, red onion, cherry tomatoes, Canadian bacon, Cabot sharp cheddar, and Thousand Island dressing made from the Waldorf Astoria’s recipe. 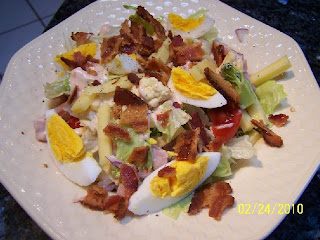 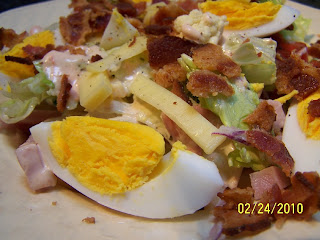 As the story goes, 1000 Island Dressing is believed to have been initially invented by fishing guides in the 1000 Island region (hence the name) of the St Lawrence River, where it was served to fishermen on a wedge of lettuce along with deep fried fatback sandwiches for lunch. It then came into the hands of the owner of the Waldorf-Astoria Hotel, who’s chef refined it and put it on their menu and they rest is history. I think I’ve posted the recipe before, but here it is again and it only vaguely resembles those from a bottle (which I don’t care for but love this one).

Stir all ingredients until well combined.

If you haven’t, you owe it to yourself to give this one a try, even if you don’t like the dressing normally – just make up a small sample batch.

In the recent past, I’ve posted about buying whole packer steak cuts, carving them ourselves, putting in Foodsaver bags, and sticking them in the freezer. Over the years, we’ve bought meat just when we wanted to have it for dinner and we’ve bought whole or half beefs, and we’ve finally found what works best for us. When a store, who’s meat we like and trust, runs a good special, we stock up on what we’ll eat in the next six months and put it in the freezer. This way, it won’t have it stay in the freezer for an extended period, we only get the cuts we want (I don’t eat that much beef liver), and we think it actually turns out to be cheaper than a half beef. In talking with the local butcher, I’ve learned that the come-on price advertised in their weekly flyer, such as 98 cent/lb pork butt, is being sold at their cost, just to get us in the store.

The nearest market to us generally carries select grade beef only, so I never buy steak from them, but we’ve found their ground beef to always be outstanding. So when they ran a ground chuck special for $1.78 per pound, we bought 20#, put it in 1# and 2 # packages and put in the freezer. 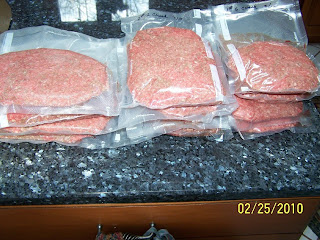 I use this same purchasing system for my BBQ meat and it works very well for me. I know this is pretty basic info for most folks who cook, but I thought there might be a nugget for a person or two.

The title photo is of the Smoky Mountains shot from my neighbor-on-the-hill's yard.