Brisket Chili On A Winter Day

I smoked a brisket the other day for making into chili – first time to make it with brisket and since Tuesday was supposed to be a cold, snowy day, it seemed like a good match. Many folks on the various BBQ forums I read rave about their brisket chili so I wanted to give it a try. I considered using an entirely different recipe, but since the purpose of this batch was to test brisket against our normal ground beef, I made no other changes. I also considered working on my taxes in my office downstairs, building a fire in the fireplace and making it in a Dutch oven using the free heat of the fireplace coals, but the working-on-my-taxes-part was a non-starter, so just made it on the stove.

I normally get up early and by mid afternoon, I’m usually ready to call it a day. But since this is prime dinner prep time, I’ve figured out I need to get the serious prep done early. So for today, I got all of the chopping done by noon so I could throw it all together around 3pm. I had about 2 1/2 pounds of smoked brisket which I diced into about 3/8” cubes, which took awhile. I’ve watched chili competitions where they seem to spend hours cutting up big pieces of meat in to precisely the same sized small pieces – I didn’t do that. I got all of the other ingredients ready to go as well so all I had to do was dump it together and adjust the seasonings. 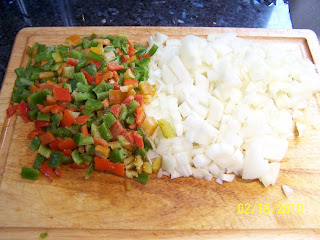 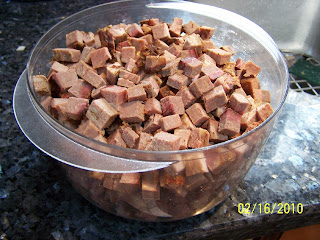 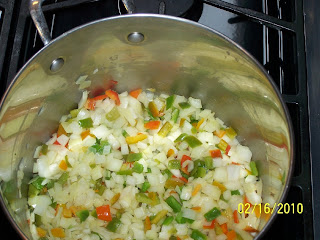 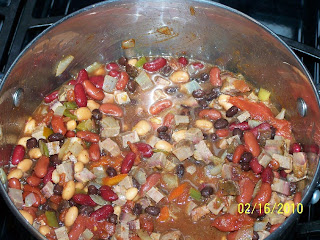 At the end, I added a little salt and about 5 squirts of Sriracha for some heat – can always add more to the bowl. This turned out to be the thickest chili I’ve ever made and I really liked it - the chili powder and brisket flavors worked well together for me. 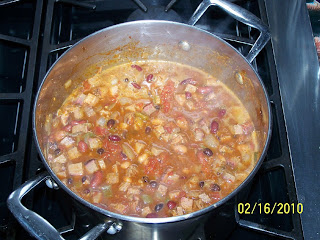 I know to the chili purest, beans are a no-no but for me lack of beans makes it tomato beef soup – guess it’s all about how you were raised. I will definitely make this again – one of the major differences is the texture of the have-to chew-it brisket vs the ground beef. If you want to try it give me a shout and I’ll smoke you a brisket – for pick up of course. This pic shows my bowl full topped with the lime-crema from Mangos, Chili and Z and I liked the effect it had. And the icing on the cake was that Beverly liked it both before and after the crema addition. 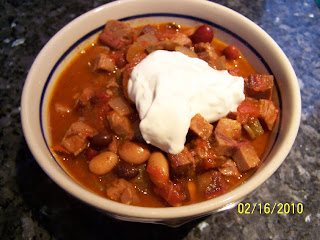 One of my chili highlights involves the powder. Several years ago, I came up with a complete chili (not chile) powder containing everything needed but salt and made from my homegrown peppers. A while back, I bought some chili powder from a rub maker who’s product I use a lot of and after giving it the smell test, I decided mine needed a lot of work. So we made a batch of chili with the purchased powder and ended up adding some of mine to fix the taste. I realize everyone’s tastes are different, but it was a feel good none the less. I thought about marketing mine, but what makes it unique is the homegrown and dried peppers which taste fundamentally different (better) than purchased and that would be more farming than I wanted to do. So I just make it for the kids and us and to give away at Christmas.

The title picture shows the GIANT snowfall (maybe 3-4 snowflakes deep) from the SEVERE weather (as described in the 6am call from the school system) that resulted in school cancellation on Tuesday – I get such a kick out of this. I believe the weather man had an off day, but it was still a cold day for chili.

Have a great day today.