On Wednesday, I hung around the coach while it and the car got washed and waxed by a local crew and the girls made a third trip to the Kino Gem Show but this time they came home with wood tables and lamps purchased from a guy from Estes Park, CO – I had to make two trips to get all of the stuff plus the girls back home and not sure where we will put it while traveling.

Thursday was supposed to be cloudy with chance of rain so we decided it would be a good day to visit the indoor Biosphere II (B2), which was about a 75 minute drive around the mountains to Oracle, AZ.  As we drove the two mile road back to B2, I kept expecting it to pop into view but it did not and during the tour we were told that an area was excavated and the dirt used to build a berm around it to keep it from view and prying eyes.  The pics are a combo of mine and from the web pics. 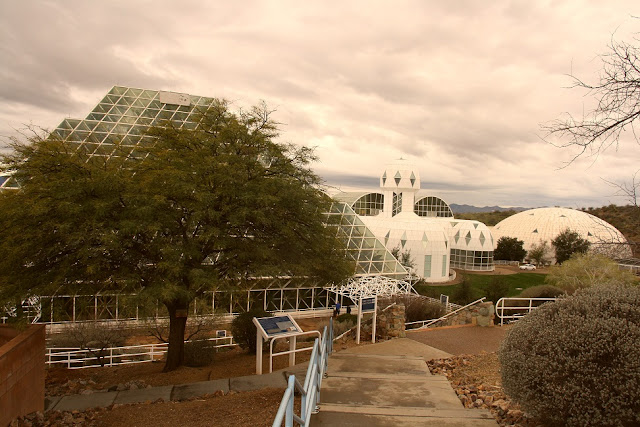 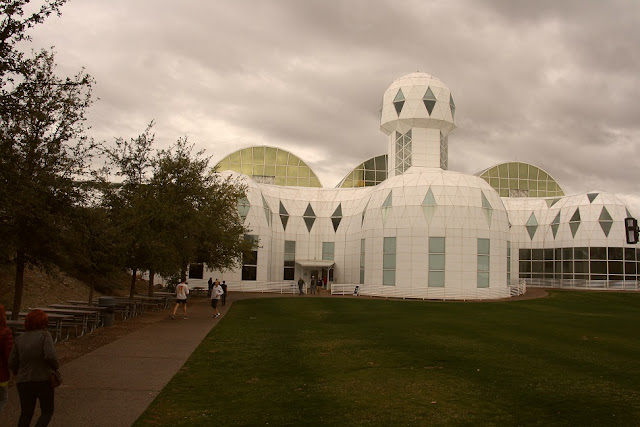 Following are some excepts from Wikipedia:

"Biosphere 2 is an American Earth system science research facility located in Oracle, Arizona. It has been owned by the University of Arizona since 2011. Its mission is to serve as a center for research, outreach, teaching, and lifelong learning about Earth, its living systems, and its place in the universe. It is a 3.14-acre structure originally built to be an artificial, materially closed ecological system, or vivarium. It remains the largest closed system ever created."

"Biosphere 2 was originally meant to demonstrate the viability of closed ecological systems to support and maintain human life in outer space.  It was only used twice for its original intended purposes as a closed-system experiment: once from 1991 to 1993, and the second time from March to September 1994. Both attempts, though heavily publicized, ran into problems including low amounts of food and oxygen, die-offs of many animals and plants included in the experiment."

The experiment involved 8 people plus animals living in the sealed system for the two year period and I can remember the publicity on TV.

They are now performing planet saving experiments such as how the rain forest reacts to CO2 and temperature and trying to breed a super coral that with thrive in more acidic ocean waters - I believe they said half of the earth’s coral has already been lost.  They have a rain forest section. 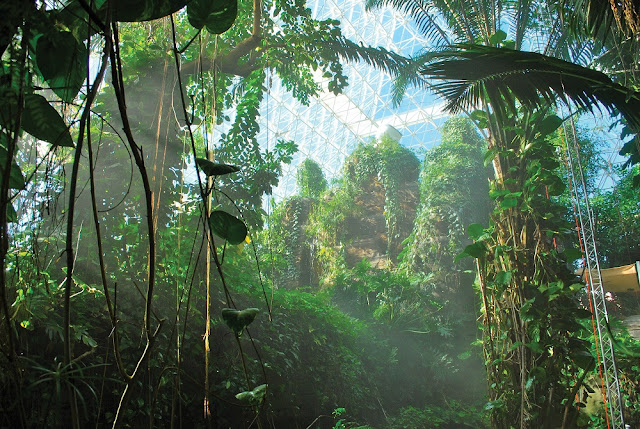 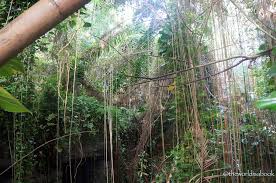 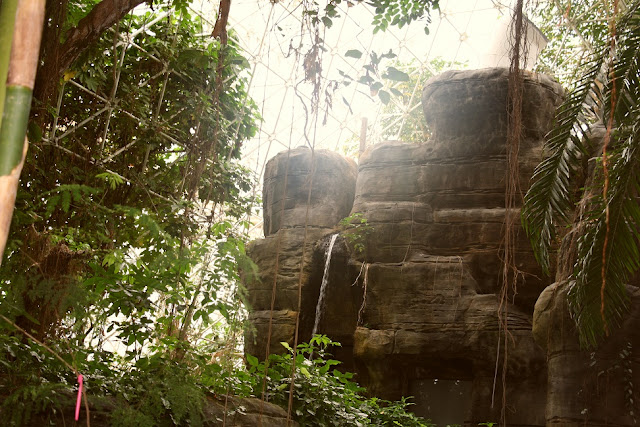 A brackish water section to study the importance of mangroves in removing toxins coming into the ocean from the fresh water. 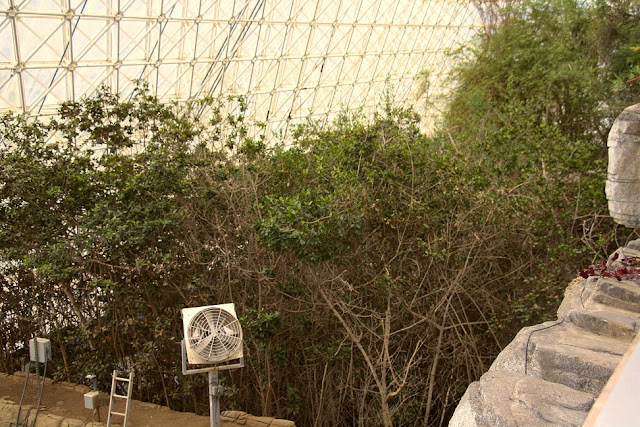 An ocean section to study many things including plants, animals, and corals where they can vary many ocean aspects to see how they react. 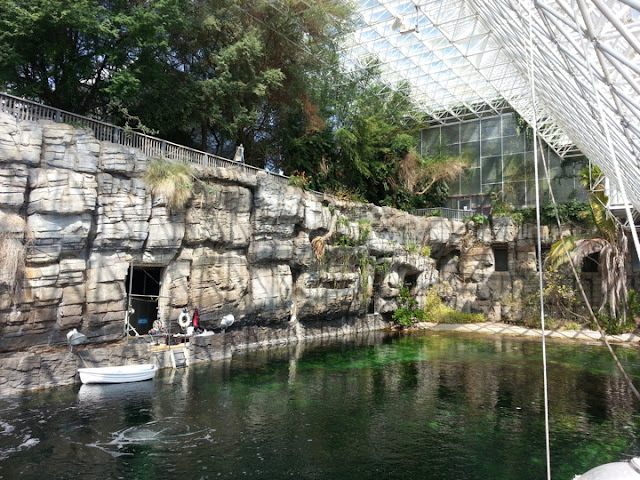 A desert section allows them to study the desert under controlled conditions. 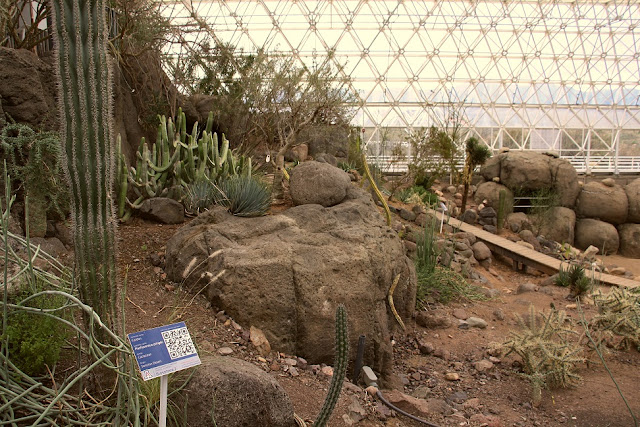 And a large new experiment called the Landscape Evolution Observatory (LEO), which uses 1800 sensors to monitor millions of pounds of abiotic volcanic rock to track how this nonliving soil slowly develops over several years into a rich soil which is able to support microbial and vascular plant life.  It's inside these three units. 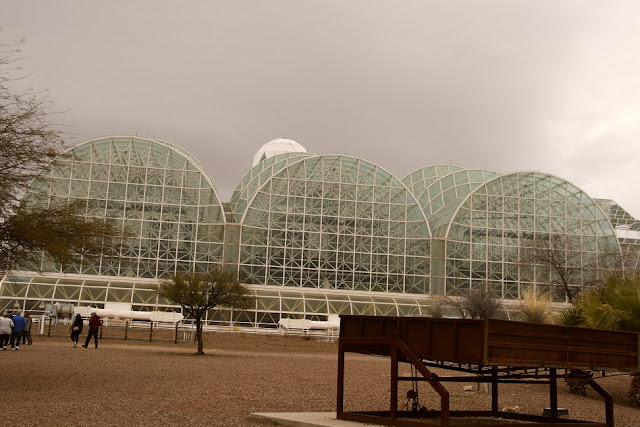 One of the most fascinating parts was the lung used to maintain pressure inside B2.  As the sun heats up the air inside the facility, it expands several times in volume which raises the pressure significantly and could blow out the walls and the same happens in reverse when it cools which could cause an implosion.  To solve this, they have a giant rubber membrane with a weight hanging on it and as the pressure inside B2 rises, the bladder expands and raises and when it cools it shrinks – I thought this was way-cool engineering and we knew what it was doing by which way the strong wind was blowing as we exited through the hatch door. 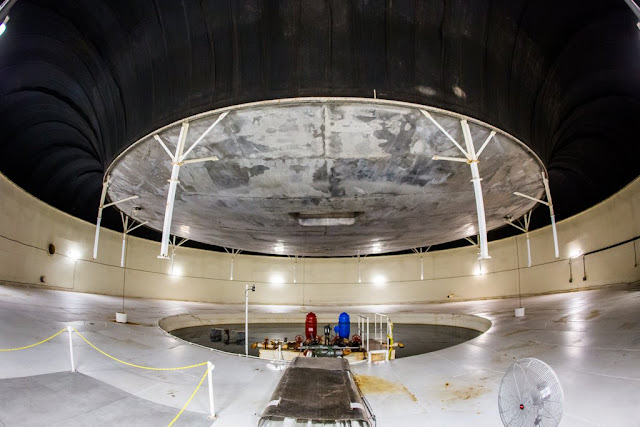 The tour was well worth the $19/ea. and our tour guide was excellent – if in the area and you are the least bit interested in the earth’s systems, this is a must stop.

While I was tired and my hip was hurting, I managed to make the 1¼ mile walk including several flights of stairs, but I was sure glad to get back to the coach and get into a none painful position.

The only negative to the day was not being able to eat at Chef Alisah’s Restaurant which I had seen on Diners, Drive-ins, and Dives.  We arrived about 4:15 only to discover that the Bosian food place was closed between 1:30 & 5:30 and I’m not sure we’ll be up that way again or be willing to make a 15 mile special trip across town.

Photos can be enlarged by clicking on them and the blue words are links.
Have a great day and thanks for stopping by Almost Heaven South.