I’d seen this recipe when Mary at One Perfect Bite published it and put it on my try-list then Diane at Voice In The Garden published it, but I was ready.  Just the previous night, we had grilled a whole sockeye salmon filet and ate less than half so we had the remainder lounging around in the fridge awaiting this recipe.

Since we had more than enough, we invited Bev’s sister and neighbor Pat to join us for dinner on the dock.

The recipe is available on the other sites, but I decided to post the ingredients list to show how we made it (in parenthesis ) – joint effort between Bev and I.  First I had 10 oz of salmon, so I scaled everything up to match.

¾ cup small-diced red onion (1 cup of our sweet white onion)
1 ½ cups small-diced celery (1 ¾ cups)
½ cup small-diced red bell pepper (5/8 cup of our Sante Fe Chili)
½ cup small-diced yellow bell pepper (5/8 cup of our Sante Fe Chili)
¼ cup minced fresh flat-leaf parsley (1/3 cup)
1 tablespoon capers, drained (1 ¼ tbsp.)
¼ teaspoon hot sauce (1/3 tsp)
½ teaspoon Worcestershire sauce (5/8 tsp)
1 ½ teaspoons crab boil seasoning (1 tsp Zatarains Pro Boil)
3 slices stale bread, crusts removed (1 cup store bought bread crumbs)
½ cup good mayonnaise (5/8 cup Dukes)
2 teaspoons Dijon mustard (2 ½ tsp)
2 extra-large eggs, lightly beaten (3 eggs)
½ tsp salt (zero)
½ tsp black pepper (1/2 tsp)
Bev did the veggie prep by removing the ribs and seeds from the peppers then chopping everything together in the food processor and it made them just right.  Since my salmon already had a good coat of Emeril’s Essence on it, I reduced the crab boil addition.  Also since the crab boil was real salty, I decided to wait until the veggies were done to add salt and they didn’t need any, then I tasted again after mixing everything and it still required no additional salt. I went ahead with a third egg, but then I ended up with a mix that was too wet, so I’ll stick with 2 next time.  We just used the veggies we had from the garden and they all worked fine so we were able to make the dish without a trip to the store.

Before the entree, we began the meal with a Caprese Salad using a recipe from Pioneer Woman via tastykitchen.com. 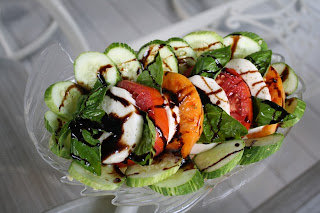 We've had this a few times and although it was tasty, we like other salads much better.  While the whole basil leafs make for a nice presentation, I believe it would be tastier and easier to eat to chiffanade the basil and build as a tomato slice-basil-cheese then repeat ending with whole basil like Bev did.

Not able to pass up a taste test opportunity, I cooked one  cake with a Panko coating and one without then I added some remoulade to mine again for a taste test.  Here’s my plate with included some Blue Ribbon green beans cooked with a ham hock and some of our potatoes. 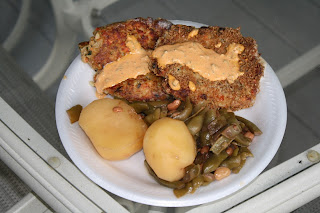 Just as the previous posters found, we all thought the crab cakes were delicious - even Bev who had said earlier that they contained too much other stuff that would overwhelm the salmon.  I liked them equally well with or without the sauce.  This is now the go-to recipe for salmon cakes and sure beats the canned salmon, oats, egg, and onion, topped with ketchup, version I grew up on.  With three strong endorsements now, you may want to give these a try if you like salmon cakes.

Since we have varieties of blueberries that bear at staggered times, we are still getting lots so Bev decided to whip up a little dessert of blueberry turnovers.  She used this recipe from Giada Di Laurentis.
Blueberry and Mascarpone Turnovers

Directions
Special equipment: a 3 1/2-inch round cookie cutter
Line a baking sheet with parchment paper. Set aside.
In a small bowl, mix together the cheese, sugar, cornstarch, lemon juice, and lemon zest until smooth. Stir in the blueberries.
Using a 3 1/2-inch round cookie cutter, cut the pie dough into 12 circles. Place the dough on the prepared baking sheet. Using a pastry brush, lightly brush the edges of the dough with the beaten egg. Place about 1 1/2 teaspoons of the cheese mixture in the center of the dough. Fold the dough in half to enclose the filling and pinch the edges to seal. Using the tines of a fork, gently crimp the sealed edges. Refrigerate for 10 minutes.
While the pastry is chilling: In a large heavy-bottomed saucepan, pour enough oil to fill the pan about a third of the way. Heat over medium heat until a deep-frying thermometer inserted in the oil reaches 375 degrees F. (If you don't have a thermometer a cube of bread will brown in about 3 minutes.) Fry the turnovers for 1 to 1 1/2 minutes until golden. Drain on paper towels and sprinkle with sugar while still hot. Cool for at least 10 minutes before serving.
I was cooking in the semi dark and had no device to tell me the oil temp so I’m not sure what it was but here they are cooking on the grill side burner.  Note the dark spot in the center from laying on the pan bottom – next time I’ll deep fry they to eliminate that. 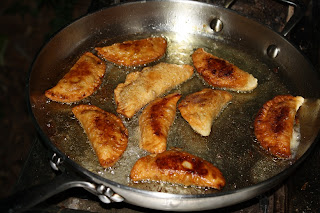 Rather than let them cool, we topped with some good vanilla ice cream let over from our dock dinner party and they were very good. 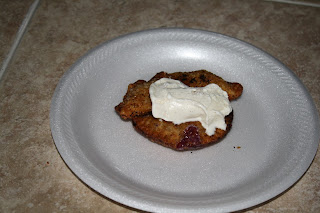 Just another nice evening at the dock and I only had to go for two swims to cool off although the water temp feels the warmest I’ve ever seen it – more like diving into a warm bath.  It takes a dive down about 5’ to hit some cooler water.

One year ago:   A BBQ Send-Off