We eat a lot of less than healthy meals here at Almost Heaven South, but every now and then we do better and this was one of them, except for the butter.  This meal consisted of grilled salmon and Quinoa Tabbouleh Salad.  Even though we have salmon in the freezer, Bev couldn’t pass up a good deal on wild caught sockeye salmon in the store the other day – hard to believe how red it is. 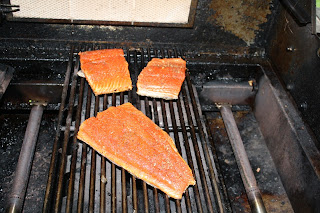 I just oiled the salmon all over then added some Emeril’s Essence (with extra cayenne) to the top side.  I grilled it over medium high heat until I could remove the skin and flipped it.  To the skin side, I brushed on some melted butter and sprinkled on more Essence, but rather than let this side cook completely, I flipped again and brushed with more butter, then repeated.  I cooked it to about 140* and removed. 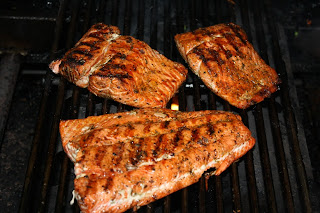 Awhile back, several of you had posted recipes made with quinoa and I bought some, which has been in the pantry for a couple of months.  Bev found this recipe in one of the newspapers and decided this was the night to try it.
Quinoa Tabbouleh Salad
1 cup pre rinsed Quinoa
2 cups chicken broth
3 tomatoes, diced
¼ cup fresh minced parsley
¼ cup fresh chopped mint
1 medium cucumber, peeled and diced
¼ cup red onion, diced
3 tbsp olive oil

Place rinsed quinoa and broth in a heavy saucepan over medium high heat and bring to a boil.  Reduce heat to simmer, cover and cook until water is absorbed, about 15 minutes.  Stir in remaining ingredients.  Chill about an hour before serving.  Toss once or twice while it’s chilling to distribute flavors.  We were concerned about the mint flavor so she omitted it and used double parsley.

Here’s my plate and I thought both were delicious – this won’t be the last quinoa dish. 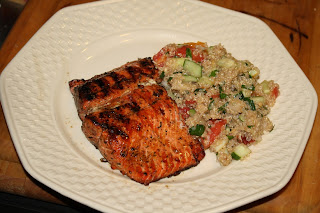 All photos can be enlarged by clicking on them.
Have a great day and thanks for stopping by Almost Heaven South.
One year ago:  Fried Cheesey Grits and Stuff
Larry
Posted by Big Dude at 4:21 AM