We had some thick cut pork chops in the frig that I planned to use for a Giada recipe, but we’ve had trouble getting to the store to buy the ingredients, so I went to plan B. Bev especially likes blackened meat and the times we’ve tried it, we’ve been dissatisfied. After reading Dave’s blogs on the subject over at My Year On The Grill, I realized I’ve not been considering it a cooking process - so we tried it his way. Since it was in the mid 80’s outside and I didn’t want to add more heat to the house or trash the stove, I cooked it outside on the grill, using the side burner to blacken it and the grill as an oven to finish it. I pretty well did as Dave directed - one tbsp of butter and tsp blackening per chop, then inserted a probe and finished it the oven (grill), except I only cook mine to 145* internal – we like our pork to be a little pink. Here are a couple of shots of the cooking process. 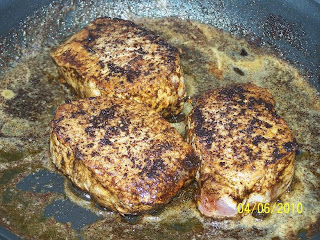 And since the grill was on, we still have several of the large ugly sweet potatoes to use up, they go well with pork, they’re nutritious, and Bev said she really liked what I had done the last time – no brainer. All I did was peel and cut into about ¾” slices and parboil until nearly done. I then, coated them with olive oil, sprinkled on a little Tiger seasoning, S&P and grilled until I got a little char. When I took them up, I added a pat of butter and served them up. For the true Southerner’s, a little brown sugar would have probably gotten involved. 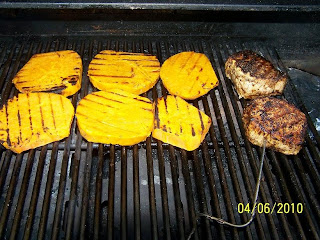 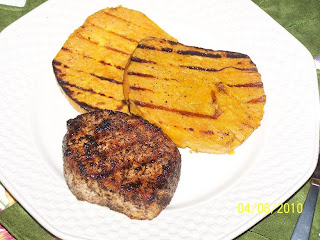 Everything worked very well, especially the cooking process. The only negative was that my blackening seasoning was old and left a lot to be desired. I’ll make up a fresh batch and try again.