If you’ve grown asparagus, you already know what follows, but if not, you may find this interesting. When you buy asparagus and look at the odd collection of shapes on the tip, did you know that you are actually viewing the branches to be? As the plant grows, each of those knobby looking things on the tip will become a branch and then a fern looking frond. Later I’ll post a pic of it in full fern mode. These have already loosened a little. 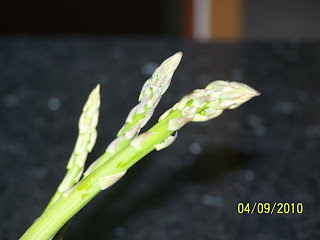 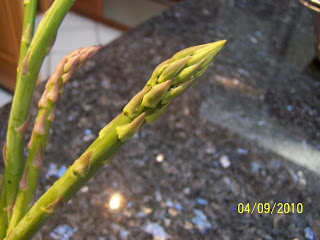 If you grow it and don’t get it picked soon enough due to a trip to Virginia, followed by a day of rain, followed by a BBQ day, it goes ahead and begins to open. As the stem keeps growing, the branches get further apart and the little things on the end of each branch open into the frond. 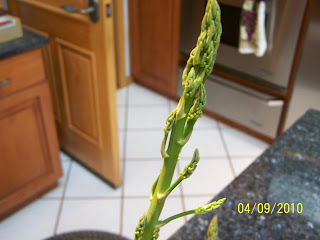 Fortunately, this has no impact on the taste but it doesn’t look normal. 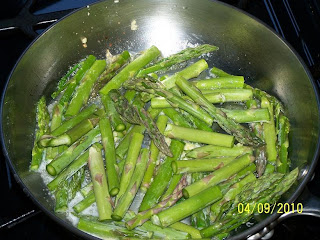 For dinner tonight, I just sautéed it in a little olive oil, butter, garlic and added some parmesan to go with some leftover BBQ brisket from yesterdays cook – I added a little Gates Extra Hot BBQ Sauce for a little pizzazz. 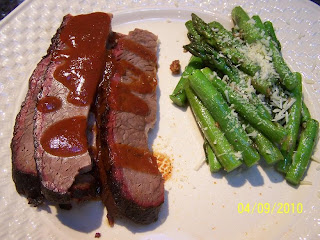 With Bev’s mom still in the hospital and her gone every other day, we’re eating a lot of what-can-we-find-in-the-frig meals and usually not with each other – eg. the above supper. I thought the sauteed asparagus was very good and had the makings of an even better breakfast, so I just stuck pan and all in the frig for the next morning. I warmed it up slowly and when the pan was ready, added some beaten eggs and farmers cheese for a nice little scramble. The one negative was the eggs sticking to the stainless pan - as usual. I normally use non stick for eggs and if I'd planned ahead, I would have used a non stick pan from the beginning. 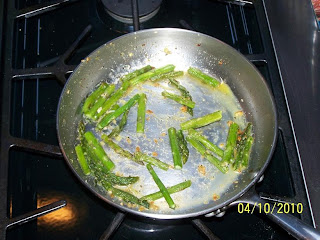 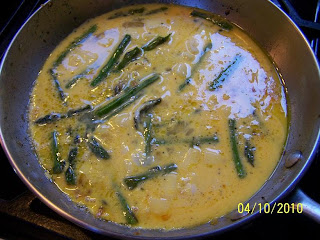 I topped it with grated parmesan and sided with a couple of slices of reheated sirloin left over from supper – April 9th post. 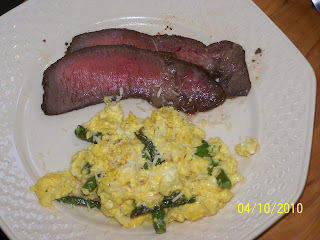 Note a bad throw together if I do say so myself, and the best part was Bev was here to share it with me.

The above post has been in the que for a few days and this is an update. The pics below are what I picked yesterday and we'll get this much every day or two for the two months of picking. The one on the far right has the tight head you're used to seeing in the store. 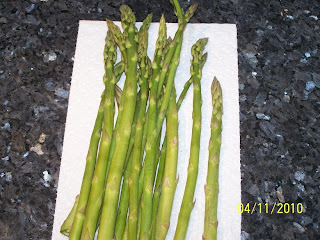 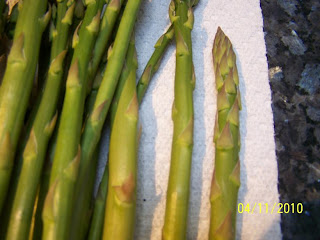 If you really like good asparagus and have a small piece of ground in full sun, you should consider planting some. A dozen roots planted two feet apart in each direction will provide plenty and once planted they last for several years (mine are over 10 years now). They are low maintenance (a little fertilizer twice a year) with only the occasional pest problem - you pick them every day for 6-8 weeks, then let them fern out, then mow them off when they turn brown in late fall - easy peasy and the best you've ever eaten.

The title pic is a camellia bloom which is just full right now.