Sunday, it was a Valentines Day supper for me and my girls – wife, daughter, granddaughter, sis-in-law, and mother-in-law – am I a lucky man or what? I’ve been wanting to cook Beef Wellington for a while and thought we might for Valentines day, but we ended up with too big of a diversity of meat doneness desires, so I just grilled some steaks instead. I had a nice piece of filet that I cut into three steaks for those that prefer them and cooked a strip for Wende and me. I just put some salt, pepper and Tiger seasoning on them. 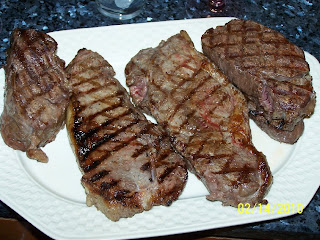 For side dishes, we had a salad ala Beverly (she takes the time to make the best salads around) and mashed potatoes ala Da Cajn Critter from Dave’s post over at My Year On The Grill. I really liked the ingredients list and they turned out very good except I got them a little too garlicky for some taste – I ran the cloves through the garlic press and estimated the amount. Wende did the mashing and sure made them look good. 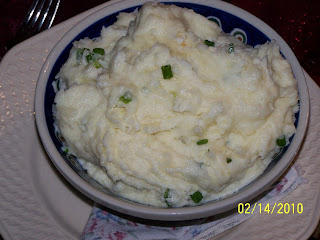 We also made a bowl of plain ones for Alex and for leftovers but I ended up mixing them all together – I feel some serious potato cakes coming on.

Here’s a pic of my plate – I obviously like mine medium rare. 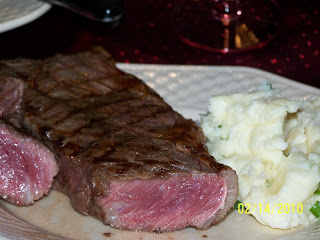 To complement the beef it was a choice of V. Sattui Cabernet or Zinfandel - we actually drank the Zin while cooking and the Cab with dinner.

Since this was bread day, we also had it hot-out-the-oven with dinner, and for dessert, Bev made some iced cinnamon pecan rolls using her bread and a stuffing and icing recipe from Recipezaar. I forgot to get photos, but they were tooooo good.

The title photo is a passing snow shower Sunday afternoon with nice big flakes. Not enough to lay, but it was pretty falling.

I finally got around to putting up a picture of myself with my profile – hopefully it won’t scare anyone off.