Every now and then, we just have to whip up something really fancy – and last night was the night. As a kid in northern West Virginia, the favorite dried bean around our house were navy beans and they were referred to as soup beans and usually served with white bread. We occasionally had pinto beans and they were called brown beans and usually served with cornbread. Both were often sided with fried potatoes and that was the meal. I’ve had fried potatoes and I’ve had dried beans, but I can’t remember the last time I had them together. So for dinner last night, we used the ever fancy and expensive bean variety pictured below. 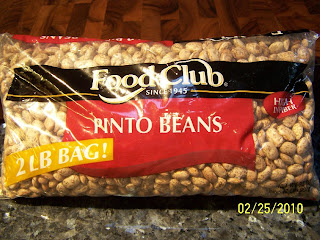 They were picked through, soaked over night, then rinsed and cooked all afternoon with a nice smoked ham hock. 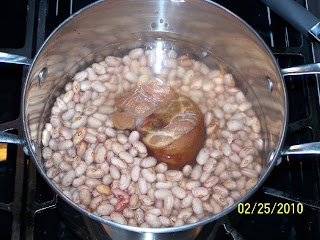 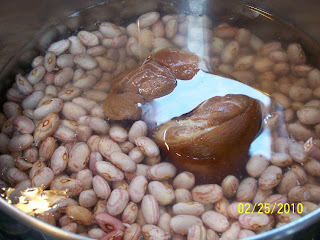 We like to keep a supply of both russet and waxy potatoes on hand and the other day they were on the store list. When I ran over to the local place, I saw they had both on sale so I bought two bags of each and while Bev was at the store, she remembered potatoes on the list and bought a bag of each. We obviously need to eat some taters, so I have an excellent reason to recreate this childhood meal.

Mom used a cast iron skillet and bacon grease, but I fried up some of the potatoes in a non stick skillet using olive oil and just a little bacon grease and added some onion and sweet peppers – Mom never added peppers as Dad didn’t like them. I cook them with a lid on until about done, then take it off so I can get a little crust on them - have to be careful with the onions and peppers at this point though. They are almost done in the title pic. 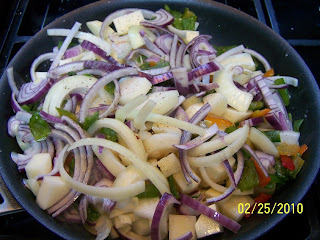 Bev made up a 12” cast iron skillet of cornbread using the Three Rivers recipe. I didn’t grow up eating cornbread except with beans, and I really like it, but only under two conditions – hot out of the oven or covered with some type of hot liquid. If I’m served a room temperature corn muffin with a meal, it goes uneaten unless I can incorporate it into the meal – crumble in a bowl of chili for example.

Here’s a shot of my plate as I’ve always eaten the beans and cornbread - soupy enough to soak in the cornbread and topped with a little chopped onion. 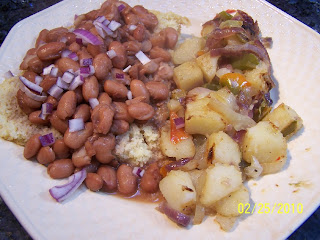 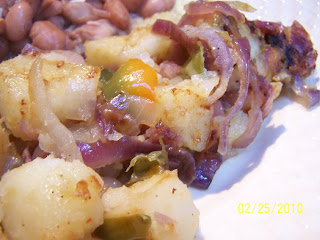 I have eaten some pretty fancy and high dollar meals, but I’d have a hard time saying I enjoyed them any more than this. It’s hard to beat the basics I grew up on.

Have a great day and I hope those of you in the Northeast are faring okay with the new snow storm.