If you saw the Goldie Hawn and Chevy Chase movie “It Seems Like Old Times” then you have likely heard of Aurora's Chicken Pepperoni and while I don’t think it was a real dish before the movie, several recipes have since been produced.  We’ve made the dish a few times with different recipes and the one below is our favorite.  It comes from Kelly on her Wildflour’s Cottage Kitchen blog and it makes plenty of sauce for the chicken and a side of pasta. 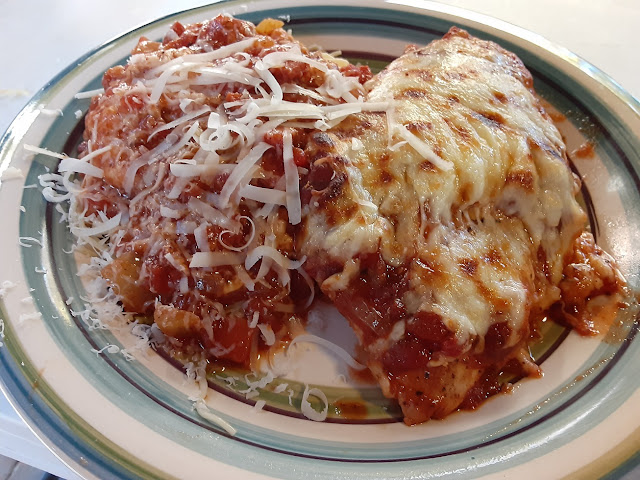 Bev has been craving it so we made it as the Thursday night meal for our friends but making it more of a casserole for them by adding sauced pasta to a baking dish then topping with the fried chicken, remaining sauce, and cheese prior to baking.  For ours, I had six large chicken breasts and wanted leftovers so I made one and a half times the sauce to get the recipe below.

You can stop by Kelly’s blog for her original recipe for four breasts and good how-to shots.

28 oz. can whole peeled plum tomatoes such as Hunt's, break up tomatoes

1. In a large deep frying pan, heat butter and oil over medium-high heat, stir to mix. When hot, sear pounded chicken breasts (that have been seasoned to taste on each side with salt and pepper) until lightly browned on each side. I did this in two batches as not to overcrowd the pan. Remove to a plate or baking dish, cover, set aside. 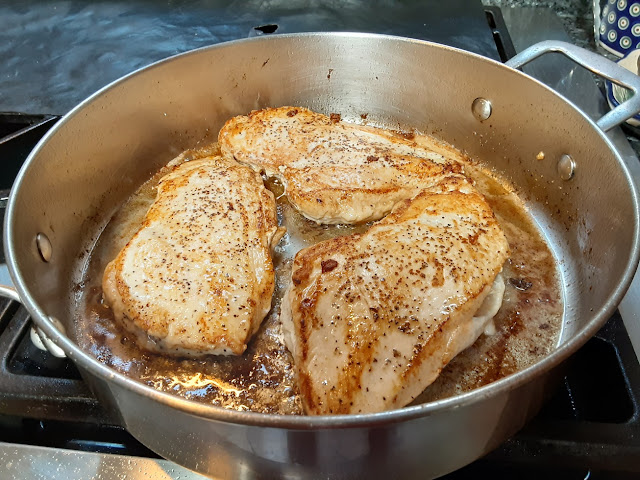 2. Remove pan from heat (do not drain oil and butter), add wine carefully, let steam subside and stir and scrape bottom of pan.

4. Add all tomatoes, breaking up whole tomatoes with your hand as you add them, and rest of ingredients *except cheese and dried parsley. Stir well to mix, bring to a low boil, reduce heat to a simmer, and simmer for 10 minutes, stirring as needed, occasionally, making sure there's no sticking on the bottom of the pan. 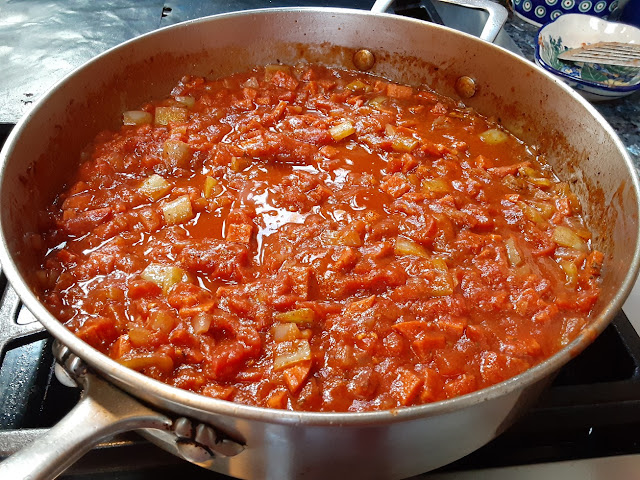 5. Add chicken to a baking pan and pour in the sauce. 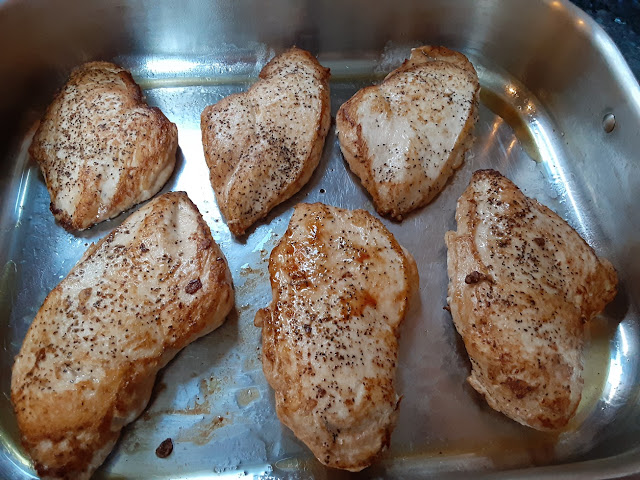 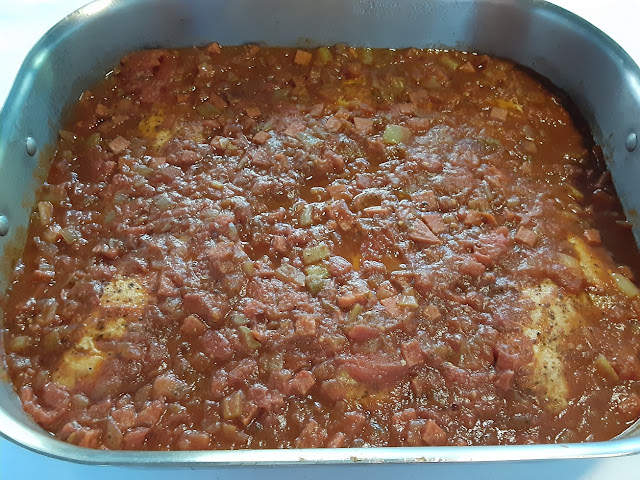 7. Remove from oven and turn to low broil.

8. Top each piece of chicken with large handfuls of cheese using all of it. Sprinkle top with dried parsley, and pop back into oven and broil until cheese has fully melted, about 5 minutes. Watch carefully as all ovens behave differently. (As can be seen with my uneven heating of the cheese). 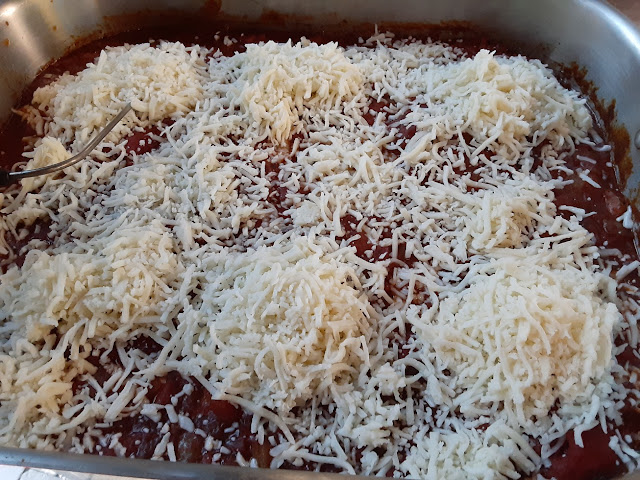 9. Remove from oven and top with fresh parsley sprigs when serving if desired. 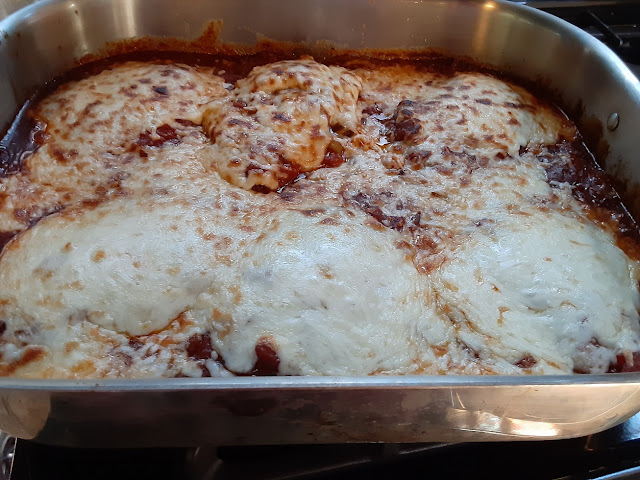 Side with sauced pasta. 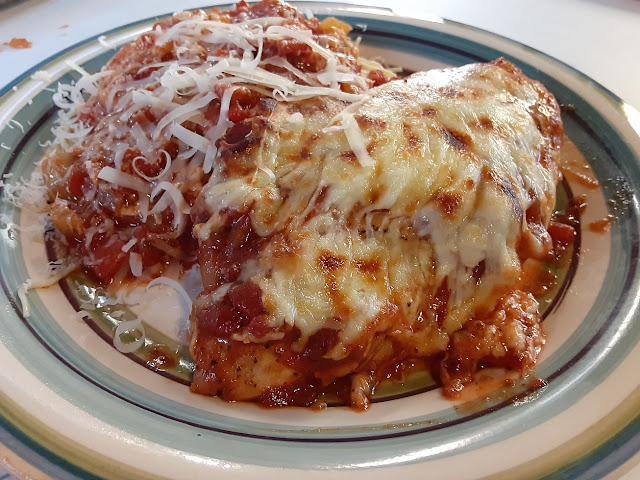 Cindy raved, Bev thanked me several times for a great meal, and Joe thought it might be his best ever meal – I thought it was outstanding.  I flattened the large breasts with the jaccard and once again, they were fork tender.  This is one recipe you may want on your must try list.  After serving five diners, we still had nearly two pieces of chicken left and more than enough sauce.