Shrimp and Scallops in a Roasted Red Pepper Sauce

A few days ago, we were discussing a desire to eat some of the shrimp we had in the freezer and I remembered the recently published recipe for this dish that I had saved form Chef Dennis on his Ask Chef Dennis blog.  The red pepper sauce seemed like a very different way to serve seafood and Bev gave me a “I’m not sure about this” look but I wanted to give it a try as his recipes have always been good.

I generally followed the ingredients list but increased everything for the 36 oz of peppers I had to insure enough for five servings.  You can click on the above link to check Dennis' site for the original recipe and several suggestions. 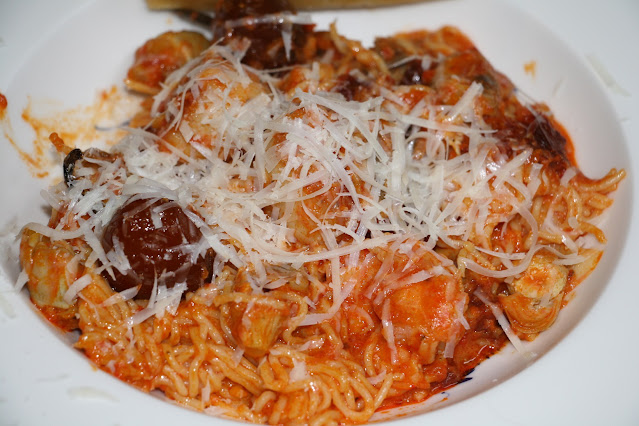 Puree the roasted red peppers until they are as smooth as possible (Larry used an immersion blender with the peppers and cream in the sauce pan). Heat over medium-high heat.

Add the remainder of the ingredients and bring to a slow boil, reduce the heat to a simmer and allow to continue cooking for 1 hour.

*making the sauce a day ahead of time will enhance the flavor. You can make the pepper sauce up to 3 days ahead of time. This sauce also freezes well.

I cooked everything in the kitchen except the final assembly process.  Since I had different folks desiring different things in their meals, I decided to cook each plate to order (like a restaurant) beginning with Pat who requested marinara rather than red pepper sauce and no artichokes.  This is the assembly set up where I added water to jelly roll pans with racks to serve as steam pans then turned on one grill burner and kept the lid closed. 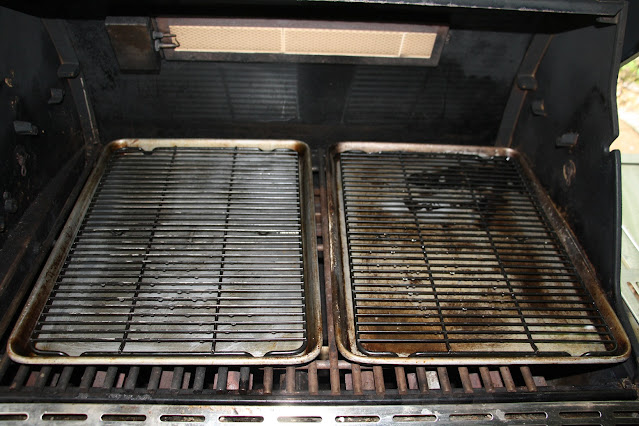 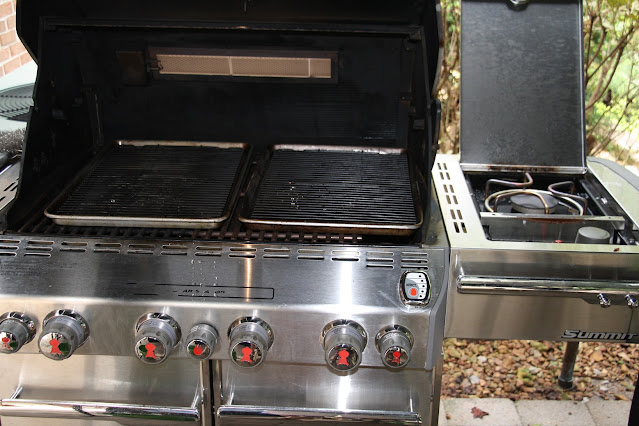 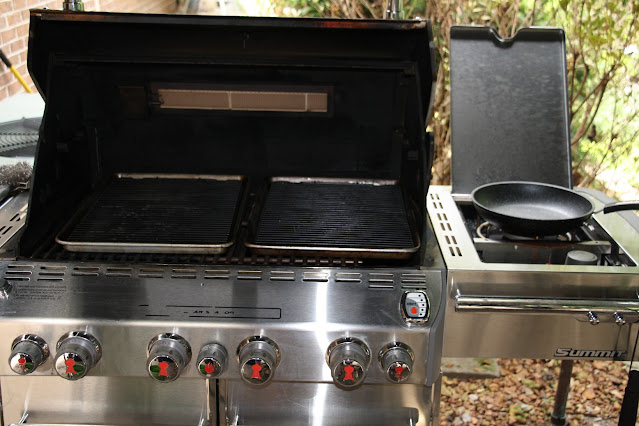 Saute the mushrooms until the liquid is released and add them to the red pepper sauce.

Cook your pasta per box instructions, drain and keep warm in a covered pan.

Saute the scallops in oil and butter until nicely browned on both sides and keep warm in a 125F toaster oven.

Saute the shrimp in the same pan and keep warm in the oven.

Slice the rehydrated sun-dried tomatoes and add to a bowl then add the artichoke hearts and peppers to their own bowls.  Nuke them all to get warm.

Move everything to the grill. 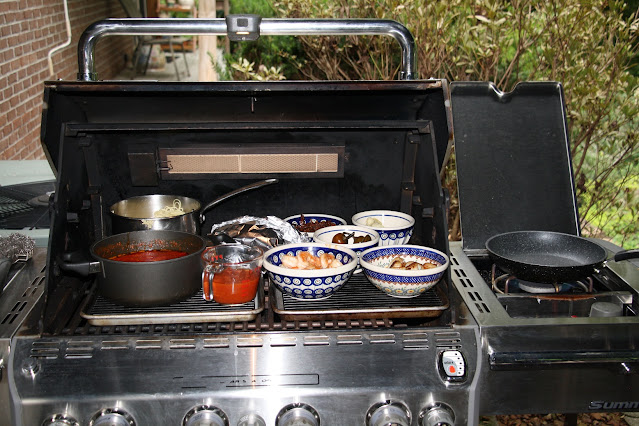 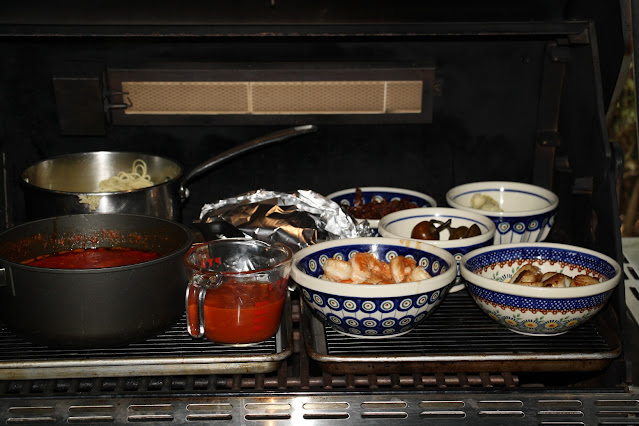 For the typical dish, I added the following to a hot skillet: ½ cup sauce, 3 scallops, three shrimp, 4 artichoke hearts, some sundried tomatoes, 2 peppers, and the amount of pasta chosen by the diner.  While then diner was coming over to select their pasta amount, I already had the other ingredients heating in the pan. 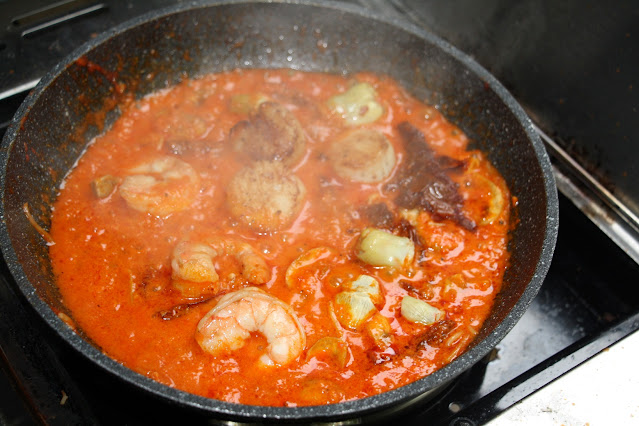 Cook it for a couple of minutes, stirring and tossing until everything is hot and serve in a bowl. 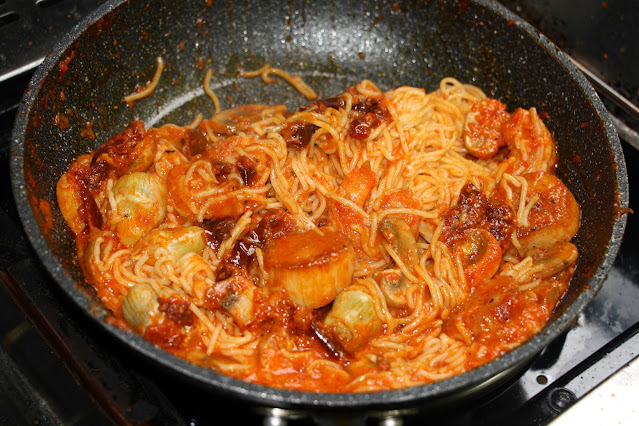 Top with fresh grated parmesan, add a slice of Bev’s homemade garlic bread and serve (this was Bev’s role). 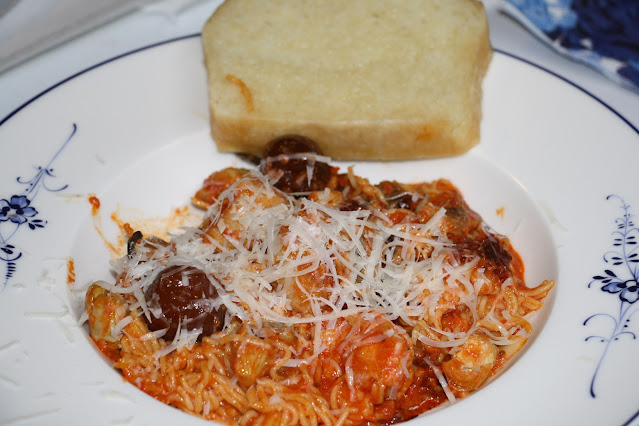 Everyone thought it was delicious and a nice alternative to tomato sauce, although Bev said she prefers marinara, and I would definitely make it again as I really like roasted red pepper sauce, soup, etc.  If you like roasted red pepper sauce, you should give this one a try.  I enjoyed cooking the plates to order and I was able to turn one out every few minutes so not too long of a wait.

All we had left was a serving of pasta and just enough sauce to barely coat it.