Believing I wasn’t much of a fan, it’s been years since I’ve eaten stewed okra and tomatoes, much preferring my okra to be fried but Bev decided it would be a good way to use our extra tomatoes and the okra we were given so I reluctantly agreed.  It was delicious and while the plan was to put some in the freezer, we ate it all over a couple of days so we had to wait a few days to gather more tomatoes and okra before making the freezer batch using the recipe below which was modified from the one from Spicy Southern Kitchen.  The original recipe and more pics like this one can be found by clicking on the link. 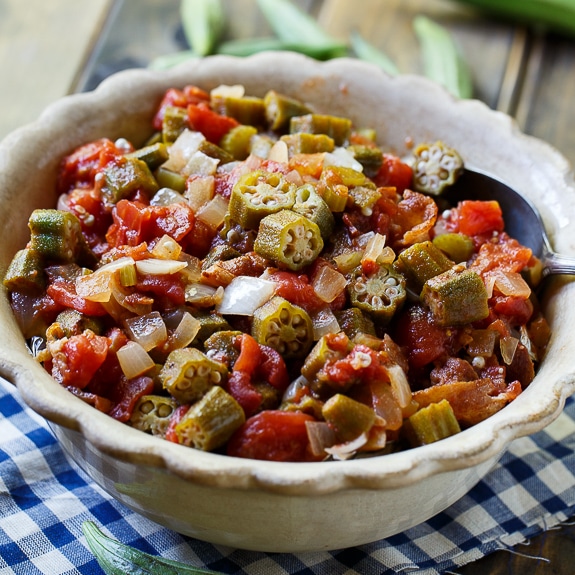 The Ingredients – makes about four quarts

1 teaspoon Tabasco sauce or your favorite, more or less to taste

1/2 cup water or chicken broth, more or less as needed for the macaroni

1. If using canned tomatoes, skip the next couple of steps.

2. Core the ripe tomatoes, cut out any bad places and cut an x on the bottom (allows the skin to separate easier).

3. Bring a large pot of water to a rolling boil, add the tomatoes and cook until the skins are obviously peeling.

6. Add bacon grease to the pot over medium heat.

7. Add onion and green pepper to the bacon grease and cook until soft, about 7-8 minutes.

8. Stir in garlic and cook until fragrant.

9. Add tomatoes, okra, and seasonings. Cook until okra is tender, maintaining a simmer and stirring occasionally. 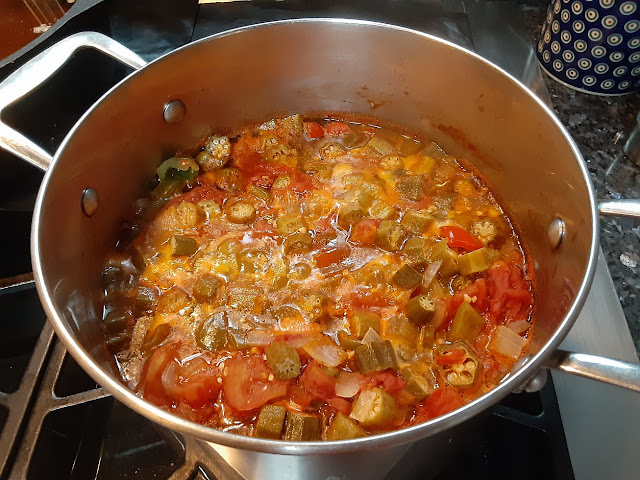 10. When okra is nearly done, add pasta and cook until al dente.

11. Fresh corn cut from the cob is also a nice addition.

Once again is was very good and we had a big bowl to eat after filling and freezing four, one quart bags.