The spectrum of green beans runs from haricots to pole beans or from slim green pods with tiny beans to pole beans with large pods and large beans and everywhere in between.  When Kathy was here this summer, she said she liked the smaller beans sauteed in a little olive oil and I thought yuck – more raw veggies like the restaurants serve as steamed vegetables – my mom cooked veggies done and I still prefer them that way. 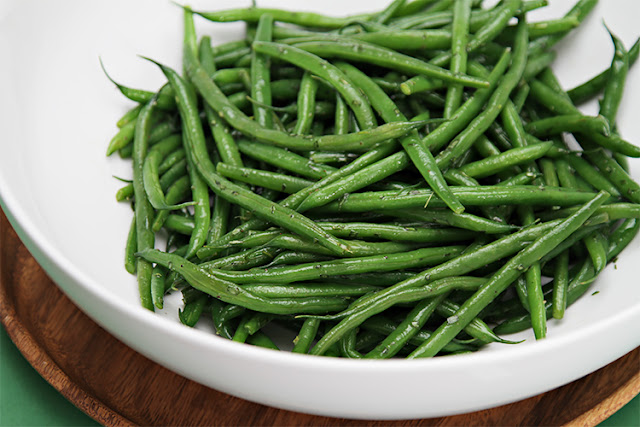 If Kathy's version is the only way you will eat green beans you might want to quit reading here.


The other end of the Kathy version of cooked green beans is grandmas southern green (pole) beans and this is the way I like them but first let me digress for a minute.  Mom’s beans were always cooked for hours and seasoned with several bacon slices and her preference was White Half Runners and so they became my go to version – she thought they were best so why would I consider anything else.  They are between the haricots and pole beans. 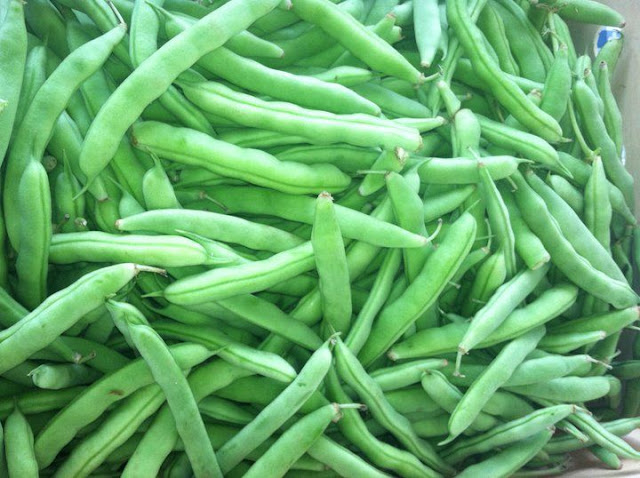 Then I moved to the South and was exposed to pole beans and I soon decided I liked the more intense flavor and lots of beans, cooked nearly all day to get everything tender.  Everything I’ve said so far is a lead in to this days pot of beans which was sided with grilled pork tenderloin. 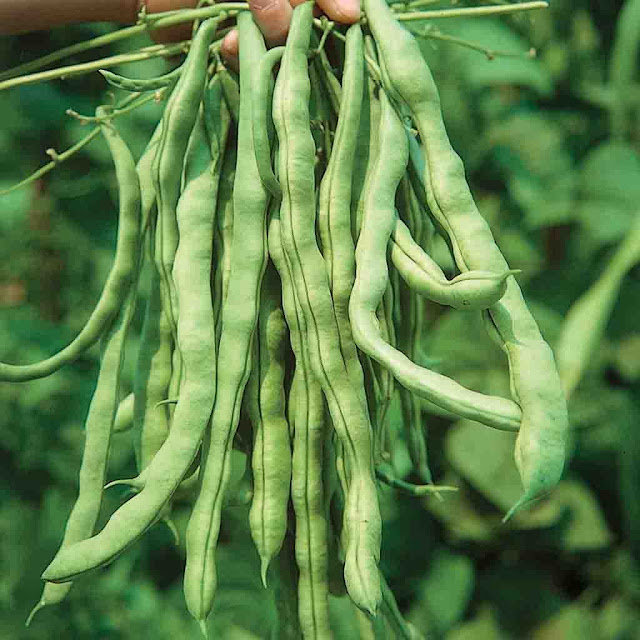 SIL Pat recently went to Benton’s Country Hams while they were thin slicing prosciutto from de-boned aged hams and she brought us back several ham bones and I opted to use the first one to cook green beans and decided to maximize the flavor of the bone which had a fair amount of meat left on it. 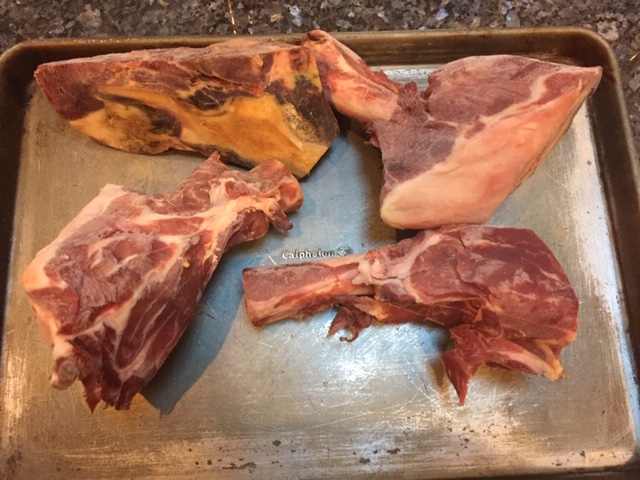 I added the bone to a stock pot, nearly covered it with water, added a lid and simmered it all day, turning several times – it’s shape kept me from completely covering with water so as not to have too much - this is the broth. 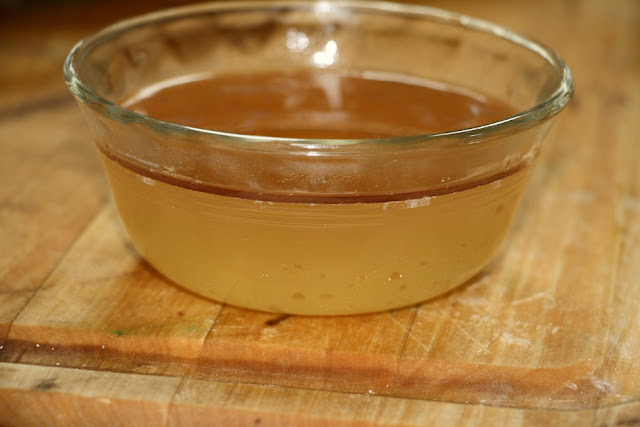 At the end of the day, the pot was cooled, the meat was removed from the bone, chopped and returned to the broth with the bone, and the pot went into the fridge. 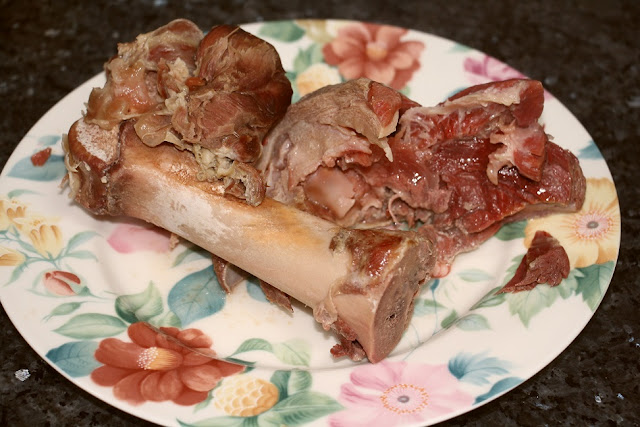 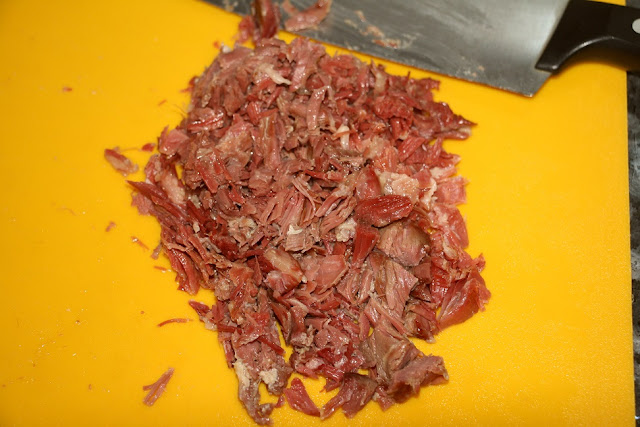 When I went to buy the beans, 3½ pounds, I passed on their two poor looking pole bean varieties and settled for half runners – the last choice of lower flavored Blue Lakes would have been even worse.  The day before cooking, I also prepped the beans which is called "breaking beans" in this area but was called "stringing beans" where I grew up - I'm proficient at both.

On cooking day, I removed the pot from the fridge and removed the hardened layer of fat leaving the jellied broth and the bone.  I started heating the pot and when the broth was liquid, I added the beans, a couple of large cloves of minced garlic, and enough water to cover the beans then covered with a lid and cooked on simmer until the beans were tender –about 3 hours, but pole beans would have needed a couple of more hours. I tasted and added salt and pepper a couple of times during the cook. 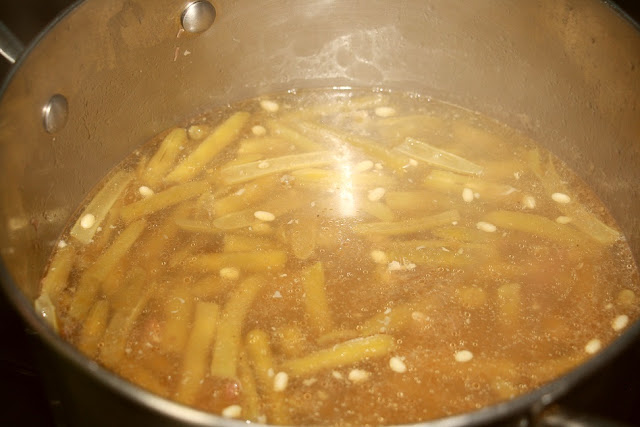 I should have removed the lid sooner to cook off some of the liquid and concentrate the flavor some.

The tenderloin was coated in Montreal Poultry Seasoning, grilled to an internal temp of 138F, rested, and sliced. 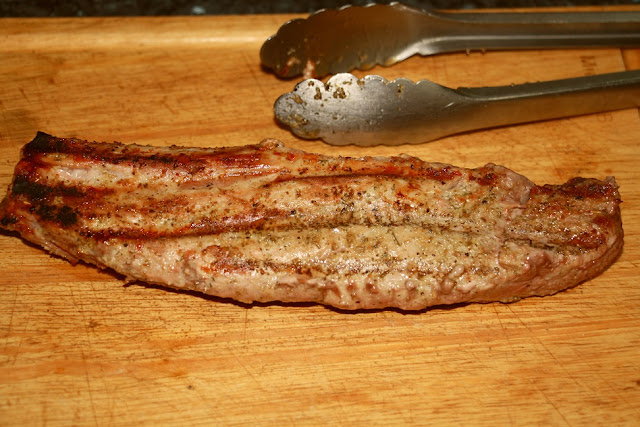 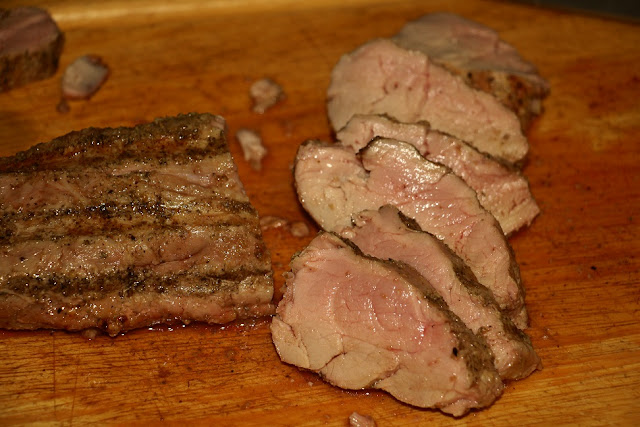 This is my plate and the pork was tasty, moist, and fork tender but these may have been the best half runners ever and I will always try to make up a highly flavored broth for all beans in the future, including dried. 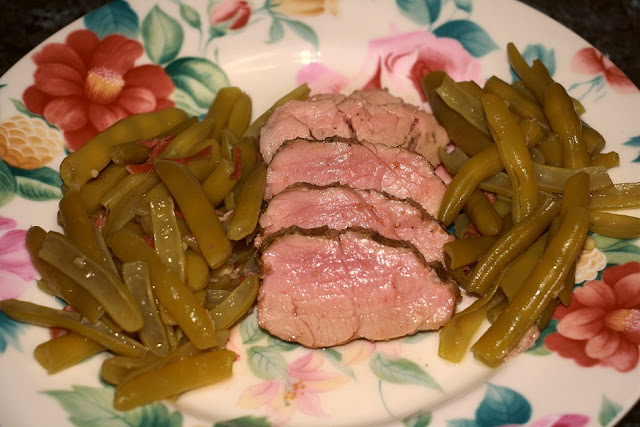 I’m sure cooking the bone all day added much more flavor than just adding it at the same time as the beans and only cooking it for a few hours plus cooking the day before, provided the opportunity to remove the fat.  The next day the dogs got the bone and they were happy campers.