We closed up shop and got on the road about 10:15 for 105 mile run from Savannah up to the Charleston area but first some thoughts on Savannah's Creek Fire Motor Ranch.  They refer to themselves as a resort but they have a way to go to get there but I believe they will.  The place has only been open for about 18 months and they mostly concrete pads with all good utilities except for a terrible WiFi.  Check in was friendly and efficient and they provided a nice packet of information.  The pool area was nice but the hot tub was nearly unusable due to the chlorine amount in the water.  They don’t offer cable TV but some sites have a Direct TV dish that requires using a box provided by them – not an issue since we have our own dish.  It’s about a 25 minute drive into downtown via I-95 and I-16 but there are many stores and restaurants near the resort - if ever again in the area I would stay there.


We rolled in to Oak Plantation Campground, south of Charleston, around 12:15pm and were assigned site G5, got set up, and relaxed prior to going out for supper.  I held my breath, but the low coolant level alarm didn’t come on during the trip.  This is our site which was nearly dead level. 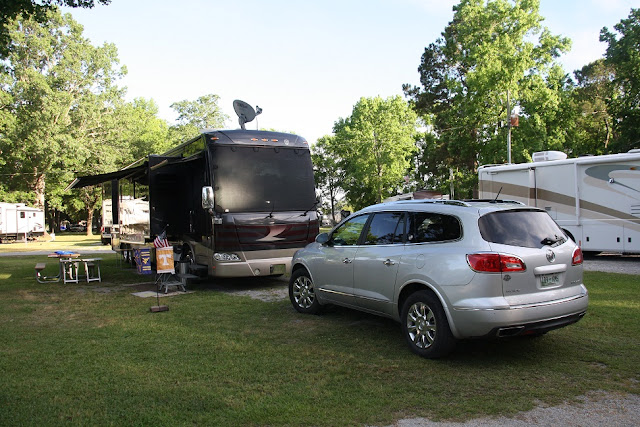 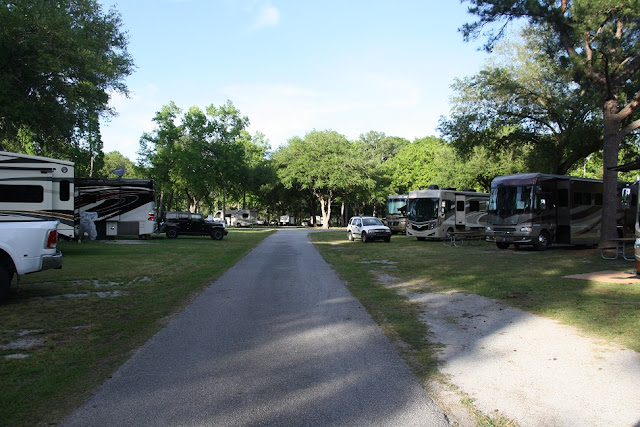 For supper, the group went to Gilligan’s Seafood Restaurant near the campground – I didn’t take any pics but Cindy took a few.  The ladies began with some delicious cocktails and Cindy and I split a dozen raw oysters which were very good but way to small for their $16 price tag - that's a small cocktail fork. 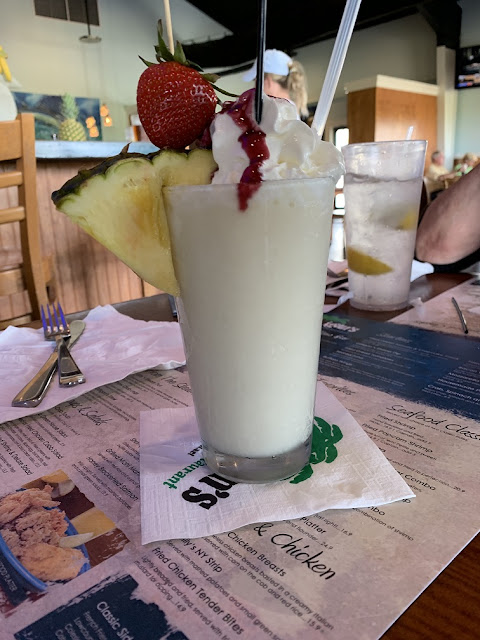 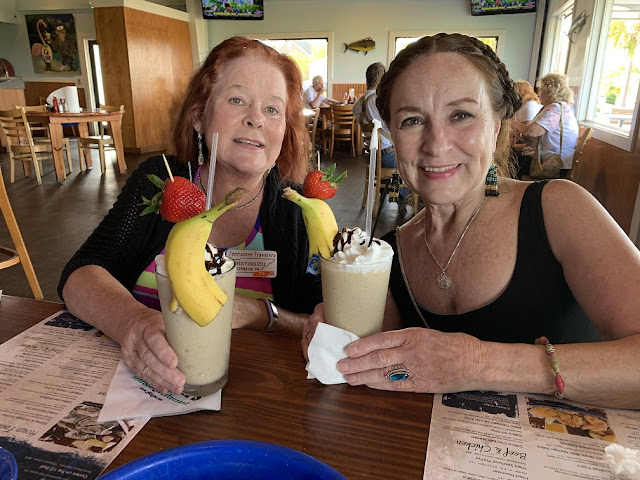 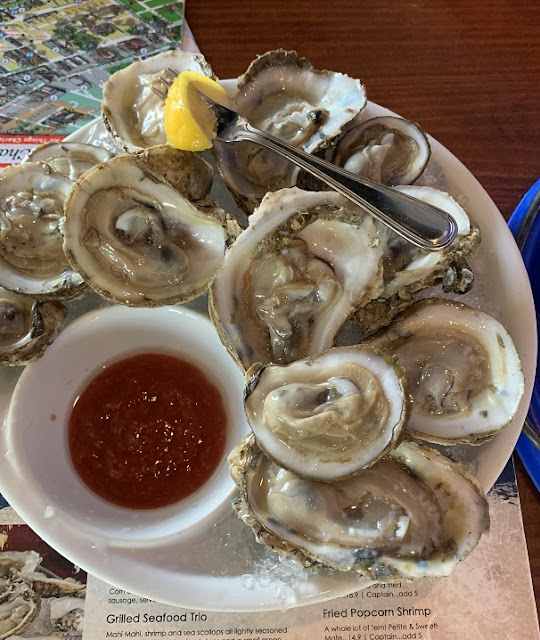 For our meals, Cindy had the Honey Blackened Salmon ($20), Pat had the Shrimp Scampi Pasta ($19), Bev had the Surf & Turf - Blackened Shrimp (the SURF) stack on fried green tomatoes (the TURF). Served over cheesy grits ($10) – definitely a great value. 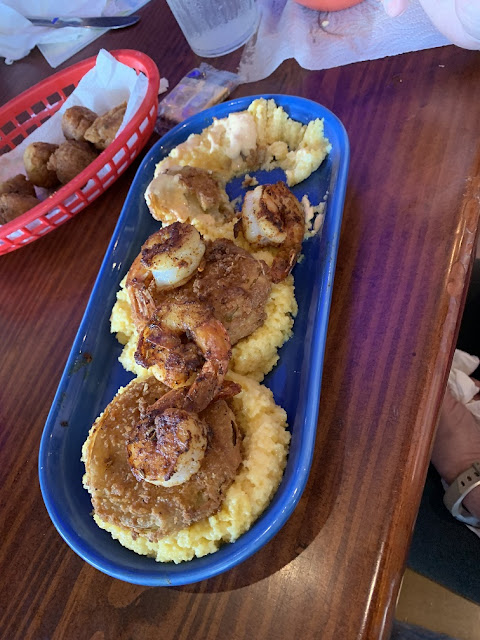 and I had the Fried Shrimp and Oyster Combo ($23).  We all enjoyed our meals and I would go back there again.

On Monday, we began the day by doing some chores such as washing the Love Bugs off of the coach front, then the group went for lunch to another nearby place called Angel Oak Restaurant.  The place was small, not at all fancy and appeared to be where the locals eat, so my kind of restaurant. 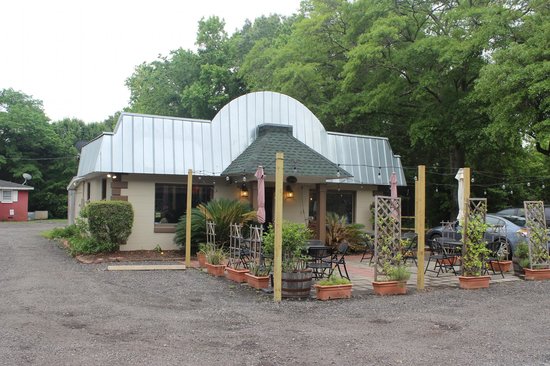 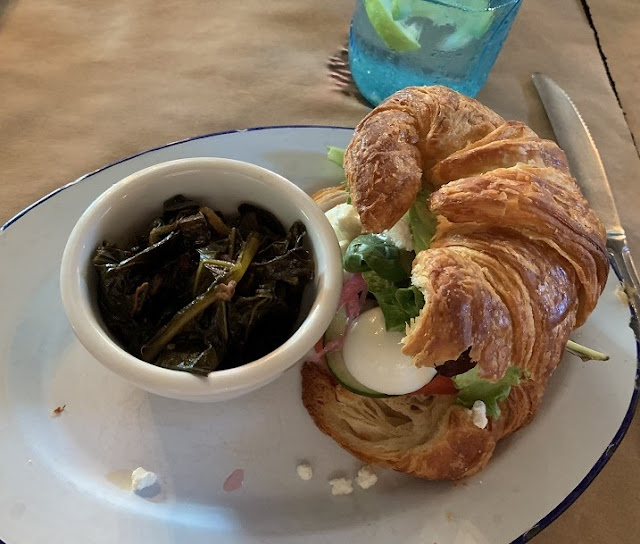 and I had the Daily Special - Boneless, skinless fried chicken breasts over warm biscuit, topped with sawmill gravy, served with a side salad ($12). 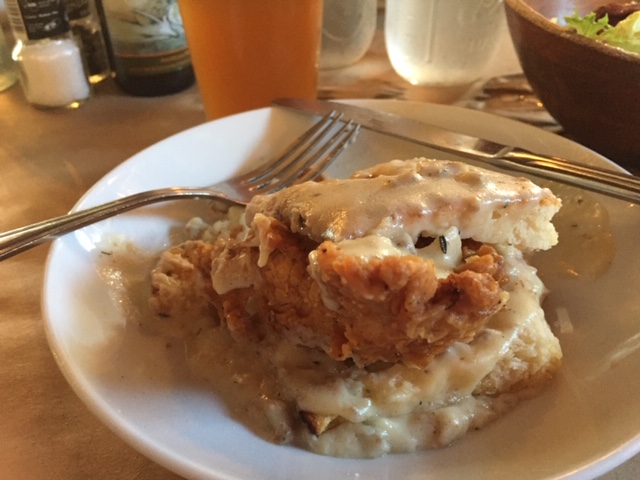 I was planning something different until the server showed us the daily special on its way to another table.

Everyone enjoyed their meals except Bev didn’t get much salmon for the size of her sandwich bun.  However, the unique beignets she ordered for dessert were outstanding – very different and much better than Café Du Monde in NOLA. 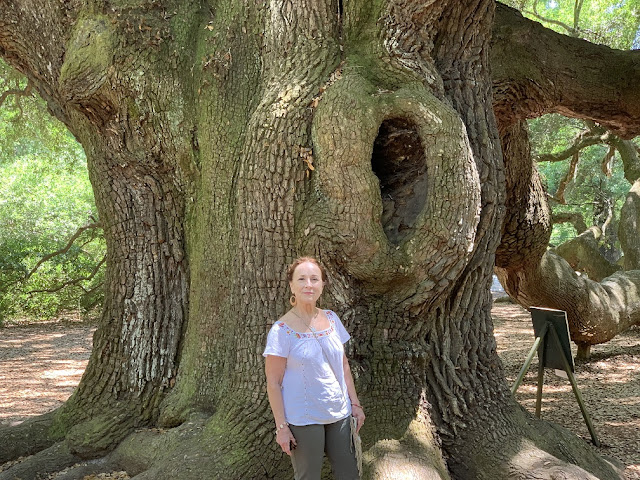 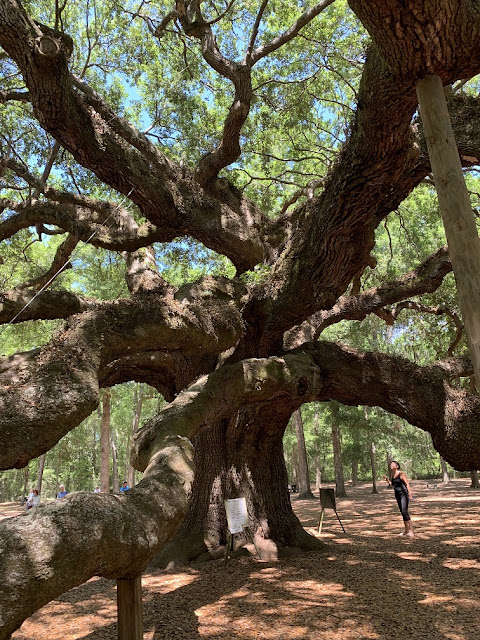 This is our group. 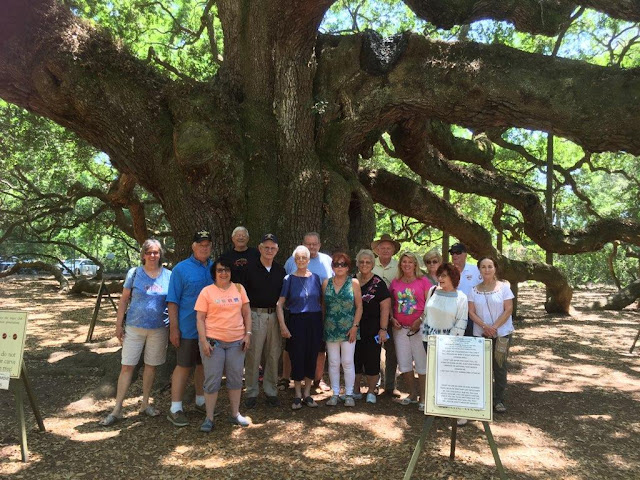 Then for supper we had an impromptu hot dog roast where everyone just brought something they had on hand to share - I like gatherings like that.

On Wed, we went out to Isle of Palms to visit with old friends of mine from college and the best man in my first wedding.