I then began remembering the previous blog posts and decided we would give it a try to make our own using two different recipes for comparison.  The first was from Velva at Tomatoes On The Vine who actually harvested the Meyer Lemons from her own tree.  I won’t recopy Velva’s recipe since I made it as she did but halved it.  Check her site for the details and many shots.
The second recipe was courtesy of Epicurious and is shown below.  Once again, I made only half the recipe shown below and I missed the part about only using half the vodka for the maceration process and I used it all.

Ingredients
15 lemons*
2 bottles (750 ml) 100-proof vodka**(I used Smirnoff)
4 cups sugar
5 cups water
Choose thick-skinned lemons because they are easier to zest.
** Use 100-proof vodka, which has less flavor than a lower proof one. Also the high alcohol level will ensure that the limoncello will not turn to ice in the freezer.

Directions
Wash the lemons with a vegetable brush and hot water to remove any reside of pesticides or wax; pat the lemons dry. Carefully zest the lemons with a zester or vegetable peeler so there is no white pith on the peel. NOTE: Use only the outer part of the rind. The pith, the white part underneath the rind, is too bitter and would spoil your limoncello. Step One: In a large glass jar (1-gallon jar), add one bottle of vodka; add the lemon zest as it is zested. Cover the jar and let sit at room temperature for at least (10) ten days and up to (40) days in a cool dark place. The longer it rests, the better the taste will be. (There is no need to stir - all you have to do is wait.) As the limoncello sits, the vodka slowly takes on the flavor and rich yellow color of the lemon zest. Step Two: In a large saucepan, combine the sugar and water; cook until thickened, approximately 5 to 7 minutes. Let the syrup cool before adding it to the Limoncello mixture. Add to the Limoncello mixture from Step Three. Add the additional bottle of vodka. Allow to rest for another 10 to 40 days. Step Four: After the rest period, strain and bottle: discarding the lemon zest.

I did the first step for 14 days and the third step for 30 days then it was time for a taste test which included the above two and the $72 bottle from Yahara Bay Distillers in Madison, WI that we bought at a specialty shop in Napierville, IL.

I thought both of ours were as good as or better than the Yahara Bay and they were several shades more yellow.  The biggest difference in the two we made was the octane level and as you might expect Velva’s, made with 190 proof Everclear grain alcohol tasted more potent than the one made with 100 proof vodka.  The vodka one seemed a little fruitier as well and it was slightly lighter in color. 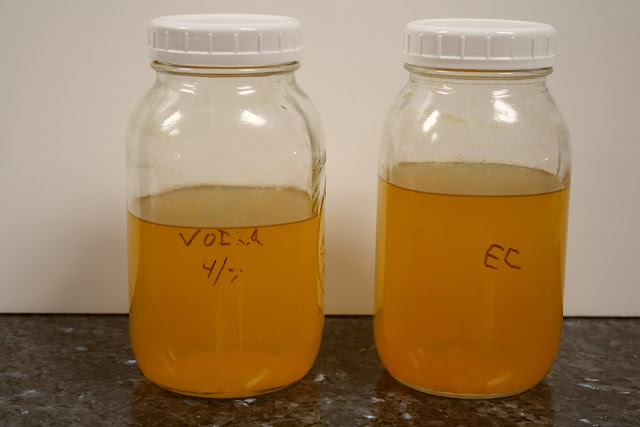 So for me, since I like to drink mine over ice rather than straight from the freezer, I will make the Everclear version next time as it holds up better when diluted with the ice and it’s less expensive – especially compared to the $72 version.  Since it takes about six weeks to make, I need to start another batch now as these first two quarts will not last that long.  If I had used illegal liquor, I would have lemon flavored moonshine.