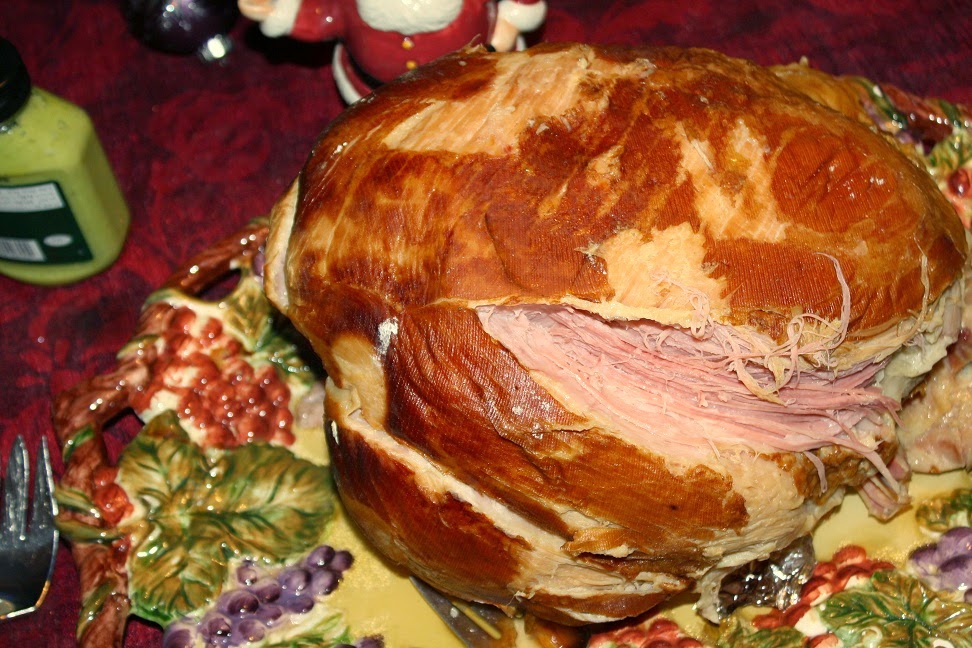 We sided it with a big batch of potato salad so we would have it and the ham as leftovers for our impending RV trip.  The table was also laden with condiments, including naturally spicy homemade mustard, slider rolls, four cheeses, olives and pickles, fruit, cheese ball, and sweets.  The idea was for guests to stop by and visit for a while and just graze while here – seems like every time I saw one friend, she had a piece of ham in her hand so I know she liked it.

Our potato salad recipe is very simple but what I grew up with and still my favorite:

Directions:
1. Peel and dice potatoes to desired size and boil until just tender
2. Boil eggs, peel, and dice to desired size
3. Dice onion and celery pretty small
4. While the potatoes are still warm, mix everything together
5. Let it set a couple of hours un-refrigerated until serving time so the flavors can marry

All of the dozen guests seemed to have a very good time and the ham got rave reviews – it is great for an open house as it requires no attention once it’s on the table and it is still very good and continues to pull easily as it cools.

A Publix Water Roll with a pile of pully ham, a slice of Guggisberg Baby Swiss Cheese, and a slather of the spicy mustard is all that I needed for an outstanding sandwich.  This mild cheese was invented by Alfred Guggisberg in Ohio Amish Country in the mid 60's to satisfy the taste of some Americans who thought Emmental was a bit strong.