We’ve wanted to try making spaetzle and we had a bunch of pork loin roasts in the freezer that need to be used, so we found a couple of good sounding recipes and decided go German.  The menu was pan fried pork chops with cream gravy, spaetzle, and steamed asparagus (as close as we could get to spargel – white asparagus).


Put the flour in a shallow platter and add the onion powder, garlic powder, cayenne, salt, and pepper; mix with a fork to distribute evenly. Pat the pork chops dry with paper towels to remove any moisture and then dredge them in the seasoned flour; shaking off the excess.
Heat a large saute pan or cast iron skillet over medium heat and coat with the oil. When the oil is nice and hot, lay the pork chops in the pan in a single layer and fry for 3 minutes on each side until golden brown. Remove the pork chops from the pan and add  the onions and cook until golden brown. Add a little sprinkle of seasoned flour to the pan drippings. Mix the flour into the fat to dissolve and then pour in the chicken broth in. Let the liquid cook down for 5 minutes to reduce and thicken slightly. Stir in the buttermilk to make a creamy gravy and return the pork chops to the pan, covering them with the sauce. Simmer for 5 minutes until the pork is cooked through. Season with salt and pepper and garnish with chopped parsley before serving.  I cooked them to 145* internal temp. 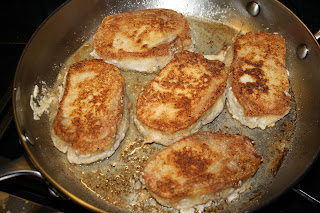 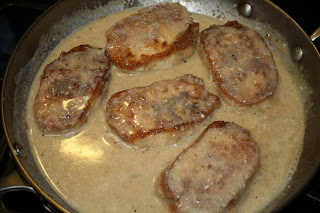 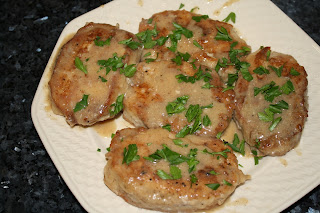 We decided on this recipe for the spaetzle and since Bev just bought a chunk of Gruyere, we went with the cheese part as well but used our pork gravy rather than the sautéed onion.
Spaetzle - courtesy of Roland Radler, owner of Brats Brothers in Sherman Oaks, CA.
Ingredients - adapted
1½ cups all-purpose flower
¾ teaspoon salt
1/8 teaspoon freshly ground black pepper
3 eggs
3/8 cup 2 percent milk
2 cups shredded Swiss cheese
¾ tsp Onion powder (added by us)
¾ tsp Garlic powder (added by us)


Sift the flour and salt and pepper together in a large bowl. Beat the eggs and milk in a medium bowl. Alternately mix the milk mixture into the flour until a smooth dough is formed – more like a thick pancake batter.


Bring a large pot of salted water to a boil over medium heat and add 3 T butter.  Press batter thorough a spaetzle maker (we used a colander) into the water. When the spaetzle float to the top of the water, remove them with a slotted spoon to an oven safe dish. After first layer of spaetzle, add a layer of Swiss cheese. Continue layering until all of the spaetzle and cheese have been used.
Our spaetzle maker was a colander over a pan of water. 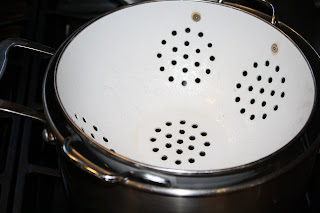 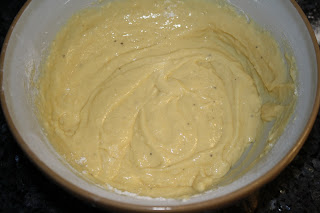 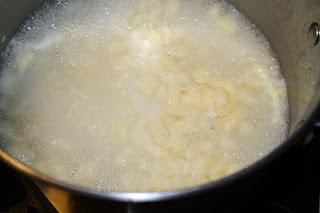 Bake the spaetzle until the cheese is melted, about 30 minutes. 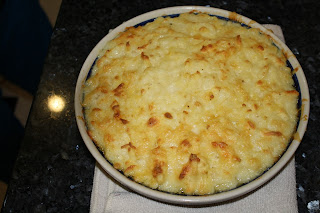 We steamed the asparagus, topped it with grated Gruyere, and popped it in the warm oven for a few minutes. 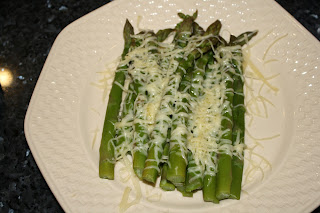 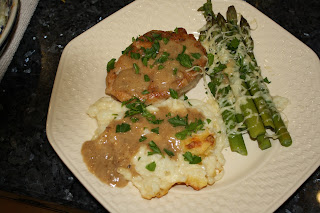