We’ve been trying to eat our bigger meals earlier in the day and wanted to go lighter for supper. Bev had me looking for recipes that used ricotta cheese as we had some getting old. After a little searching, I found a ricotta cheese on flat bread pizza from Bobby Flay, but I had few of the necessary ingredients. I liked the concept and decided to make it with what I had, which meant a southwestern version as I had fresh cilantro on hand, along with some avocados that were getting ripe.

I brushed a little good olive oil on a piece of naan bread, then spread on the ricotta and sprinkled it with taco seasoning, then added some sliced tomato and red onion. I baked this at 350* for 10 minutes, added the cilantro and baked another 5 minutes. 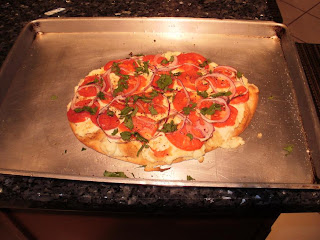 I finally added the sliced avocado, cut and served. 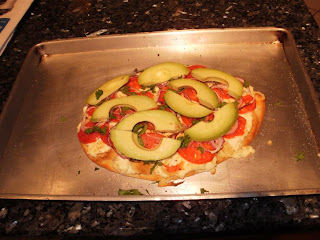 We thought it was ok but weren’t crazy about the ricotta texture in this application. I also thought it needed a lot more flavors and if doing it again would mix the seasonings, cilantro, and minced garlic (which I didn’t use) with the ricotta and taste until I had it right. The tomato, onion and avocado were all fine. A spritz of lime juice at the very end would likely have worked well.

I like it when I try to create dishes even when they just turn out okay because I learn something. I’m confident I can go back in the kitchen and make one much better.