For meal one, we had several green tomatoes we needed to use and opted to make a green tomato BLT since we love BLT’s, we love fried green tomatoes and we often see them on menus.  We used the recipefrom Meatwave, homemade bread, and Benton’s bacon.  The first shot shows my bread ready with mayo (Duke’s), bacon, lettuce, and colby jack cheese and it’s followed by two views after the deep fried tomatoes were added. 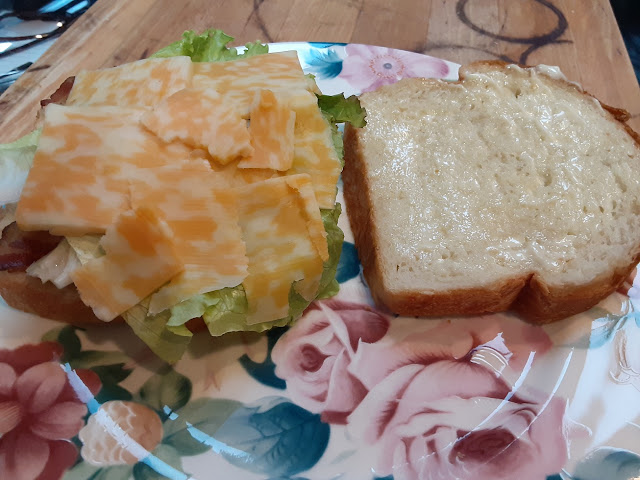 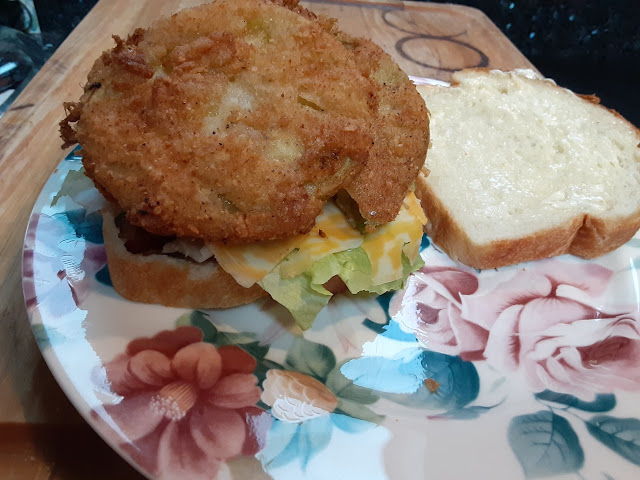 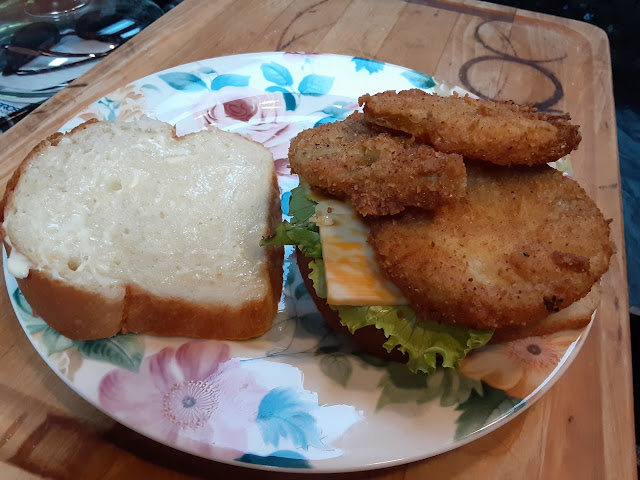 We all thought it was very good but all believe we like a regular BLT using ripe raw tomatoes better.

I can’t recall if I’ve ever made Eggs In Tomato Sauce but I’ve always wanted to.  Sometimes called eggs in Purgatory and it is similar to the Hispanic version of Huevos Rancheros which I really like.  Since we had some sauce leftover for a recent spaghetti and meatball supper, it seemed like the ideal opportunity to whip up a batch.  While many recipes are baked, I opted to cook the dish in a skillet with the lid on it which worked perfectly. 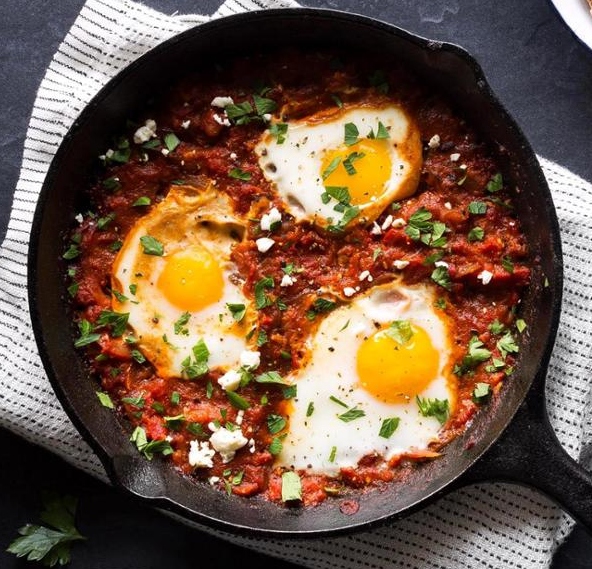 I laid the eggs and sauce on two slices of Bev’s homemade bread (untoasted) and topped with grated Parmesan.

The leftover sauce was delicious and while I enjoyed the dish and it had an appealing appearance, the flavor of the eggs was pretty much lost in the sauce so I’m unlikely to make it again.

Cindy likes to cook once a week and she chose Mediterranean Salmon for this meal  using a recipe from AllRecipes and she followed it as written.

Mix together the olive oil and balsamic vinegar in a small bowl. Arrange the salmon fillets in a shallow baking dish.

Rub garlic onto the fillets, then pour the vinegar and oil over them, turning once to coat.

Season with cilantro, basil, and garlic salt. Set aside to marinate for 10 minutes.

Place the salmon about 6 inches from the heat source, and broil for 15 minutes (if you like your salmon well done, 10-12 minutes for us), turning once, or until browned on both sides and easily flaked with a fork. Brush occasionally with the sauce from the pan. (For next time, we will flip the fish in the sauce prior to serving). 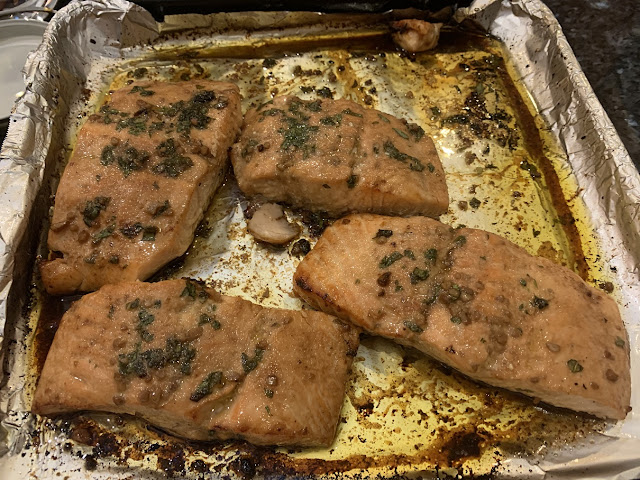 She sided the salmon with tossed salad and spaghetti squash. 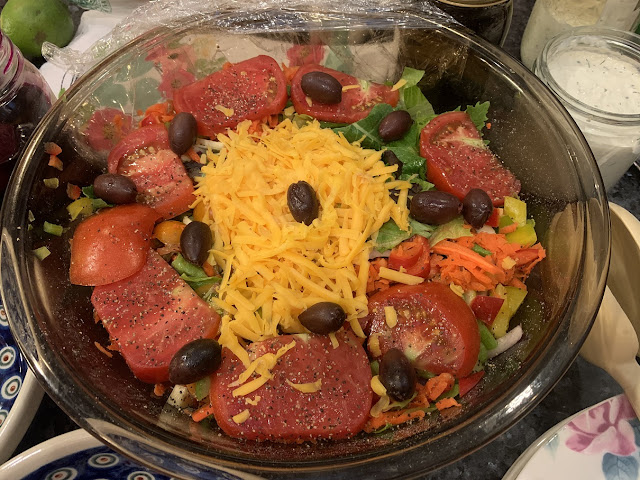 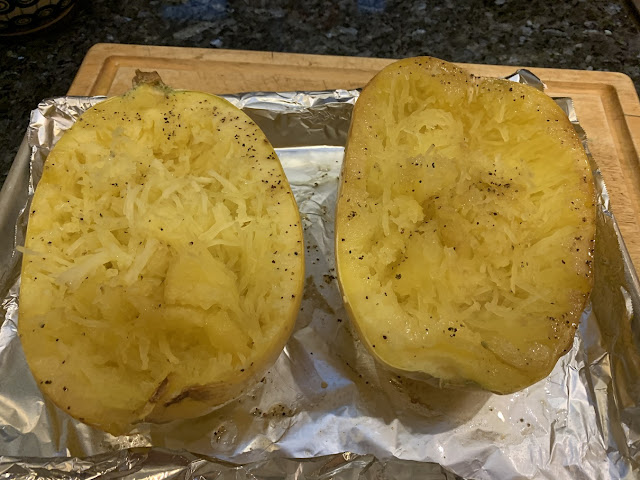 We all thought it was very good and cooked just right for Bev and Joe but a little too much for Cindy and me.  I decided to eat a small piece left on the pan and flipped it on the sauce a couple of times and got an even better flavor than my original piece.  It was easy to make and I would definitely want it again.  I also enjoyed the spaghetti squash, which I had not had in years but will look forward to for the future.

And finally, we had to give Bev her burger fix consisting of six ounces of the neighbors 90% lean ground beef, a toasted brioche bun, colby jack cheese, our homemade dill pickle, our Chreokee Purple tomato, red onion, and mayo & mustard. 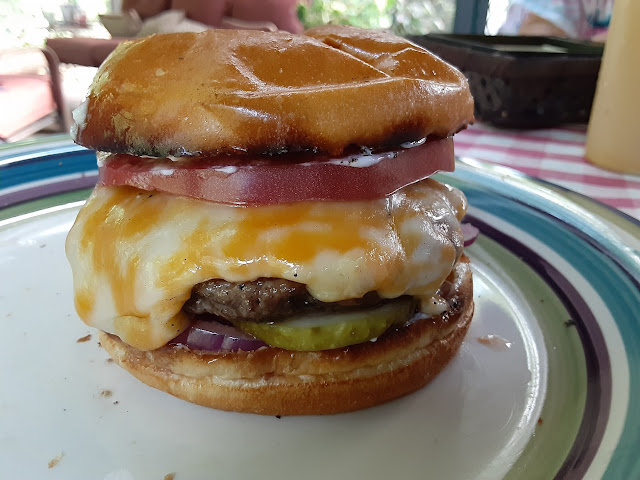 Cooked to pink on the inside, they were juicy and delicious, as expected, and we needed no sides with this big burger.  We didn't arrange the burger for the shot, it just looked this way.