It’s been awhile, and Bev has been craving a Kentucky hot brown, so she bought some sort of turkey roll that contained both white and dark meat rolled up in a net.  I added a little dry rub to the outside and oven roasted it to an internal temperature of 165* which was perfect for the white meat but the dark meat could have used a little more.

I recalled that Chris, from Nibble Me This, had recently posted a great looking version so I headed over to his site to check it out and especially to get his Mornay Sauce recipe:

1. Melt butter in a small sauce pan over medium heat. Add the shallot and garlic and saute until the shallot is tender, about 4 minutes. Whisk in the flour, stirring constantly to form a blond roux.
2. Whisk in about a quarter cup of the half/half and whisk until well blended. Add some more, repeat. Then add the remaining half/half. Bring to a gentle simmer and cook, stirring occasionally, until the sauce is thickened, about 10 minutes.  Remove the garlic clove and discard.
3. Whisk in the cheeses in small batches and stir until well blended. Season with salt and pepper. Sauce should be thick.

The classic version has two slices of bacon crossed on top of the sandwich. 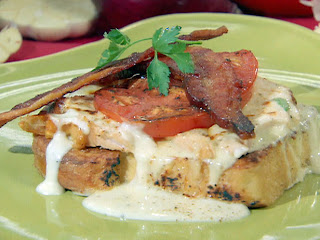 This makes for a nice presentation but makes it harder to eat and get bacon in every bite, so we diced the bacon, fried it crisp, and drained on paper towels. 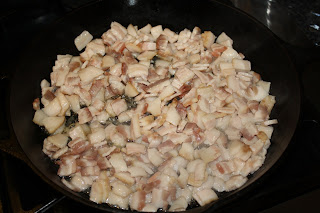 Broil until sauce begins to brown, top with chopped parsley, and enjoy. 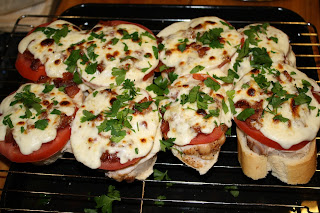 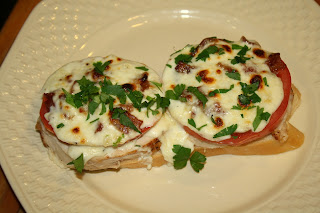 It was very good and I really liked Chris’ kicked up Mornay sauce.  The changes I’ll make next time are use only breast meat, smoke it if I have time, put the bacon on the bread first so it will stay on better, and make more sauce.  Even picky eater Madison ate one and a half of them.

I'm now responding to your comments and hoping you will stop back by - photos best if enlarged by clicking on them.