I’d recently bought two whole pork loins while they were on sale – I’ve decided to stock up a little in case the prices skyrocket next year.  Since this was butcher, bag, and freeze day, I thought some chops cut from one of them would be in order and the idea of baked ones came to mind.


The next light to pop up in my mind, was to look thru “The Estabrook Family Cookbook” recently sent to me by Bob and Lea Ann Brown (Cooking On The Ranch) thinking a family cookbook from people who lived in the mid-west might have a baked pork chop recipe.  Sure enough there it was - Chicken And Stuffing – which I’d already been thinking about, except with pork and the author commented it worked equally well with pork.  So this is the final recipe I used:


6 boneless pork chops, ¾” thick
Brine – recipe below (added by me)
1 can cream of chicken soup
1 C. sour cream
¼ can cream of mushroom soup – left from the broccoli casserole (added by me)
A few drops of Kitchen Bouquet (KB) for color (added by Bev)
1 box stuffing mix - Stove Top for Pork
S&P to taste – Aunt Lena added no salt and with the brine neither did I 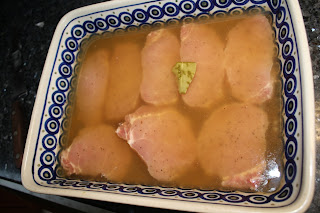 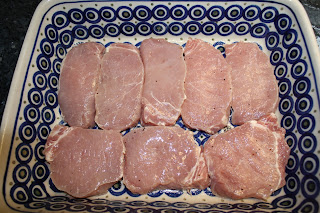 2. Mix together the soup(s), sour cream, KB, and a little fresh ground pepper and spread evenly over the chops. 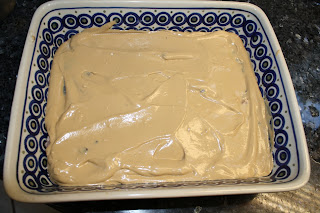 3. Prepare the stuffing mix per package directions plus ¼ cup of extra water for more moisture.


4. Spread the stuffing evenly over the chops and soup mix. 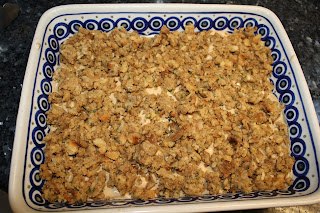 5. Bake uncovered at 350* until chops reach desired doneness – I used a remote probe and pulled them at 137* which took about 30 minutes on convection bake - chicken would take longer to get up to 165* (the recipe says one hour for boneless chicken breasts) 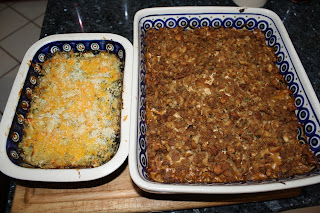 We served it with Bev’s broccoli casserole and fried rice – the rice needed to be used and we wanted to be sure we had something picky eater Madison would eat.  She is our 14 year old granddaughter who is living with us as she did when she was 11 - this should keep us young (or plant us earlier).  Sorry my plate wasn't very pretty. 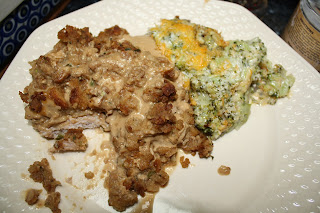 The chops were very good and the only thing I’d do differently is make some biscuits or boil some potatoes to be whipped or hand mashed – there was plenty of good gravy that needed something to sop it up.  After I coaxed Madison to reluctantly try a bite (our food deal), she ate a whole chop and some broccoli casserole - hard to beat good ole comfort food.


I’m not much of a cookbook person, preferring to use your blog posts for recipes, except when given a family, or church, town, etc. book, where everyone includes their old favorites, which are often family heirlooms.  I look forward to the next recipe we try from this book - thanks for sending it to us Lea Ann and Bob.