Bev makes good use of Groupon and the other similar deal-offering services and recently purchased one for “RouXbarb” restaurant in Knoxville.  The deal offered a $130 value tasting for $65 and we recently cashed it in for an early dinner. 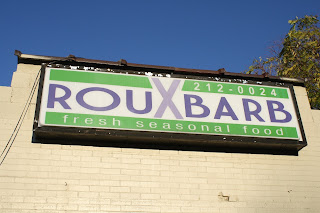 The building is small and has contained several restaurants that we can remember, but upon entering, it was obvious this was a pretty upscale place – at 5:30pm we had the place nearly to ourselves, but it was pretty full when we left.  This is part of the inside and chef/ owner, Bruce Bogartz, is at the computer - he had on tomato pants similar to the ones I wear. 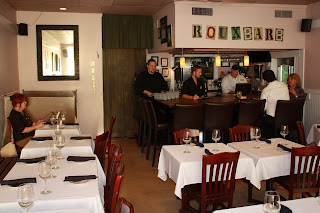 Our server, who was as elegant as the dining room, came by to advise about the tasting, take our drink order, and give us a menu to look over to see if there was anything we didn’t want – Bev advised the duck.  We ordered water and a bottle of Poggio Anima "Belial" Sangiovese and the evening was off.


The menu is comprised of small plates, salads, entrees, and desserts from which we were to be given a selection of the chef’s choices – we got one dish of them to share.

Even though I had the camera sitting there, I got so caught up in the food I forgot to take shots before we started eating, except for two of them.  Rather than do their beautiful presentations an injustice, I’ll only show those two but provide the menu description for those available.


Our meal began with these two, neither of which were described on the menu:
SOUP OF THE MOMENT, which was a curried chicken and rice soup containing and assortment of vegetables
A plank containing two CHEESE BISCUITS, RHUBARB CHUTNEY, and MARINATED MUSHROOMS


Next came a plate containing both of these:
BROWN BUTTER BBQ SHRIMP
Lemon aioli


The next serving was a plate of lightly battered and deep fried flounder and shrimp served with a light sauce – it was also not on the menu, but here is a shot after only a couple of bites: 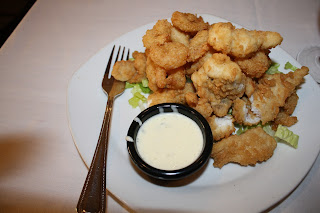 About this time we realized we needed to pace ourselves, especially when the server advised there was lots more to come, so we began boxing about half of each dish – but we were already pretty full.  Our last small plate was:


At this point, Chef Borgartz came by to see how it was going and asked what we wanted for our entrée, advising that in addition to the menu choices he had a nice ribeye steak, and a Waygu beef flank steak.  Since I’d been wanting to try Waygu, we agreed on the flank steak before he even got to the seafood dishes.
While it was being prepared we were served the salad course of:
ROASTED PINAPPLE SALAD
Macona almond praline, goat cheese, and truffled lemon vinaigrette


The FLANK STEAK was cooked medium rare and served with horseradish mashed potatoes and Brussels sprouts. 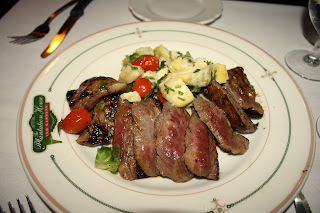 Since there had been easily enough food for four people, we were way past full at the end of the savory dishes and just took the CINNAMON APPLE COBBLER home – we got a taste then Madison ate it.
We loved the flavors of every dish and it was great to try so many at one sitting.  I especially thought the flounder was outstanding with the light batter and it was perfectly cooked.  It was nice to try the Waygu and I can see why people rave about it.  And after this soup I may have to rethink my so-so reception of curried dishes.


I really like restaurants that have daily dishes prepared at the whim of the chef or what's in season.  I hope we can get another tasting deal, but we will be going back either way, as it was a excellent dining experience, with atmosphere, service, and food all being top notch.  I hate I blew it on the photos, but if in this area, we recommend you consider a meal at RouXbarb.