End Of The Garden Supper Two

I love roasted ripe peppers and I love marinara sauce, so when I read Proud Italian Cook and Marie’s recipe for Roasted Red Pepper Sauce And Fettuccini which is a mix of the two sauces, I was on it like “white on rice” as my Dad used to say.  After swapping emails I learned two things from Marie - she cooks the basil in her tomatoes right from the start and she uses about a 70/30 pepper/tomato mix for her sauce.


The previous day I roasted the peppers on the grill – a mix of several sweet bells, Pimentos, Anaheims, Poblanos, and Santa Fe’s– and peeled them in the kitchen, so the pleasing aroma made it’s way thru the whole house. 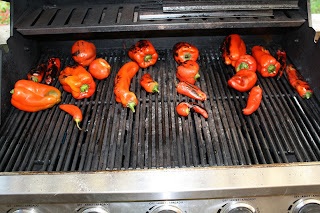 They didn’t get pureed that day as the blender was otherwise being used for a certain Mexican libation my buddy Joe and I were enjoying. 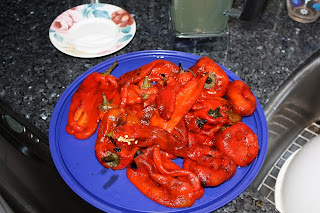 The following day I made the marinara by prepping a jelly roll pan full of paste tomatoes and cooking them until soft.  Then I ran them thru my juice making equipment into a pot and added this much basil. 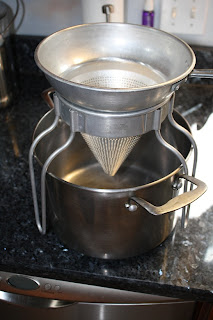 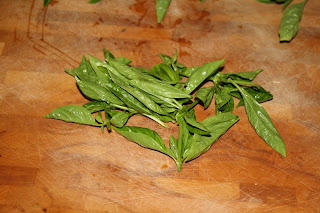 Then took 1/3 of it back out – I’m still trying to learn that it’s easier to add more flavor later than trying to remove too much.  I also added garlic and onions sauteed in 1/3 cup of olive oil. 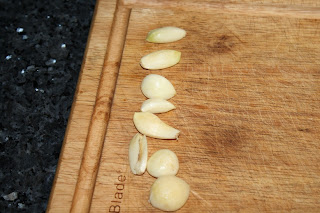 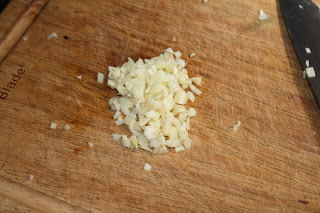 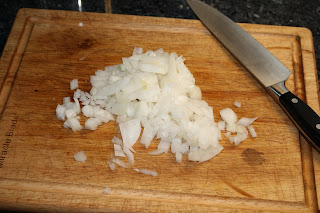 I simmered the sauce about three hours and added salt in four additions for a total of two teaspoons. 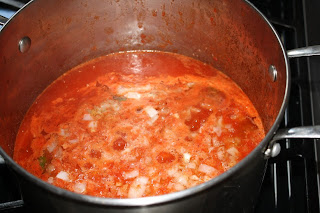 When the tomato sauce was about done, I pureed the peppers, which took about 20 seconds in the Vitamixer and I ended up with a delicious pepper sauce with a good heat to it. 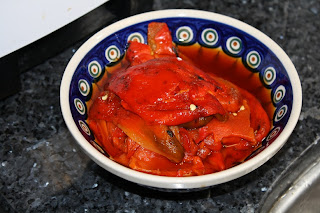 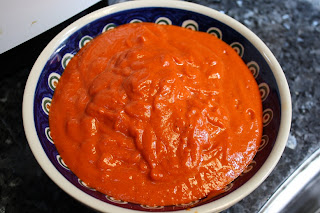 Then I mixed the pepper and tomato sauces 50/50 and heated it in a separate pan.  After tasting, Bev thought she’d like more tomato sauce so I made it 2/1 tomato then we re-tasted and decided we preferred the original and I went back to 50/50.  At this point, I stirred in some more basil (chiffonade).
To serve, I added drained pasta to our bowls and stirred in some mozzarella cheese and green and kalamata olives, then topped it with the mixed sauce, and grated parmesan. 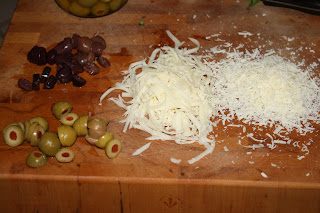 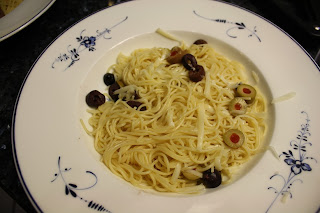 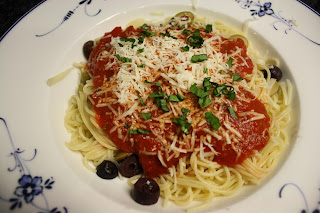 Bev decided she wanted some meat on hers and nuked a smoked chicken breast which I always have in the freezer for her to use like this, on salads, etc.

She nearly always adds crushed red pepper to her pasta dishes, but suprisingly said this was a little warm for her.  Next time, I’ll blend the sweet and chile peppers separately so I can control the heat level.
As expected, it was very good and after supper I mixed the remaining sauces for other uses – it was about 75% tomato.
All photos can be enlarged by clicking on them.
Have a great day and thanks for stopping by Almost Heaven South.
One year ago:  Muffuletta Flavored Omelet
Two years ago:  None
Larry
Posted by Big Dude at 4:38 AM